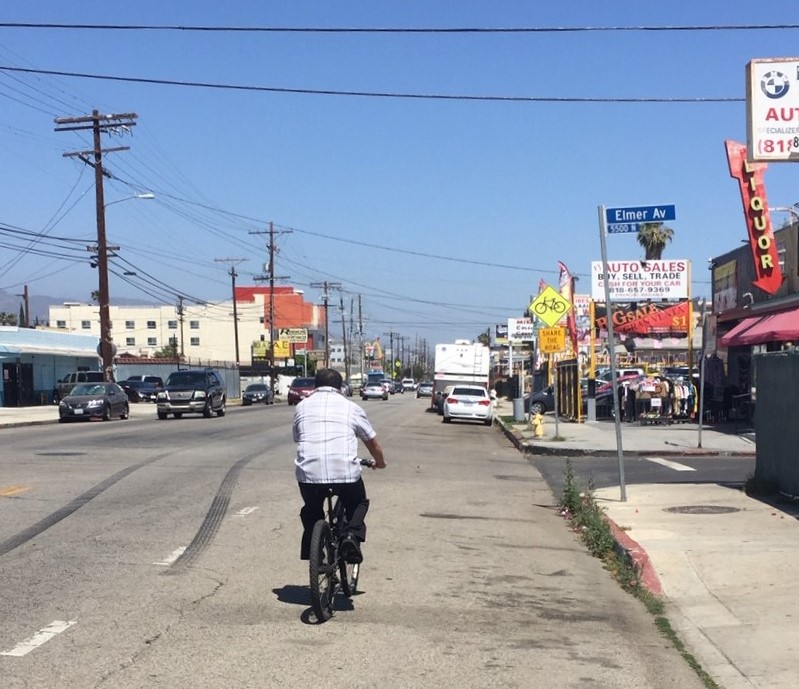 The city of Los Angeles is planning to spend $11 million to widen a 0.7-mile stretch of Burbank Boulevard in North Hollywood to “Major Highway Standards.” The stretch in question is from Lankershim Boulevard to Cleon Avenue – just a block north of the North Hollywood Metro B and G Line station.

The L.A. City Public Works Department Bureau of Engineering and L.A. City Councilmember Paul Krekorian are hosting a video conference meeting on Thursday June 10 from 11 a.m. to 12 noon. To join the Zoom session, go to the BOE project website.

The roadway width varies, but currently it is mostly about 50 feet wide. The city’s 2015 Mobility Plan (page 20 map) designates this part of Burbank Blvd as a “Boulevard II,” which the plan states (chart page 19) should be a 110-foot right of way consisting of an 80-foot wide roadbed and 15 feet worth or sidewalks on each side. Widening to the full approved 110-foot right-of-way standard on this part of Burbank would require removing several recent buildings.

A city notice states that the street will be widened on both sides by 12 feet – so it appears that the total street width will go from 50 feet to 74 feet.

A few blocks of the existing street already have bike lanes, which are also in the Mobility Plan. Streets for All founder Michael Schneider discussed the project with city staff who confirmed that the widened street will include unprotected bike lanes for the entire length of the project. It appears that the widening will also add a car lane in each direction. Pedestrians today have to cross two travel lanes; if this project is built there would be four lanes to cross.

“While the addition of bike lanes is great, we don’t need to widen a street to do that” stated Schneider. “Widening only really serves people in cars – and is contrary to our climate goals and Vision Zero, which ironically this project claims to support.” As with all the city’s ongoing street widening, the project violates Garcetti’s executive directive on climate.

For several years, the city has been purchasing street easements for the widening, and extracting an easement in front of new developments.