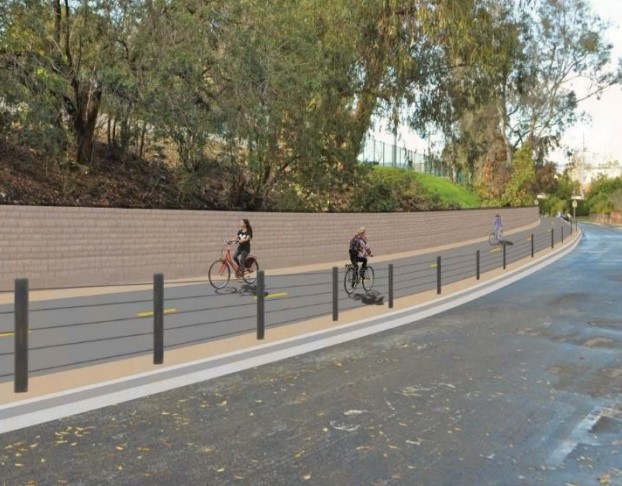 This week, City Councilmember Paul Koretz and the L.A. City Department of Transportation (LADOT) held a meeting to share plans to construct a new section of the Expo Line bike/walk path. The new facility would close what is known as the Northvale Gap, where the train and future bikeway parallel Northvale Road in Cheviot Hills.

Though most of Expo Line path was part of the light rail project that fully opened in 2016, there is a roughly three-quarter mile gap that was left out – located between the E Line Westwood/Rancho and Palms stations. To travel between existing Expo path segments, Cyclists currently take a hilly sharrow-ed detour route on Northvale Road.

Despite some resistance from some neighbors (who also opposed the train), LADOT and Koretz hosted meetings on this gap closure project, and quietly assembled the funding for it.

Early on, the plan was for the Expo walk/bike path to be located in Exposition rail right-of-way, but around the 10 Freeway, the site is constrained. In this stretch, just west of Motor Avenue, the new path will run just north of the 10, where E Line trains run south of the freeway. To make this work, the bike path will be located on an existing undeveloped easement already owned by the city. To use the site for a path, the city has had to acquire additional easement rights from underlying property owners. The acquisition process involves portions of 13 private properties, as well as city, Caltrans, and Metro properties. The city has already acquired some of the easements, and anticipates finalizing that work this summer – potentially involving some eminent domain of already-undevelopable right-of-way.

Between Motor Avenue and Dunleer Drive, the path will essentially be in a shallow trench, between the 10 Freeway and the backyards of homes.

Between Dunleer Drive and Overland Avenue, the path will be at sidewalk level along the south side of Northvale Road – running adjacent to (north of) the E Line.

LADOT anticipates that construction will begin in 2022 and be completed by 2025.

To learn more about this project, watch the full Expo path city meeting on LADOT YouTube.