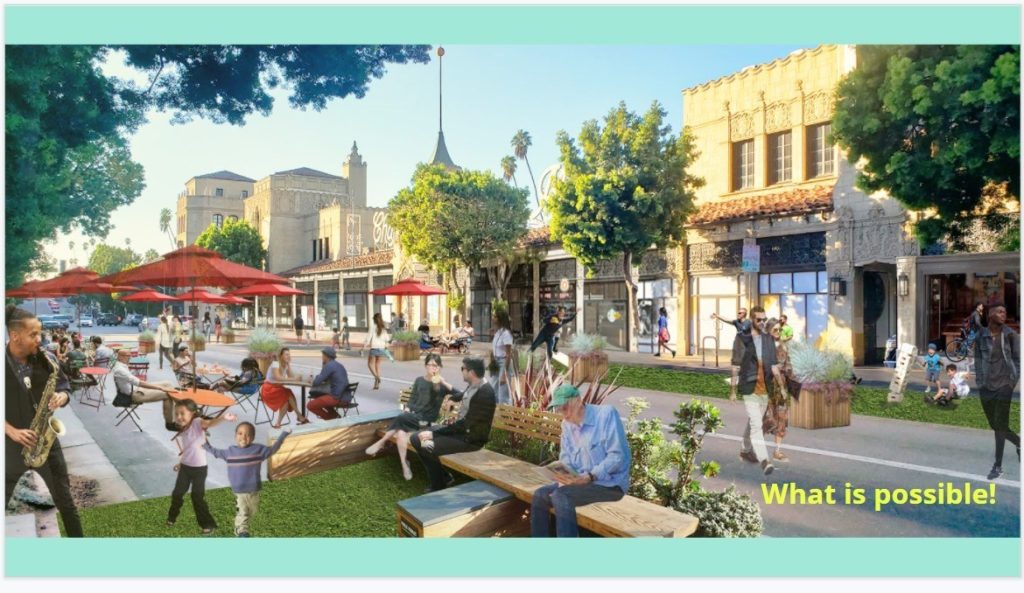 WCKNC justifies the proposal for three reasons: making streets safer from traffic violence, helping provide foot traffic to local businesses, and providing open space for what they term “the most park-poor neighborhood in Los Angeles.” Per a WCKNC presentation, “Koreatown only has 0.5 acres of park space for every 1,000 people, compared to 9.2 acres of park space for every 1,000 throughout the city of L.A.” According to the L.A. Times, the L.A. City neighborhood of Koreatown has a population density of 42,611 people per square mile, which puts it among the highest in Los Angeles and the nation.

Neighborhood Council President Adriane Hoff described the project as a public park configured somewhat similarly to Santa Monica’s Third Street Promenade, with drivers able to cross Sixth at some streets, but not to drive along it. Hoff emphasized, in contrast to the promenade, that the Sixth Street project is community-led, rather than the product of an outside developer calling the shots.

The WCKNC is seeking broad community feedback. People interested in giving input on the proposal are encouraged to take the WCKNC survey. Hoff noted that multi-lingual informational materials are coming soon.

Hoff stated that the idea is to do a relatively inexpensive quick-build installation, which could be modified later – scaled up or down – depending on how things go. She said that the project could be part of the city of Los Angeles Al Fresco program to facilitate outdoor dining during the COVID-19 pandemic.

There is an earlier precedent for closing part of this section of Sixth Street. In 2002, when the South Korean men’s soccer team advanced far into the knockout rounds of the World Cup, huge crowds of fans watched matches together, packed into a closed-off portion of Sixth at Alexandria Avenue. Perhaps, post-COVID, a pedestrianized Sixth Street can serve as a gathering location for crowds to come together to watch future events – such as the World Cup and/or the Olympics.

Next Monday, February 8, at 6:30 p.m. the WCKNC will discuss and vote on a letter to City Councilmember Mark Ridley-Thomas to support pedestrianizing Sixth Street. The meeting agenda will be posted at the WCKNC website.