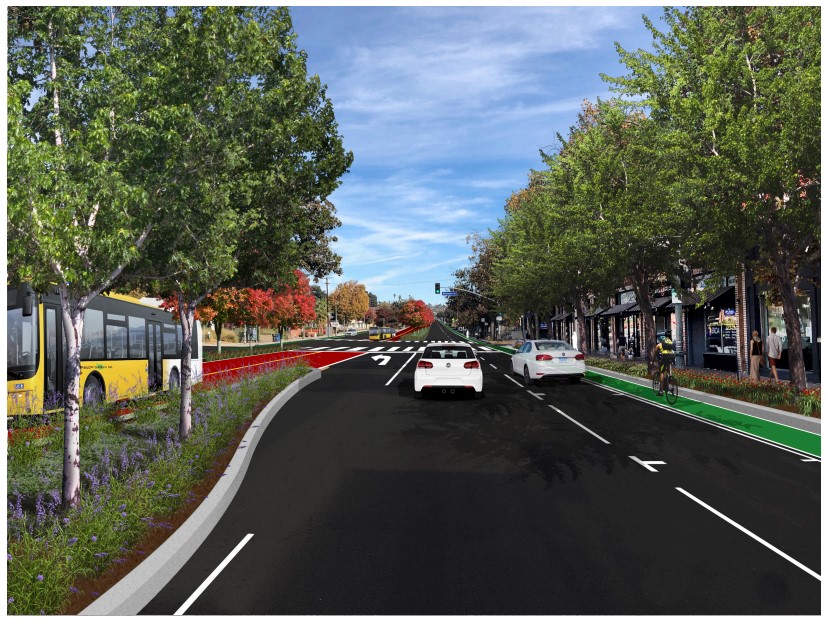 Yesterday, Los Angeles City Councilmember Kevin de León circulated a statement that somewhat clarifies his position on Metro’s planned Bus Rapid Transit project through Eagle Rock. Councilmember de León is seeking an alternative “maintaining two through lanes” for drivers. This which would be incompatible with the community-led Beautiful Boulevard proposal supported  by many community groups, local businesses, and other elected officials.

If you’re going to wax on about a place’s smalltownness, @kdeleon, then tell the full story of why it is like that, no? Eagle Rock was built as a white enclave and many of those same exclusionist sentiments can be heard in the objections to the BRT project now. https://t.co/9KRXvonl9D pic.twitter.com/eUbxhbyph3

The de León statement was shared in a Boulevard Sentinel article late yesterday. The Sentinel, which has emphasized voices opposed to BRT in the past, reported that de León had shared the statement on social media, but this does not appear to be the case. (There is no Facebook or Twitter post where people can respond directly to de León.)

In the statement, de León dwells mostly on the process, rather than on the substance of BRT project alternatives. He states there has been a “lack of open dialogue and… robust discussion comparing alternatives” and asks that Metro “hold a series of well-advertised and COVID-safe in-person meetings” for community feedback.

I have yet to see @metrolosangeles for this, or any project, cite meetings or opinion surveys of riders of specific transit lines along the corridors in question. They do generalized rider opinion surveys, but when it comes to slides in a deck showing outreach, I’ve never seen it https://t.co/7jbgNxzpvn

Metro has been holding meetings about this project since the middle of 2019 (and even before that.) And they haven’t been pretty. Transit supporters – who were boo-ed, shouted at, harassed, and heard ethnic slurs – described earlier meetings as “toxic” and “exhausting.” In-person meetings have elevated NIMBY voices and have not been good settings for getting input from people who actually ride transit. Metro actually had to retool its meeting format in order to tone down Eagle Rock hostility. Even last month, Metro’s virtual input meeting for this project included plenty of condescending public comments about how only homeowner concerns were legitimate, and how others were not “true stakeholders.”

Metro was due to approve the BRT project this month. More meetings may not kill the project, but would unnecessarily delay it.

Kevin de León campaigned as leader who would address climate issues, support zero-emission transportation, and invest in public transit. With yesterday’s statement, it appears that he now siding with reactionary anti-transit voices, rather than those working in support of the livable future he once espoused. There is open speculation that de León is eager to seek higher office, likely entering the race for Los Angeles Mayor, which would give him four votes on the Metro board. His inability to support transit riders in Eagle Rock doesn’t bode well for how he might treat transit riders throughout the county.

Will a few more meetings convince the councilmember to support equity, the environment, and effective transit? Time will tell.