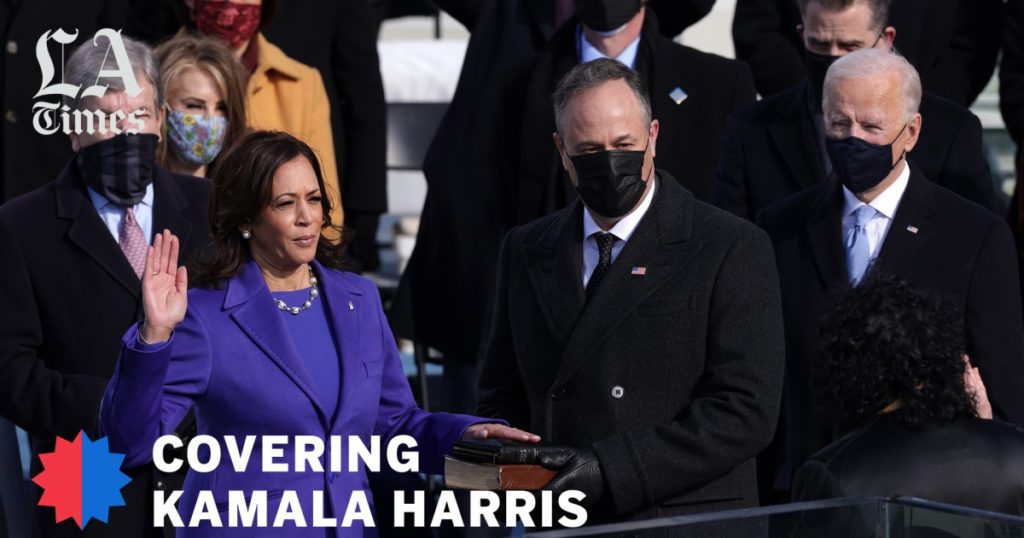 Kamala Devi Harris strutted between the metal barricades and the sparse crowd along Pennsylvania Avenue, clutching her grandniece’s hand and waving at cheering supporters. As she approached the White House, she locked arms with her husband and walked between the gates and up the stairs of the Eisenhower Executive Office Building, the trumpets blaring as she made history.

For the first time since the country’s founding, a woman — a daughter of immigrants from India and Jamaica — was entering the heart of American power as vice president.

“Just walking to work,” she said along the way, laughing.

It was one of many scaled-down moments Wednesday, an Inauguration Day for Harris that was at once symbolic and prosaic, marking her achievement as the 49th vice president with nods to the personal and the historic.

Supreme Court Justice Sonia Sotomayor, the high court’s first Latina, mispronounced Harris’ first name — leaning on the second syllable — as she swore in the vice president with Bibles owned by the late Justice Thurgood Marshall, the court’s first Black member, and Regina Shelton, a childhood neighbor whom Harris regarded as a second mother.

“Little girls and boys across the world will know that anything is possible,” Sen. Amy Klobuchar, a Minnesota Democrat who was among Harris’ and Biden’s rivals for the presidential nomination, said from the lectern minutes earlier.

In his first address to the nation as president, Biden pointed to Harris’ place in the arc of history, noting that women demonstrating for the right to vote at Woodrow Wilson’s inaugural 108 years ago were beaten for their efforts.

Among a small group watching from the VIP section were fellow trailblazers, including President Obama, the first and only Black president, and his wife, Michelle Obama, and Hillary Clinton, the first woman to win a major party’s presidential nomination. Harris’ family, including her two adult stepchildren and her sister, Maya, stood nearby — the most diverse family ever to reach the national political stage.

“Watching this with my 6-year-old daughter, who has known Kamala her whole life, is more moving than I thought it would be,” said Laphonza Butler, a former senior aide to Harris. “To see Maya in the background, to see Doug standing with pride, makes me think of the sacrifices of so many, past and present, on whose shoulders she stands.”

Harris’ parents were civil rights activists. As a toddler, she was pushed in a stroller through the Berkeley Hills to protest marches. Many of her supporters see the former California senator’s ascent as a rebuke to President Trump’s anti-immigrant, nationalist rhetoric, and the nativists who stormed the Capitol two weeks ago in hopes of overturning the election.

Yet for all the barriers Harris, 56, is breaking, the celebration was muted. She and Biden kept it deliberately so, to prevent the further spread of COVID-19, which has killed more than 400,000 Americans, and to avoid additional violence.

The main events of the day — the oath of office, speeches with congressional leaders and the laying of a wreath at Arlington National Ceremony — were performed in quiet, without the large crowds of past inaugurals.

“We would not let an insurrection stop this major day in our lives,” said Glenda Glover, president of Tennessee State University, a historically Black institution.

As president of the Alpha Kappa Alpha sorority, Glover declared Wednesday to be Kamala D. Harris Day in honor of the fellow member. She marked the occasion wearing a pink suit and pearls, and reflected on how much Harris’ success meant to her predecessors who had faced “rivers of segregation, rivers of discrimination, rivers of humiliation.”

“They thought they would never see this day,” Glover said. “But Kamala has made it to the other side.”

Kylie Burke, a junior who serves in student government at Harris’ alma mater, Howard University, watched on TV from her downtown apartment, the Washington Monument visible out her window. She said the big change would come for the next generation below her, who will now grow up thinking “this was automatically possible.”

“That’s where we’re going to really see the beauty in this in the long run,” she said.

Donna Brazile, the first Black woman to lead a major presidential campaign in 2000, said the inability to share the glee in breaking the metaphorical glass ceiling adds a glum note.

“The glass is now all around us, but we can’t walk on it,” Brazile said. “We can’t celebrate.”

She contrasted the divisive mood in the country with the sense she felt in 2009, when even many of Obama’s opponents seemed proud and hopeful that the country had turned a page.

“This is a moment to celebrate the history we all made, but it’s also a moment that we should be cautiously optimistic about the work that lies ahead,” she said.

Democratic Rep. Barbara Lee of Oakland, a longtime friend, wore pearls in solidarity with women around the country as an homage to Harris, who has worn them at significant events throughout her career.

But Lee, one of the most liberal members of Congress, wants more than symbolism. She said she plans to press her friend on “my agenda,” underscoring the pressure Harris will be under to balance her party’s progressive base with the new administration’s promise to unite the fractured country.

Harris’ supporters hope she will not only advocate for their issues, but also have power within the administration, which is stocked with Biden’s longtime advisors, to enact them. Biden, who served eight years as Obama’s vice president, has promised to treat her as a partner, the last person to advise him on crucial decisions.

A Pew poll conducted this month found that 55% of American adults believe Harris will have the right amount of influence within the administration, while 36% said she would have too much clout. The responses, not surprisingly, were split sharply along partisan lines.

Harris’ biggest impact may come in the 50-50 Senate, where she will be able to cast tiebreaking votes.

The Democrats officially took control of the Senate on Wednesday afternoon, when Harris swore in three new Democratic members: former California Secretary of State Alex Padilla, who was appointed by Gov. Gavin Newsom to replace her; and the winners of two runoffs in Georgia this month, Jon Ossoff and the Rev. Raphael Warnock.

Harris presided over the chamber after that, fulfilling a ceremonial right to lead the Senate, though she will spend most of her time as vice president in the executive branch.

Wednesday night, Harris addressed the nation during a televised celebration concert, extolling the legacy of “American aspiration” and suggesting the country faces a new moment to chart its path.