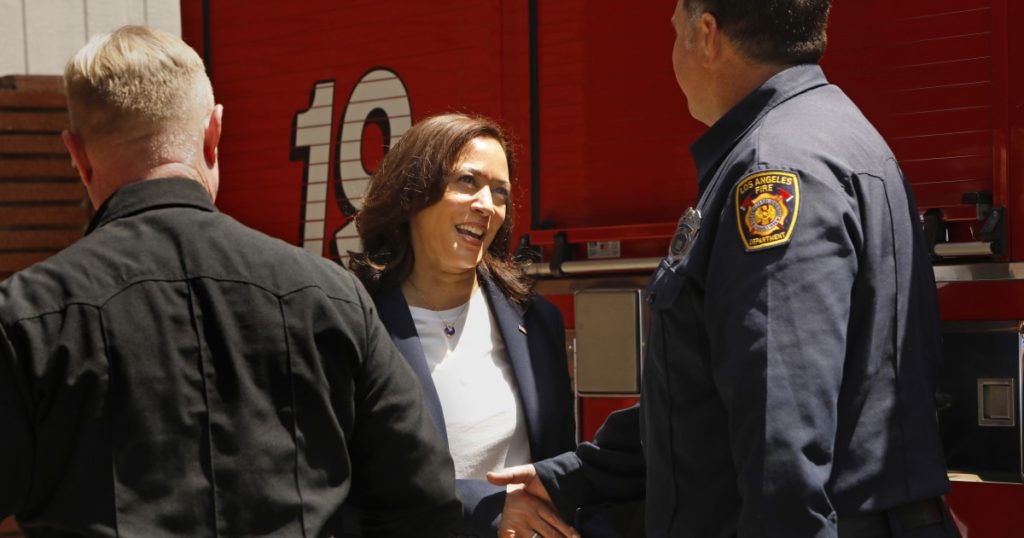 “Thank you so much for your work,” Harris said, noting that she had visited the site of the 2018 Paradise fire, the deadliest in state history, and this year’s fire season is expected to be worse than last year’s, which is the worst on record. “The courage you show is extraordinary, just extraordinary. You save lives, and you do it so selflessly.”

Firefighters were among the critical workers who could not stay home during the pandemic, Harris said.

“… Take care of yourself,” she said, adding that on the Fourth of July, “it’s important to remember … the nature of who we are.”

Harris’ 13-minute stop at Los Angeles Fire Department Station 19 took place as three large fires are burning in Northern California, with the Salt fire in Shasta County destroying more than two dozen homes and at least 14 outbuildings as of Saturday.

The firefighters at the station are well versed in battling wildfires; last year they were among the responders to the Getty fire that forced thousands to evacuate.

On Wednesday, President Biden announced that his administration would increase federal pay to at least $15 per hour for such front-line firefighters, a recognition of the growing severity of fire season, notably on the West Coast.

Harris and her husband, Second Gentleman Doug Emhoff, said that they have had to evacuate from their nearby home before because of encroaching wildfires.

“On behalf of the neighborhood and on behalf of us, thank you for all you do,” Emhoff said, adding that his brother is a firefighter.

The couple brought along a box of cookies from Deluscious Cookies & Milk, a local women-owned small business, and were accompanied by Rep. Ted Lieu (D-Torrance) and his wife, Betty. The elected officials and their spouses took pictures with the firefighters in front of a red fire truck; the eight men saluted as Harris’ motorcade departed.

This weekend marked Harris’ fifth visit to California since she became vice president. On Saturday, she spoke about the administration’s infrastructure proposal in Las Vegas before landing in Los Angeles in the afternoon.