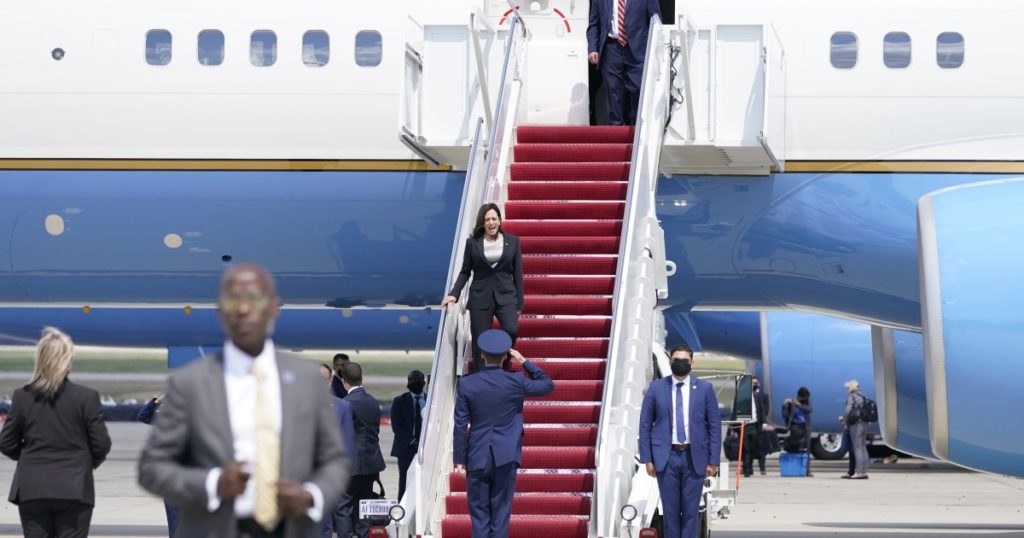 Vice President Kamala Harris is to meet with Guatemalan President Alejandro Giammattei on Monday, opening a two-day visit here and in Mexico aimed ultimately at reducing the poverty, violence and corruption that has helped prompt thousands of migrants from Central America to head to the United States.

Harris landed is Guatemala City on Sunday evening, to a red-carpet reception and greeted by a national honor guard under a slight breeze. It was her first trip outside the United States since taking office, and one with historic significance. Harris is now the highest ranking woman of color in the history of the United States to represent the country on foreign soil.

She is doing so in her role as President Biden’s emissary to address the root causes of the regional migration northward. In addition to meeting Giammattei, Harris plans to hold a roundtable discussion with Guatemalan community leaders and a separate event with entrepreneurs, where she will see projects designed by young female engineers. She plans to fly to Mexico City on Monday evening.

Officials who spoke with reporters on Air Force Two, the vice president’s plane, said the administration would announce actions against smuggling and human trafficking on Monday and hoped to unveil additional anti-corruption measures. One official said there are no plans to provide additional aid on the trip beyond the $310 million in previously announced aid.

Administration officials have tried to lower expectations about any immediate results, stressing that Harris’ trip is an introduction to the region.

But Harris is under political pressure to show results. Republicans have tried to tie her to the administration’s struggles to manage the border and have attacked her for not acting more aggressively in her assignment. And the continued flow of migrant families and unaccompanied children to the U.S. border has created an urgent humanitarian problem.

Ricardo Zuniga, the administration’s special envoy to the region, defended the decision for Harris to meet with Giammattei, despite attacks here on independent bodies trying to root out corruption in the government.

Zuniga told reporters Sunday night that Harris and Giammattei would talk “clearly and plainly as partners, as countries that have to get along.”

In previous conversations with leaders in the region, Zuniga said, “We talked about the easy things, but we talk mostly about hard things.”

Specialists on the region expect Harris will save her tougher remarks for private conversations.

“This is a trip to Mexico and Guatemala, but it’s a trip that’s being viewed across the broader region as … an indication of what is going to be the Biden administration’s broader strategy,” said Jason Marczak, director of the Adrienne Arsht Latin America Center at the Atlantic Council think tank, which held a discussion on the trip Friday.

On Tuesday in Mexico City, Harris will meet with Mexican President Andrés Manuel López Obrador, who is perhaps distracted by assessing the results in Sunday’s regional elections throughout his country. His party kept its majority in the Mexican Congress, but lost the two-thirds supermajority that would have allowed López Obrador to make sweeping constitutional changes.

Harris’ trip got off to a rough start as she left Washington on Sunday afternoon. Her plane was turned back after takeoff because of mechanical problems, forcing her and those traveling with her to switch aircrafts.

“We all said a little prayer but we’re good,” Harris told reporters as she walked off the troubled plane.

Biden asked Harris in March to tackle what the administration calls the “root causes” that has led to an increased number of people from Guatemala, Honduras and El Salvador, including many families and unaccompanied children, to head toward the United States.

The three countries, known collectively as the Northern Triangle, have been rocked by recent hurricanes and the COVID-19 pandemic. But they also have deeply embedded poverty and corruption that have allowed drug cartels and other criminals to thrive. Harris is not traveling to Honduras or El Salvador and has not met with either country’s leaders because of American concerns about corruption in both countries.

Harris has spent months meeting with experts, activists and business leaders, often virtually, and has begun implementing a strategy that includes soliciting foreign investment as well as granting foreign aid, while exerting pressure on the governments to improve their governance and human rights records.

Corruption is “kind of a driver of migration” because “when the governments are not reliable, they can’t deliver services,” said Steve Johnson, a top advisor on the region in the George W. Bush administration.

“We should all be clear that one visit will not solve it all,” Mendez, who is based in Guatemala City, said in an interview.

Harris has also emphasized the need for patience. Many of the problems have been festering for decades. Biden had a nearly identical assignment in 2014 when he served as vice president in the Obama administration but was unable to make a long-term impact.