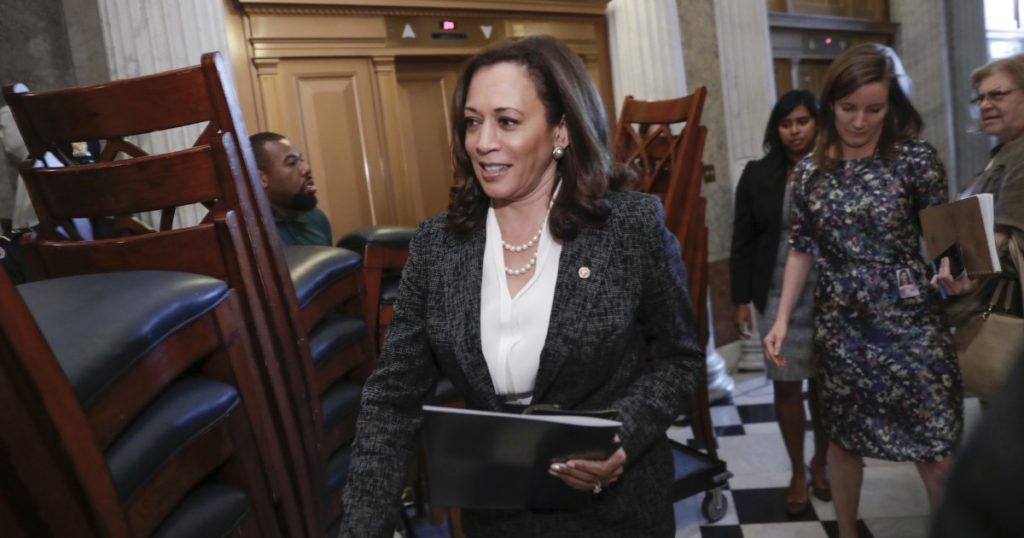 A pair of Democratic wins in the Georgia Senate runoff elections this week put a finer point on Vice President-elect Kamala Harris’ constitutional role as president of the chamber, empowered to break ties.

The victories by the Rev. Raphael Warnock and Jon Ossoff in Tuesday’s high-stakes races create a 50-50 split between Democrats and Republicans, including two independent senators who caucus with Democrats.

The rare circumstance sets Harris up for a starring role on Capitol Hill — presiding at the Senate dais to deliver for the administration the final “yes” vote on key bills, Cabinet confirmations and judgeships.

“It will be a pretty dramatic moment anytime she has to come up to the Hill to break a tie, with every move monitored and put on the cable news and put on the Twitterverse,” said Jim Manley, a former Democratic leadership aide.

At the same time, Harris’ advisors are hoping the Senate duties don’t distract from her other responsibilities and priorities too much, hindering travel, dominating her schedule or interfering with her ability to become an active player in the Biden White House.

To that end, although Harris will have a pair of offices in the Senate, like all vice presidents, don’t expect her to be hanging out there all day, supervising debate or trolling committee meetings. And expect the administration to work with Republicans to avoid 50-50 ties whenever possible.

“When there is a need to be up there to be a tiebreaking vote, of course she will be there. But the administration wants to work with the Senate” to avoid ties, said one of her advisors, speaking on the condition of anonymity.

Much of that strategy is pragmatic. Currently, most bills in the Senate require a 60-person majority because of the filibuster rule. Though many Democrats are pushing to change the long-standing rule as it applies to legislation, it’s unclear when or if they will have the votes to do so. Filibusters have already been removed for Cabinet and judicial confirmations.

But as long as legislation still requires 60 votes, Harris’ tiebreaking powers won’t be as critical since Democrats will need to win the support of at least 10 Republicans.

The real power brokers in the Senate will be incoming Senate Majority Leader Charles E. Schumer, the New York Democrat, soon-to-be Senate Minority Leader Mitch McConnell, the Kentucky Republican, and a handful of moderate senators such as Joe Manchin, a West Virginia Democrat, and Susan Collins, a Maine Republican, who can work to build coalitions with the other side.

Rather than having Harris cooling her heels while waiting for Senate votes, her advisors say it is vital that she be seen as an active participant in shaping policy. They want her to spend more time in the White House with Biden, helping on big decisions to end the coronavirus epidemic and reboot the economy.

Since Harris is the highest-ranking woman and person of color in the Biden administration as well as the presumptive next Democratic presidential nominee, it’s a priority among Black voters — a key constituency of the Democratic Party — that she wield real power.

“Black people have won this election for Democrats,” said Arisha Hatch, vice president and chief of campaigns for Color of Change, a political group that advocates for African American representation. “In order for Democrats to continue to win in this way, it means this administration needs to deliver real results that Black people feel in their lives.”

The Senate gig could get tricky at times. Harris has been hoping for a busy travel schedule. But some trips abroad may need to be clipped or canceled if she is needed back home to cast a vote or two.

Senate splits like this are unusual. The last 50-50 Senate was two decades ago, when George W. Bush first took office, putting Vice President Dick Cheney in the tiebreaking role. It lasted less than six months because Vermont Sen. Jim Jeffords renounced the Republican Party and became an independent who caucused with Democrats, giving them control.

A century ago, it was more common for vice presidents to spend their time exercising their duties as president of the Senate. But that was largely because “they didn’t have anything else to do,” said Joel K. Goldstein, the author of “The White House Vice Presidency: The Path to Significance, Mondale to Biden.”

That began to change in the 20th century as the presidency became more powerful and complicated — in the face of the Great Depression and a pair of world wars. By the time Richard Nixon served as Dwight D. Eisenhower’s No. 2, leading the Senate was no longer part of the day-to-day routine.