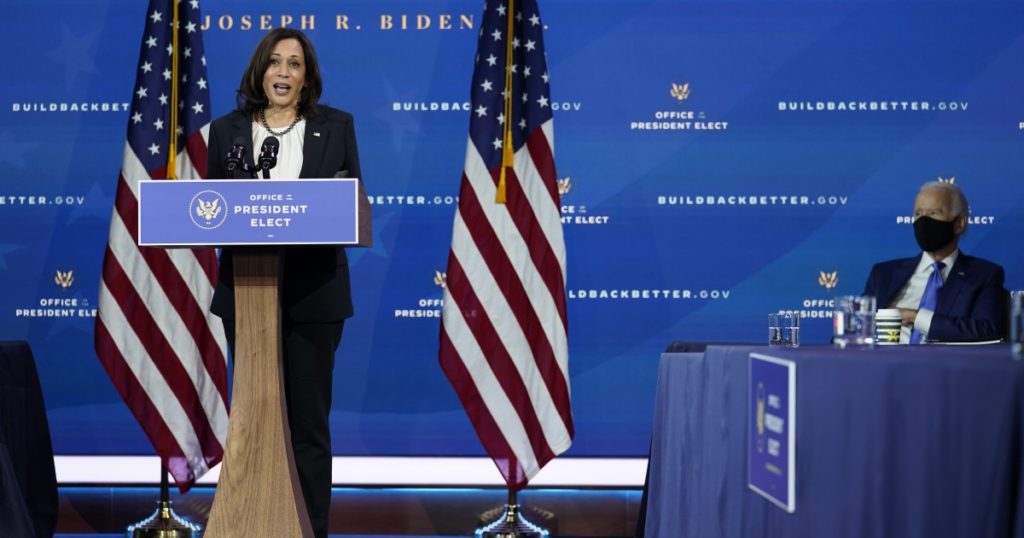 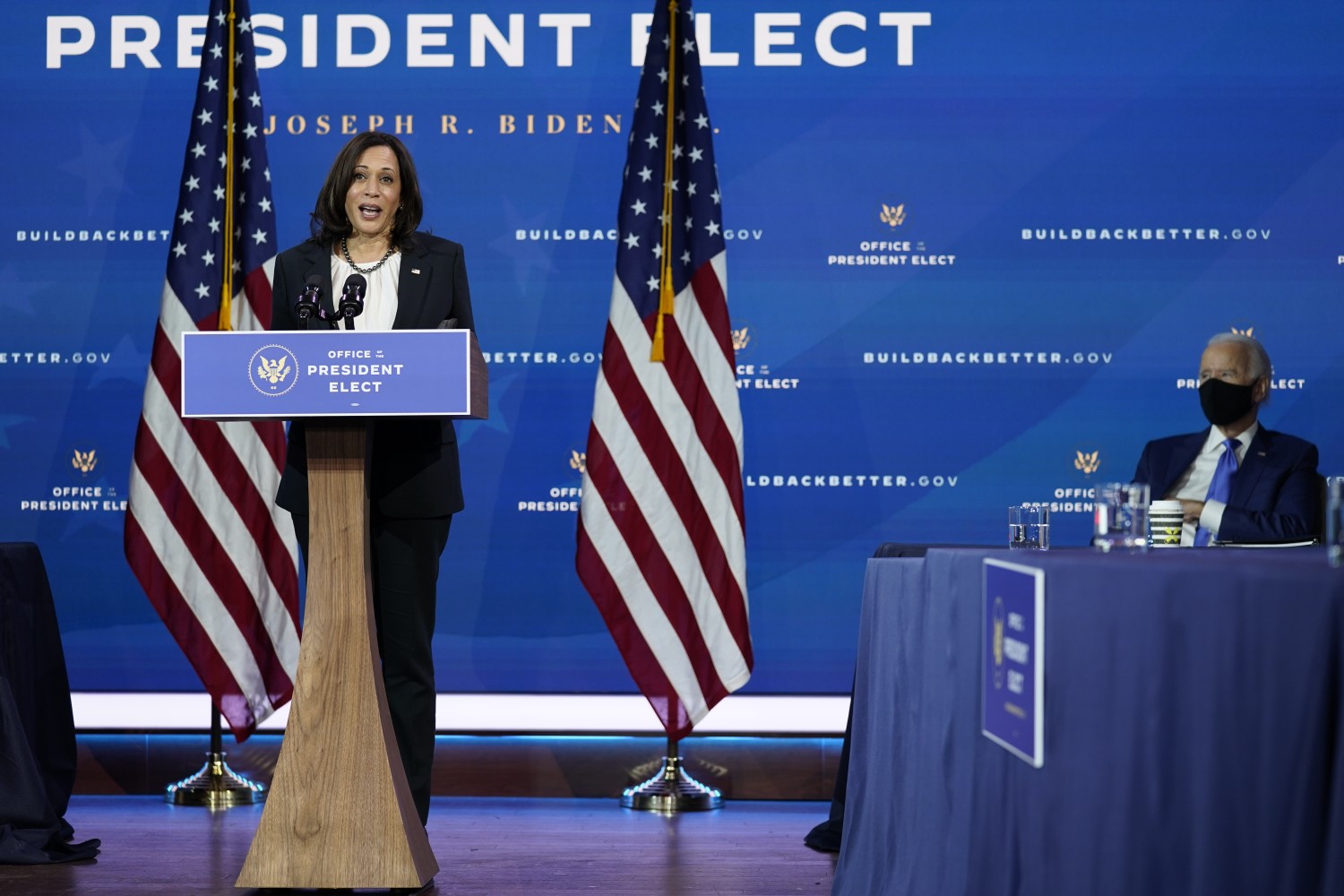 Kamala Harris began her political career in 2003 with an audacious gambit, running against and unseating her former boss, San Francisco Dist. Atty. Terence Hallinan, just a few years after he’d promoted her to be a top assistant.

Now that long-apparent ambition will be the source of inevitable speculation as Harris is about to become the vice president, the understudy, to a man who at 78 will be the oldest president in history.

President-elect Joe Biden, while eager to dispel any notion that he’ll be a lame duck, has insisted repeatedly that Harris need not wait for power. As a former vice president who believes in a robust role for the job, he has already begun sharing the stage and the decision-making with the 56-year-old California senator.

He gave Harris a prominent speaking slot at his victory address in Wilmington, Del., last month and has continued to do so at almost every appearance together since.

“Whatever the most urgent need is that I’m not able to attend to, I have confidence in … turning to her,” Biden said in a joint CNN interview with Harris on Thursday. “There’s not a single decision I have made yet about personnel or about how to proceed that I haven’t discussed it with Kamala first.”

Yet all that opportunity carries risk for Harris. Appear too ambitious or gain too much attention, and Biden’s inner circle begins worrying about her political motives, and knives come out among other Democrats who covet the White House. Step off message and she could get frozen out.

Women are often unfairly scrutinized for seeking power, and more often than men are called ambitious in a negative way.

Yet Harris is keenly aware that the challenge of seeming to be a team player would exist for anyone serving beside a president widely viewed as a transitional figure, according to interviews with current and former advisors, historians, former government officials and advocates.

“There’s going to be plenty of people in the White House that are going to be highly circumspect about anything Kamala Harris does or says for the same reason they were concerned about her being picked as vice president — that she’s going to be out for herself,” said a former official who has worked for her and requested anonymity to avoid alienating her or Biden.

The person pointed to Harris’ performance on the campaign trail, when she stuck closely to a script praising Biden and his policies, as the model for her behavior going forward.

“She will have his back in every dark alley,” the person predicted.

Harris demonstrated that in the CNN interview. She deferred frequently to Biden as they sat socially distanced on the stage, and smiled awkwardly when host Jake Tapper asked what her policy portfolio would be and whether, like Vice President Mike Pence, she would have weekly lunches with the president and run his COVID-19 task force.

“If the future is determined in any way based on what has been happening, we are full partners in this process,” she said. “And I will tell you that the president-elect has been — since the first day he asked me to join him on the ticket — been very clear with me that he wants me to be the first and the last in the room.”

Biden said he did not expect to assign Harris a discrete portfolio of specific initiatives or policy areas at the outset — the way, for example, that President Clinton gave Vice President Al Gore some responsibility for environmental issues and for a task force to streamline government — but would instead rely on her to be available to help with major crises. That roughly describes the arrangement he and President Obama had.

For Harris, that could include roles in the Biden administration’s response to the COVID-19 pandemic and the struggling economy, and in efforts to combat systemic racism and discrimination in policing as well. Harris will not only be the first woman of color to hold the second-highest national office, she is also a former district attorney and California attorney general.

Unlike Biden, who had decades of experience in the Senate and in foreign affairs even before his eight years as vice president, Harris is a first-term senator who has been on just two official trips abroad — to Israel, Jordan and Afghanistan.

But she has served on the Senate Intelligence Committee and has spent time in state and local government. And she has other life experiences — including being raised by parents who immigrated to the U.S. from India and Jamaica, and spending part of her youth in Montreal — that give her a different perspective than Biden’s.

Harris has lived in Washington during the transition, traveling to Wilmington for periodic joint appearances with Biden while staying in frequent communication as he considers personnel choices and gets briefed on pressing issues, according to an aide.

Biden faces pressure from throughout the Democratic Party to empower Harris in some form. Civil rights groups have publicly asked him to appoint more minorities and women to top positions, and have made clear that they expect Harris to govern as a full partner.

“The old term — ‘wait your turn’ — that doesn’t apply anymore. We’re not only qualified; we’re ready to assert our power and our vision,” said Aimee Allison, founder and president of She the People, a group that promotes women of color in politics. “She’s carrying the political hopes and dreams of women of color, who are the core of the Democratic voter base.”

But neither pressure nor Biden’s stated intentions guarantee some level of clout for Harris. And even allies say the full measure cannot be known ahead of time, but inevitably will flow from events that confront the administration and from the relationship she and Biden build.

“Four years ago, people were saying Pence was going to be the most powerful” vice president in history because President Trump had never served in the government or the military, said Joel K. Goldstein, the author of “The White House Vice Presidency: The Path to Significance, Mondale to Biden.”

Harris has a history of staff turnover and has little experience with some of the top advisors she has announced for her office. It’s a contrast with Biden, who has surrounded himself with close advisors who have known him for decades.

During her own presidential campaign, Harris initially stood out in the crowded Democratic primary field, only to see her campaign crumble amid staff tensions and bitter recriminations.

One of her biggest flaws was the perception that she lacked conviction on core issues that appealed to progressives in the Democratic base. That proved an asset when she began speaking on behalf of Biden’s more moderate platform.

“She’s always been somebody who’s hard to pigeonhole, which arguably sometimes works against her and sometimes works for her,” said Dan Newman, a San Francisco-based political consultant who worked on Harris’ campaigns for attorney general and Senate and for a super PAC that supported her presidential bid.

Though Trump attempted to caricature Harris during the campaign as a leftist who would dominate Biden and turn the country into a socialist republic, she is hardly viewed within the party as a movement progressive.

“There’s some healthy skepticism in terms of what she believes and what she will do, but I would love to be proved wrong,” said Rebecca Kirszner Katz, a former Senate leadership advisor who works on behalf of progressive candidates and groups.

A former Harris aide predicts the relationship with Biden will be tested as the demands of the presidency and the size of his staff grow. That could diminish Biden’s ability, if he’s so inclined, to run interference for Harris against sharp-elbowed Cabinet secretaries and other administration officials.

Although Biden “had enough bandwidth” to tamp down friction between Harris’ camp and his own staff during the campaign and transition, the former aide said, “your bandwidth shrinks” when you become president.