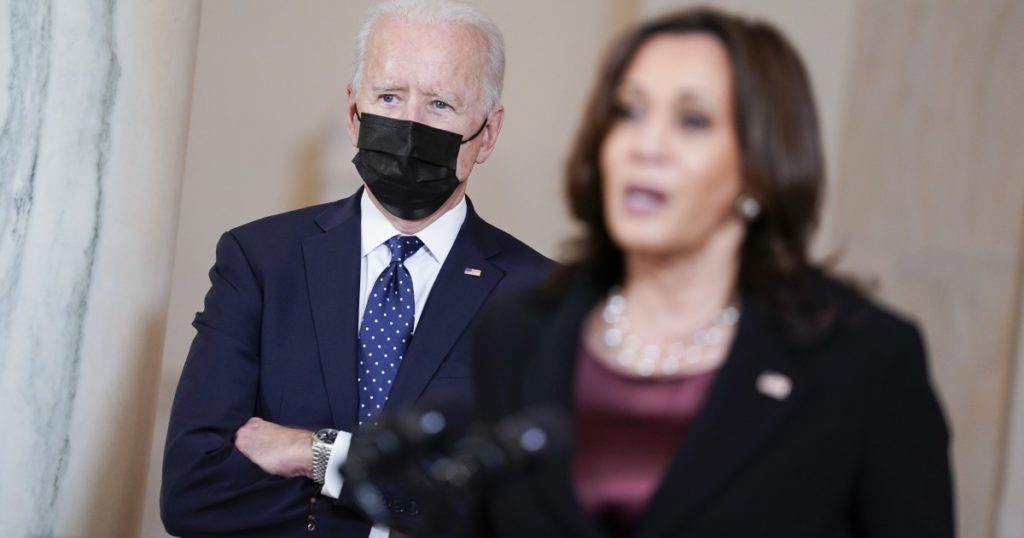 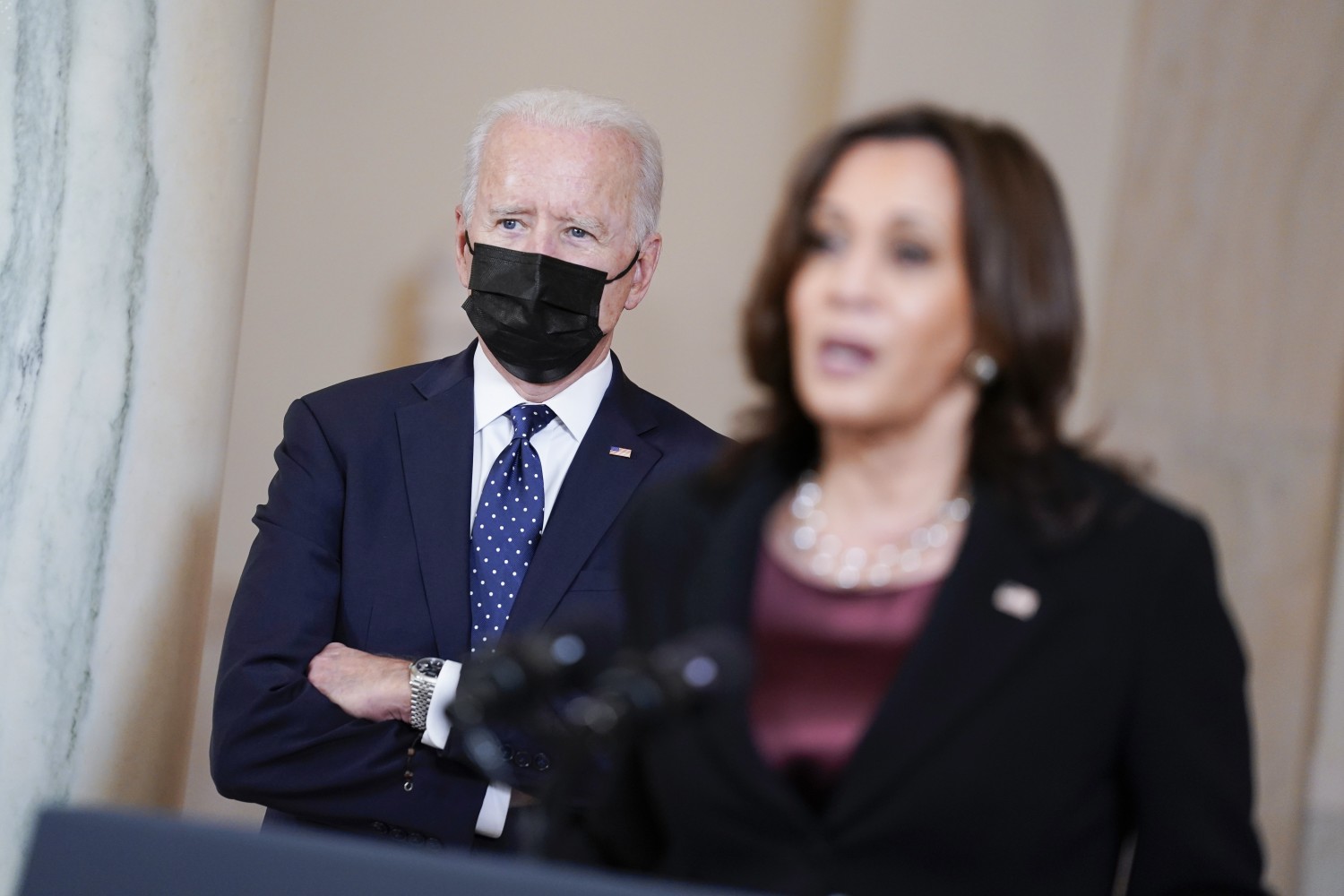 That moment following the Chauvin trial would have seemed improbable 20 months ago in the heat of a Democratic presidential primary debate: Then-candidate Harris lectured rival Biden on the nation’s racial history, accusing him of wounding young Black girls like her when he opposed busing in the 1970s to desegregate schools and hurting her personally when he boasted of working with segregationist senators long ago.

As she and Biden approach the 100-day mark of their administration Thursday, however, Harris has established herself as a highly visible partner — and, as the first woman of color in the role, a symbolically important one as the country confronts systemic racism. He’s featured her prominently, too, as part of the administration’s offensive against the COVID-19 crisis. And she’s traveled and met with key constituencies to sell the president’s agenda, broken tie votes in the Senate and stood by Biden’s side in public and private moments.

Her choreographed role has begun to dispel concerns that Harris’ desire for the top job could prompt her to undermine Biden or break from the administration’s disciplined public relations strategy.

But it also seems likely to keep Harris from stepping out or establishing an identity and a policy record that she can call her own.

“Her number one goal coming into this White House was to be a good partner,” said Bakari Sellers, a co-chair of Harris’ presidential campaign and a CNN political commentator who has remained a close ally.

He dismisses any talk that she’s positioning for a possible presidential run should Biden, 78, fail to run for a second term, or that her relationship with him is at all strained by their previous rivalry: “The largest misconception people have about her: People assume there is 2024, or maybe even some animus there going back to the [2020] debate.”

Sellers said Harris, whose presidential campaign was undone in part by a sense that she was overreacting to events and polling rather than sticking with long-term themes, has learned from Biden to block out the noise.

“That’s something that’s really good that’s rubbing off on the vice president,” he said.

Her advisors point to a number of items on Biden’s legislative agenda that Harris pushed behind the scenes, and say she shares credit for the administration’s successful delivery of more than 200 million COVID-19 vaccine shots and more than 100 million economic relief checks. But White House and Harris staffs say they have worked by committee, making it hard to point to specific provisions or measures that bear her singular imprint.

“The president sets the tone and the agenda and we are complementary to making sure that we’re bringing her unique lived experience,” said Rohini Kosoglu, Harris’ domestic policy advisor who previously served as her Senate chief of staff.

Harris has just one solo assignment — working with Mexico and three Central American nations to discourage immigration to the United States — a fraught task that she has yet to fully explain, and one that has put a political target on her back for Republicans eager to blame her for the border problems. Harris has no plans to visit the region until at least June. Progress is not only important for Harris’ political future but also for the safety and livelihoods of millions of people in the region.

The sense among some allies and opponents alike that Harris would be a shadow president, pulling the strings for Biden, was never realistic. Biden has quickly shown that he is much more ambitious and forceful than the transitional president some had predicted.

“She’s in the room literally and figuratively,” said Brian Brokaw, a political advisor to Harris from 2009-19. “Is she steering the ship? Probably not. But tell me a vice president besides Dick Cheney who was steering a ship. I think she committed to be a team player from the second she was offered a shot on the ticket.”

Advisors say Biden consulted Harris on two of his biggest early decisions — greatly enlarging the scale of the COVID-19 relief package to $1.9 trillion, and withdrawing troops from Afghanistan by Sept. 11. In both cases, they said, she agreed with Biden’s choices, which were hotly debated internally. Only the president knows how much Harris’ opinion mattered in the end.

“It is often the case that as I will ask his opinion about things, he will ask my opinion. And through that process, I think we arrive at a good place. Ultimately he is the president and he makes the final decision,” she told CNN last week.

Advisors say she fought hardest in discussions over the relief package to include money for front-line workers — pushing a tax credit for low-income workers who do not have children at home — and for a $110-billion child tax-credit plan that is projected to cut child poverty in half. Harris worked on that issue, a priority for antipoverty advocates, when she served in the Senate.

Harris also relied on her Senate experience and political career in California in pushing to include more money in Biden’s roughly $2.25-billion infrastructure and jobs plan for expanding the availability of broadband service and replacing lead water pipes.

Michael Pyle, Harris’ chief economic advisor, said that while both water and internet access were priorities for the president and the party on the infrastructure bill, Harris pressed for goals of 100% broadband coverage and lead-pipe replacement: “Those were ambitious commitments and commitments that the vice president felt very strongly needed to be at that kind of level of ambition, at that level of universality.”

Publicly, she has taken lead roles in encouraging Black people to get the COVID-19 vaccine, addressing systemic racism and sexism in the healthcare system and the economic and psychic toll that the pandemic has taken on women.

Unlike Biden, who spent decades in the Senate and had extensive experience in foreign affairs when he became vice president to Barack Obama, Harris is learning on the job. She is also competing for influence with longtime Biden colleagues and advisors, many of whom have long track records on foreign and domestic policy.

For example, John F. Kerry — the former senator, secretary of State and 2004 Democratic presidential nominee — is serving as an international climate ambassador, assuming some of the responsibilities that a vice president might otherwise get. Gene Sperling, a top economic advisor in the Clinton and Obama administrations, was chosen to oversee the $1.9-trillion pandemic-relief plan, a job similar to the one Biden had when he was vice president during the previous economic crisis.

A close Biden ally who worked with him in the Obama administration said Biden is well aware that vice presidents can feel like outsiders at times and is consciously trying to help Harris and her small group of advisors find a footing in his inner circle.

The president has made a point of meeting with Harris on a near-daily basis, both in groups and one-on-one, often for lunch — “to credentialize her, to really send a message that she matters,” said Joel Goldstein, a law professor at Saint Louis University who studies the vice presidency.

That will pay dividends for both of them, Goldstein predicted, giving Harris the stature at home and abroad to represent Biden with authority and expand her responsibilities, and helping Biden expand his reach.

“The most important thing isn’t in-depth knowledge,” said Brian Katulis, who worked in national security positions under President Clinton. “It’s the relationship and trust and confidence of the president, and being able to be perceived as speaking for the president.”