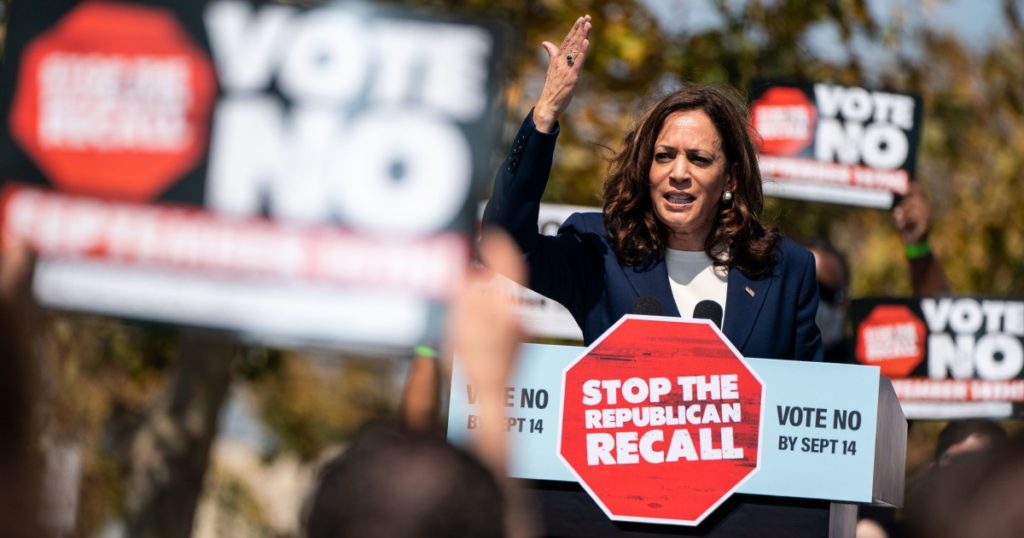 Gov. Gavin Newsom received a boost from a familiar face Wednesday when his longtime political ally Vice President Kamala Harris returned to the Bay Area to campaign for him against the GOP-led recall.

“This is why they are putting in so many resources and time to take out Gavin Newsom.”

Harris is the latest in a series of high-profile national Democrats to join Newsom as he launches a full court press against Larry Elder, anti-vaccination activists and Trump supporters on the campaign trail and in television ads in the final days before the Sept. 14 election.

Similar to appearances by U.S. Sens. Elizabeth Warren and Amy Klobuchar over Labor Day weekend and a recent anti-recall ad by Bernie Sanders, Harris’ visit to San Leandro was intended to turn out voters and show unity from all corners of the Democratic Party as Newsom fights for his political survival.

“There are very few better messengers than a Bay Area native, who has gone on to become vice president of the United States, campaigning in her home turf on his behalf,” said Brian Brokaw, a senior advisor to Newsom and a former political advisor to Harris.

Brokaw described Harris and Newsom as political siblings, whose careers overlapped in the bubble of San Francisco politics and followed parallel paths to power for the next 20 years.

Appointed to public posts by former Mayor Mayor of San Francisco and Assembly Speaker Willie Brown in the mid-’90s, Harris was the first woman to be elected San Francisco’s district attorney on the same 2003 ballot that made Newsom the city’s youngest mayor.

They leapt to statewide office together in 2011 when she became attorney general and he took on the role of lieutenant governor. Four years later, she announced her plan to run for former Sen. Barbara Boxer’s seat, and Newsom followed the next month with an early declaration of his intent to run for governor three years before the 2018 election.

Harris jumped to the national stage before Newsom, with a run for president in 2020 that ended with her positioned as Biden’s second in command. Her rise in Washington has raised questions about what it means for Newsom’s path beyond the governor’s office.

On Wednesday, she stood on a stage in San Leandro and offered a full-throated defense of her longtime friend.

“He has the courage and he’s had it his entire career to believe in and know what is possible,” Harris said. “An ability to see what can be, unburdened by what has been.”

Harris originally intended to campaign for Newsom nearly two weeks ago and postponed the trip after the deadly attack in Afghanistan that killed U.S. service members.

Sean Clegg, a senior political adviser to Newsom, said in the final days before the election that the campaign is seeking to “make sure that every living breathing Californian knows that this recall is happening” and understand the stakes through campaign rallies and a robust voter outreach plan that includes television ads, phone calls and door-to-door connections.

Harris’ visit and President Biden’s anticipated trip to rally for Newsom in California next week will put that message “on steroids,” Clegg said. Newsom’s campaign said it also plans to release an ad on Wednesday featuring former President Obama.

“A standalone appearance isn’t going to be decisive in this whole thing, but it does send the message that Democrats are unified from top to bottom unlike in 2003,” said Garry South, a senior political advisor to former Gov. Gray Davis.

Some Democrats had become disillusioned with Davis, South said, and Lt. Gov. Cruz Bustamante’s candidacy helped fuel a split within the party nearly two decades ago.

John Kerry and other Democratic presidential hopefuls stumped for Davis. But then-President George W. Bush and the Republican National Committee smartly kept clear of the race and made it difficult for Davis to frame the recall as a GOP power grab, South said.

This time around, Newsom and his political advisors have successfully sold the narrative that the recall election is motivated by Trump Republicans and radical right wing groups with the help of the national GOP.

Though Trump has stayed out of the campaign, the Republican National Committee donated to the pro-recall cause. Former U.S. House Speaker Newt Gingrich, former Arkansas Gov. Mike Huckabee, Trump’s personal lawyer Rudy Guiliani and Rep. Devin Nunes (R-Tulare, Calif.) have endorsed the recall or the backup candidates, giving the governor an opportunity to name check the controversial California figures as he rallies voters against the recall.

And the arrival of conservative talk radio host Larry Elder has given Newsom a clear contrast for Democrats and a reason to vote no.

In San Leandro, Newsom said Elder believes food stamps are a giveaway, wants to eliminate the corporate tax and end the minimum wage and would reverse the state’s progress on COVID-19.

Meanwhile, Elder marked his ballot in favor of the recall on Tuesday morning in a Los Angeles voting center that was near-empty, save for the long line of press cameras filming as he worked the machine. He was joined by his girlfriend Nina Perry.

“It’s a beautiful day to recall a governor,” Elder said, standing on a busy stretch of Melrose Avenue outside the voting center as several trucks rolled down their windows to cheer for the candidate.

In a sign that Newsom’s scare tactics and campaign blitz are working, a recent poll found that 58% of likely California voters oppose recalling Newsom, compared with 39% who support removing the governor. Early mail ballot returns show that twice as many Democrats have voted compared with Republicans.

“He doesn’t have a Schwarzenegger,” South said. “He doesn’t have a Cruz Bustamante. He has a friendly White House, a president and vice president, who have come out against the recall. If we call 2003 a perfect storm, this is the reverse of that — a harmonic convergence of the planets.”