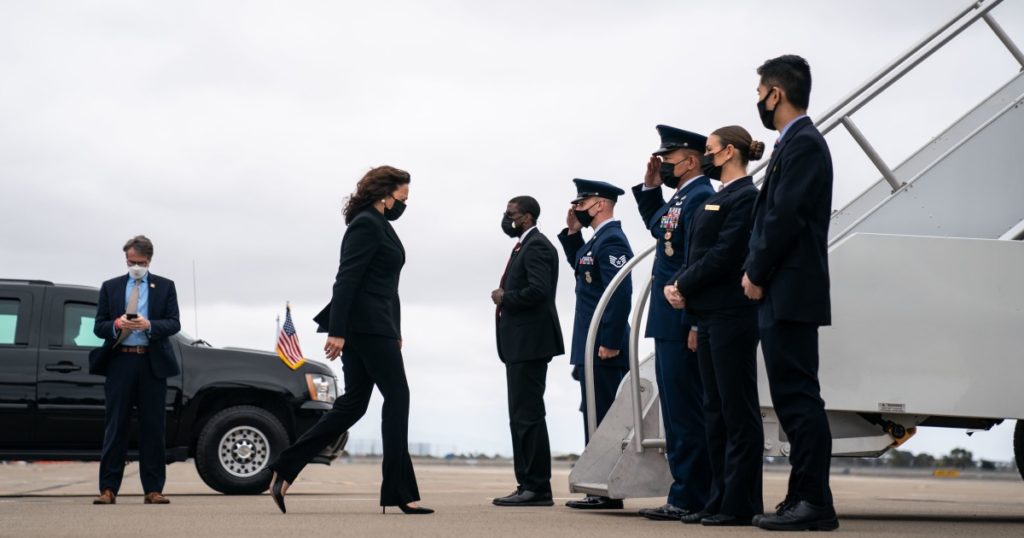 With the Biden administration crossing the arbitrary but still meaningful threshold of 100 days in office, there’s no question that President Biden has been successful.

Recent polls show that a surprisingly high percentage of Americans — roughly 53% — approve of his job performance so far, with the highest marks coming for his handling of the COVID-19 pandemic and the economy. He even has a 63% favorability rating among college students who are registered to vote.

Not bad for a 78-year-old grandfather who was once dismissed as out of touch by Americans on both sides of the political aisle.

However, I’m convinced that much of Biden’s success never would have happened without Vice President Kamala Harris by his side. As a child of immigrants, as well as the first woman, first Black person and first South Asian person to hold the job, the California Democrat has turned out to be the right politician, in the right position, at the right tumultuous time in America’s history.

At a time when the nation is being pulled apart by racists and rocked by racial injustice, Harris, just because of who she is, has been able to connect with Americans in a personal and powerful way. I don’t envy her.

After a jury convicted former Minneapolis police officer Derek Chauvin in the murder of George Floyd, for example, Harris was able to understand and then convey the pain of Black people when she said: “Black Americans and Black men in particular have been treated throughout the course of our history as less than human.”

And after the spa shootings in suburban Atlanta, in which six women of Asian descent were killed, she was able to deliver a speech that got right to the unvarnished point. “Racism is real in America, and it has always been,” she said. “Xenophobia is real in America and always has been. Sexism, too.”

It’s no wonder then that a CNN poll found that 53% of Americans approve of the way Harris is doing her job — the same percentage as Biden. And fewer Americans disapprove of her — 37% — than they do of Biden — 43%.

But this layered identity of hers also has made Harris, however unfairly, susceptible to extra scrutiny and outsized expectations.

I was reminded of this earlier this month, when for the first time since becoming vice president, Harris paid a visit to her hometown of Oakland. She had limited time and, though it wasn’t long after the shootings in suburban Atlanta, she decided one of her few stops would be Red Door Catering, a small, Black-owned business that nearly closed for good because of the COVID-19 pandemic.

“We didn’t have the technical support as other larger companies,” owner Reign Free explained to Harris at the time, as captured by TV news crews.

Meanwhile, a few miles away, Carl Chan was sitting at his slightly messy desk, nailing down the final details of a fundraising campaign he was launching as president of Oakland’s Chinatown Chamber of Commerce. Across the country, he told me repeatedly that day, businesses owned by Asian Americans and Pacific Islanders were suffering.

“If there is one wish that I have for our VP Harris,” he said,” I would like to have her to join us at the press conference or a statement to support the AAPI business campaign.”

In coming months, I imagine Harris will find herself fielding even more such requests from people in the Asian American and Pacific Islander community.

A confluence of horrific, high-profile events — the spa shootings in suburban Atlanta, the vicious beatings of Asian American elders and the general rise in anti-Asian hate over COVID-19 — have elevated the needs of Asian Americans to national importance.

There’s an urgency, a pressure to get things done, just as there’s an urgency to address the needs of Black Americans that was accelerated with the killing of George Floyd in Minneapolis.

“I really think the vice president has an amazing opportunity to really lift up and communicate the sort of depth of the things that are happening in the community right now,” said Timmy Lu, executive director of Asian American Pacific Islanders for Civic Empowerment.

In the Black community, talk of what she and President Biden owe us — the Black voters who put them in office — is pretty common. It’s far more extreme and explicit than the demands on Harris from the Asian American community.

In February, for example, progressive activists with the Black to the Future Action Fund issued a “mandate for the Biden-Harris administration,” which includes everything from providing a guaranteed income to banning police in schools.

I suspect the entitlement to make such demands has to do with the public perception of Harris as being more open about her identity as a Black woman than as a South Asian. She was raised by her mother, who was Indian, but attended historically Black Howard University and joined the historically Black sorority Alpha Kappa Alpha, for which she still wears her signature pearls.

Lu, a longtime political organizer in the Bay Area, said that began to change during Harris’ brief run for president, when she began to talk more about her mother. “I think folks have taken quite a bit of pride in her work,” he said.

For these reasons, several Asian American activists and advocates told me they are looking to her now.

Hyepin Im, president of Faith and Community Empowerment in Los Angeles, got a glimpse what’s possible when during a recent Zoom meeting with Biden administration officials this month to launch the COVID-19 Community Corps grassroots network for vaccine advocacy. She pressed Harris to work harder to include Asian Americans in efforts to respond to the pandemic.

Harris, in response, said it was important “that we speak truth and address racial inequities across the board.”

But others want far more than platitudes from Harris, especially on immigration as the daughter of immigrants. Perhaps complicating matters, Biden has made her the point person for the crisis on the southern border, as thousands of Central American migrants head north.

Angela Chan, a policy director and senior staff attorney with Asian Americans Advancing Justice, points out that Harris has an uneven record when it comes to immigration. That includes policies that have allowed Southeast Asian refugees who arrived in the United States after fleeing U.S.-funded wars to be deported after completing prison sentences.

“With the power she has as the vice president of the United States,” Chan said, “I think there’s so much she can do for the AAPI community, including addressing these ICE detentions and deportations that are tearing apart refugee communities.”

She has hope. As a young attorney, Chan said she worked with Harris, then the district attorney in San Francisco, on a community task force to address anti-Asian violence. At the time, Lu said, there was a high degree of conflict and challenge between Black and Asian American communities.

It’s a reminder that what is happening now, with vicious attacks captured on grainy videos, is nothing new. It also should serve as a reminder that strategies Harris might have made then, with more law enforcement, weren’t actually solutions.

Meanwhile, the Senate has passed a bill that would, among other things, allow more aggressive enforcement of hate crimes, particularly those against Asian Americans. That bill now heads to the House, where it’s likely to pass, before landing on Biden’s desk.

The pressure — from both Black and Asian Americans — is on.