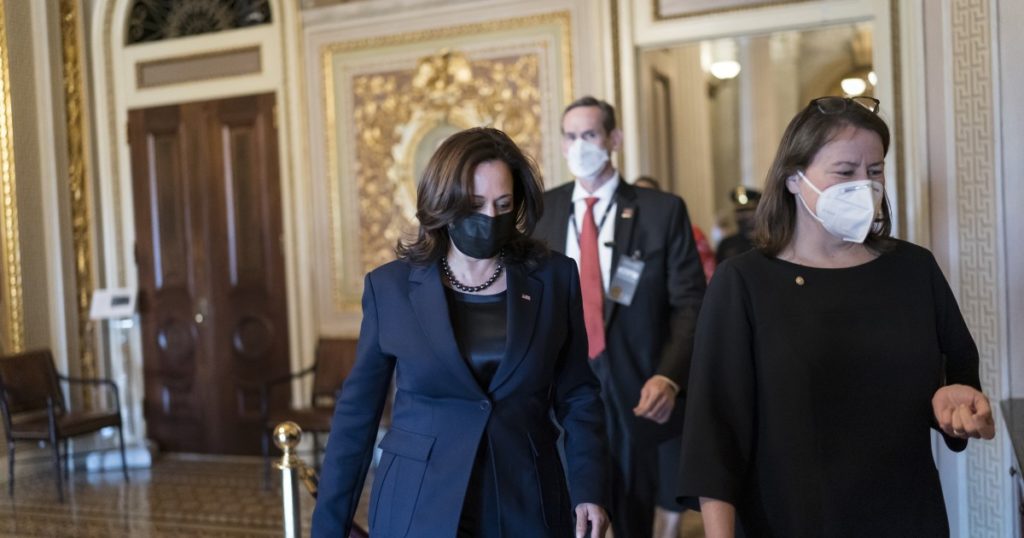 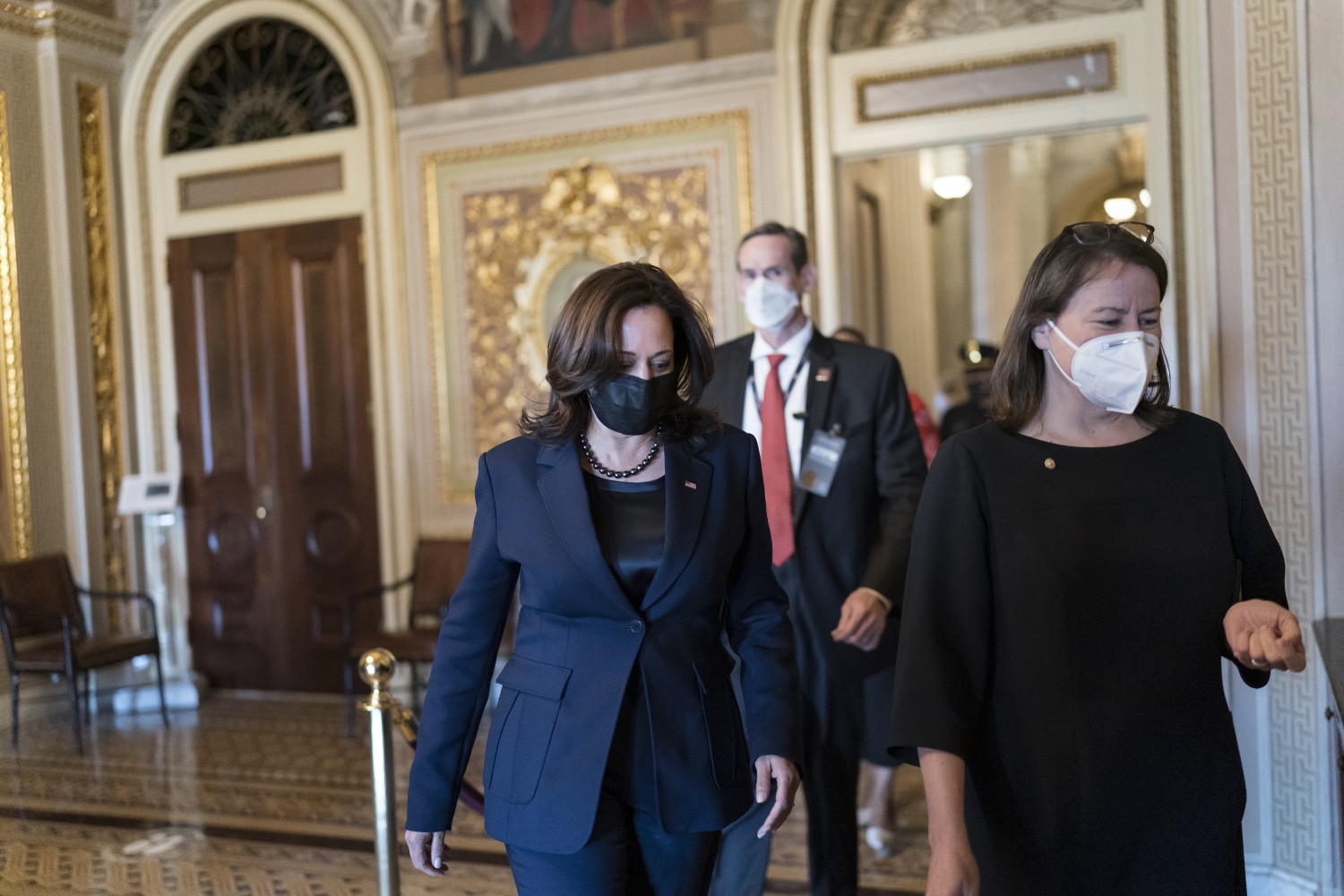 “She’s going to make history one way or another,” he said, for either standing alongside Rosa Parks, Ella Baker and Fannie Lou Hamer or letting down millions of poor people who depended on her campaign promise to guarantee $15 an hour for workers.

Harris’ defenders note that the minimum wage hike, though unlikely to be included in the Biden administration’s final $1.9-trillion COVID-19 relief plan, is a fight that is only in its first round. And they point out that Harris was hardly the only person deciding what path the administration would take as it seeks to push a relief bill through the Senate that is loaded with liberal priorities, including money for schools and direct checks for many Americans.

Still, Harris’ profile and constitutional role have made her a somewhat unlikely focal point in the Biden administration’s first big tussle with progressives — a largely tactical debate that will have echoes throughout President Biden’s four-year term, as his administration struggles to tackle a host of priorities with a scant majority in Congress.

The anger from the party’s liberal base at what they see as caving shows how difficult it will be for Harris to avoid entanglement in the most divisive intraparty scraps, given that she is the potential tiebreaking vote in a 50-50 Senate and someone many Democrats see as the front-runner for the 2024 presidential nomination.

“Harris is in a really unique position,” Lily Gardner, a spokesperson for the Sunrise Movement, a youth-based political group pushing action on climate and economic policy. “The reality is that she and the whole Biden administration are going to be faced with these really tough decisions, and I hope that they begin to chart a very different course.”

The case for turning Harris into the subject of letter-writing campaigns, Twitter hashtags, livestream protests and Sunday sermons requires some legislative creativity and moxie.

The theory goes that Harris, who under the Constitution presides over the Senate, should use that power to override a ruling that the wage increase could not be included in the relief package. The chamber parliamentarian said last week it wasn’t allowed under the reconciliation process being used to pass the bill in the Senate.

If it is voted on as separate bill, the wage hike would require 60 votes to pass, instead of 51, under Senate rules — meaning it would need support from at least 10 Republicans, an unlikely possibility in its current form.

To make the override plan work, activists would also need to win over moderate Democratic Sens. Joe Manchin III of West Virginia and Kyrsten Sinema of Arizona. Proponents of the wage hike believe the senators, if pushed to the wall, would acquiesce, despite their public opposition to a $15 national minimum wage as part of the relief bill.

But Harris is unlikely to take that kind of action without buy-in from Biden, who spent 36 years in the Senate and regards its traditions with reverence. He has ruled it out, and Harris, whose office declined to comment, has deferred to the president.

“It’s an illusion,” said Bob Shrum, whose long career advising leading Democrats includes a stint advising the late Sen. Edward M. Kennedy of Massachusetts. “You’re not going to raise the minimum wage by stomping your tweets, and she’s not going to do something the president doesn’t want her to do.”

Biden and other Democrats worry that a contentious fight that squeezes fellow Democrats could risk losing votes on the relief bill, a signature priority, and create longer-term damage to Biden’s promise to restore rules and a cooperative atmosphere. With no votes to spare, they worry about alienating moderate Democrats who will hold leverage on future bills.

And they believe they can broker a compromise on a lower increase to the minimum wage, which has been $7.25 since 2009. (Many states, including California, set a higher rate than the federal minimum.)

Byron Dorgan, a former Democratic senator from North Dakota who served two decades with Biden, said breaking Senate rules would be seen as “arrogant behavior” by the American people.

“I really don’t see Kamala Harris as playing a role that is somehow outside of the White House or outside the judgment of the Democratic caucus in the Senate,” he said.

Those pushing Harris to override the parliamentarian say they have already compromised enough and believe this is the best chance to approve the wage increase, which has already passed the House and is a core element of the progressive agenda that has majority support in polls.

They also see it as a leading indicator for how hard Democrats intend to fight for other priorities, including a voting rights package that passed the House on Wednesday. There is growing pressure to eliminate the Senate filibuster, which would make Harris the tiebreaker on a host of issues and eliminate the need to compromise with Republicans.

“This moment for a $15 wage is a defining moment for economic justice, for racial justice and for the Democratic Party, and there’s an incredible opportunity for Vice President Harris to recognize that moment,” said Rep. Ro Khanna (D-Fremont), who was national co-chair of Sen. Bernie Sanders’ (I-Vt.) campaign for the Democratic presidential nomination in 2020.

Harris, when she ran in the presidential primary, spoke at rallies with low-wage workers and supported the $15 minimum wage when she became part of Biden’s ticket.

“Let’s, one, bust the myth and make it clear families are relying on these salaries, and they must be paid $15 an hour,” Harris said as she joined striking McDonald’s workers in Des Moines in 2019.

She reiterated the promise at other venues, including to Barber, who co-chairs the Poor People’s Campaign: A National Call for Moral Revival.

“We have it on tape,” he said. “Her and Biden and the entire Democratic Party, their platform says they want to eradicate poverty. Her and Biden ran on 15 — never said ’15 unless the parliamentarian advises not to.’”

In Harris’ presidential run, she disappointed liberals when she backtracked on her support for “Medicare for all,” a Sanders plan to provide universal public healthcare. That has led to skepticism on the left, but also a pragmatic hope that she will see the political benefit to winning progressives back in what some see as a four-year audition for the top job.

They want her to use her clout — even if Biden is the ultimate decider — to sway him on this and other issues.

“Will she go rogue on the administration?” said Joseph Geevarghese, the executive director of Our Revolution, a group founded by Sanders. “I don’t think she will, obviously, but we’re signaling that we expect her to step up and lead, and hopefully that will embolden her.

“Let’s be real. The progressive base is energetic,” he added. “I think her role will determine whether or not progressives would consider her as a potential presidential candidate. That’s what it comes down to.”