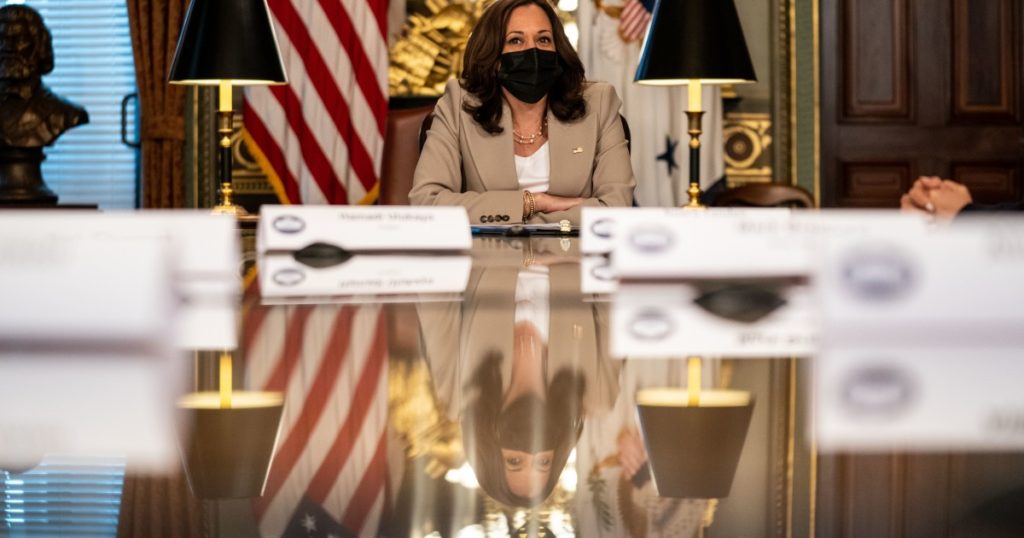 Vice President Harris has been, at least visually, front and center as President Biden has overseen America’s retreat from Afghanistan. She attends most of his security briefings and had to leave a meeting with business leaders Thursday afternoon to attend an urgent intelligence session as the Taliban rapidly cemented control over the country.

When the White House released a photo Sunday of Biden sitting alone at a telebriefing from the situation room in Camp David, Harris was on the other end of the screen, occupying the center square among Biden’s coterie of virtual advisors. She watched his high-profile speech Monday from a nearby room at the White House, a detail officials made sure to highlight in a continuing effort to brand the “Biden-Harris administration” as an unusually close team.

The harrowing images of the United States’ retreat from Kabul this week, with desperate Afghans futilely chasing a packed Air Force plane, is likely to be a defining moment in Biden’s presidency. But the execution of the withdrawal will also be added to Harris’ resume, underscoring the complex challenge she faces as Biden’s understudy during what is arguably the first crisis of his presidency.

Harris, who ran aggressively against Biden for the Democratic Party’s 2020 nomination, has been eager as vice president to be seen as loyal, while at the same time sharing in the administration’s successes to pave the way for another potential run at the top job.

She boasted on CNN, shortly after the president ordered troops withdrawn in April, that she was the last one in the room before Biden made his decision, and felt comfortable with the plan.

“The decision always rests with him,” she added, “but I have seen him over and over again make decisions based exactly on what he believes is right.”

The desire to erase any daylight between her and Biden poses two challenges: Her exact role in many of the administration’s accomplishments, such as the passage of the $1-trillion infrastructure bill in the Senate this month, is often hard to define, and it may be difficult for her to separate herself from decisions that go awry.

“The president’s legacy always falls heavily on the vice president,” said Elaine Kamarck, a former advisor to Vice President Al Gore who is now a fellow at the Brookings Institution think tank and has studied the role of the vice president. “Hubert Humphrey could not get out from the Vietnam War. Al Gore could not get out from under something that was even less his fault — an affair and an impeachment” of President Clinton.

The president’s legacy always falls heavily on the vice president. Hubert Humphrey could not get out from the the Vietnam War. Al Gore could not get under something that was even less his fault, an affair and an impeachment.

Even as she has been a team player and will share responsibility, it is unclear how much actual influence Harris has wielded with Biden, who has spent decades engaged in foreign policy debates and is surrounded by a small cadre of loyalists.

When Biden returned to Camp David after Monday’s speech, in which he sought to accept responsibility for the withdrawal but not the chaotic exit, he was accompanied by Steve Ricchetti, one of a handful of confidants the president is known to lean on most heavily as a sounding board.

Harris, who declined an interview request, will leave later this week for her second foreign trip as vice president — to Singapore and Vietnam. Her first trip, to Guatemala and Mexico, was marred by an interview with NBC News in which she gave a flip answer about her reluctance to travel to the U.S.-Mexico border to address the migration increase. Advisors said she will remain engaged in the Afghanistan response while in Southeast Asia.

Unlike Biden, Harris does not have a long or deep history with Afghanistan, although as a member of the Senate Intelligence Committee from 2017 to 2021 she would have had access to classified information about the country unavailable to Biden, then a private citizen. As a senator, she spoke infrequently about the conflict and traveled to the country just once, at the end of 2018, while she was preparing to run for president.

She did not mention the issue in her 2019 memoir, nor include it in her presidential campaign stump speech.

The vice president has expressed a general skepticism of lengthy foreign engagements that may have been inculcated when, as a girl in Berkeley, she saw her mother march in anti-Vietnam War protests. A former aide said Harris was struck during her trip to Afghanistan by the number of military personnel she met on their fourth or fifth tours who recounted long periods away from their families.

An advisor who would not agree to be quoted by name pointed to Biden’s statement Monday that the buck stops with him but also said Harris is “100% all in.”

“She hasn’t shied away from this,” the advisor added.

Neither Harris nor administration officials would say what, if any, questions, concerns or reservations Harris raised about the withdrawal plans or the fate of thousands of Afghans who aided U.S. forces. It is also unknown whether she expressed any skepticism about intelligence assessments that a Taliban victory was more than a year away.

Even though the speed of the Taliban’s takeover caught them by surprise, White House officials have generally defended the administration’s planning, insisting in interviews Tuesday that they were prepared for all contingencies and positioned military forces to quickly evacuate Americans.

And although the withdrawal has been tumultuous and the toll on the Afghan people will probably be costly, Americans have long favored ending the conflict, and Biden and Harris may end up benefiting politically from the decision to withdraw.

Harris said during the 2020 primary that she supported a pullout from Afghanistan, and she voted for an unsuccessful 2017 effort in the Senate that would have rescinded the 2001 authorization to use force throughout the region.

She wrote that her support for withdrawing was contingent on ensuring “that the country is on a path to stability, that we protect the gains that have been made for Afghan women and others, and that it never again becomes a safe haven for terrorists.”

All of those conditions are in significant doubt. Most observers expect the Taliban will treat women harshly, returning to rules that exclude them from schools and the rest of society and subject them to violence and death if they resist. The country’s president has fled. Intelligence experts worry it will become a haven for terrorists.

“There’s no question that people understand that these are people’s lives here,” the Harris advisor said, when asked if the vice president has empathy for those left behind, including women. “Obviously, she has been a champion for women her entire career.”

The official said the administration is doing everything it can to support women and girls.

If anyone understands Harris’ predicament it is Biden. As vice president, he was tethered to another president’s policy in Afghanistan. Unlike Harris, he has long tried to make it known that he disagreed with President Obama’s decision to send in a surge of 30,000 additional troops in 2009 and instead would have opted for a drawdown.

But Biden had by then already established his own track record as a longtime senator who chaired the Foreign Relations Committee.

“It’s quite normal that she would be in the learning mode but not really central to this,” Kamarck said, adding that Biden “was a thought leader on this ages ago.”

That is why it didn’t surprise foreign policy experts when Biden, who spent the 2020 campaign sharply criticizing then-President Trump’s policies, followed through on plans laid by Trump to pull out U.S. forces this year.

Most vice presidents maintain a more dutiful posture. Mike Pence, who served a tumultuous four years under Trump, spent four years praising the president in such hyperbolic terms that he drew ridicule.

He rarely differed with his boss in public until the end, when Trump inflamed masses of violent rioters who tried to overturn the 2020 election results on Jan. 6 and attack Pence for doing his constitutional duty.

Pence read numerous biographies of prior vice presidents and absorbed the lesson that “when you’re in that role, it’s your job to advocate the policies of the president,” said Marc Short, his former chief of staff.

Pence, a hawkish conservative who has presidential aspirations, wrote an op ed published Tuesday night in the Wall Street Journal that was highly critical of Biden’s actions in Afghanistan while defending Trump’s. .

But like Harris, he will own a piece of the withdrawal that Trump negotiated and Biden carried out.