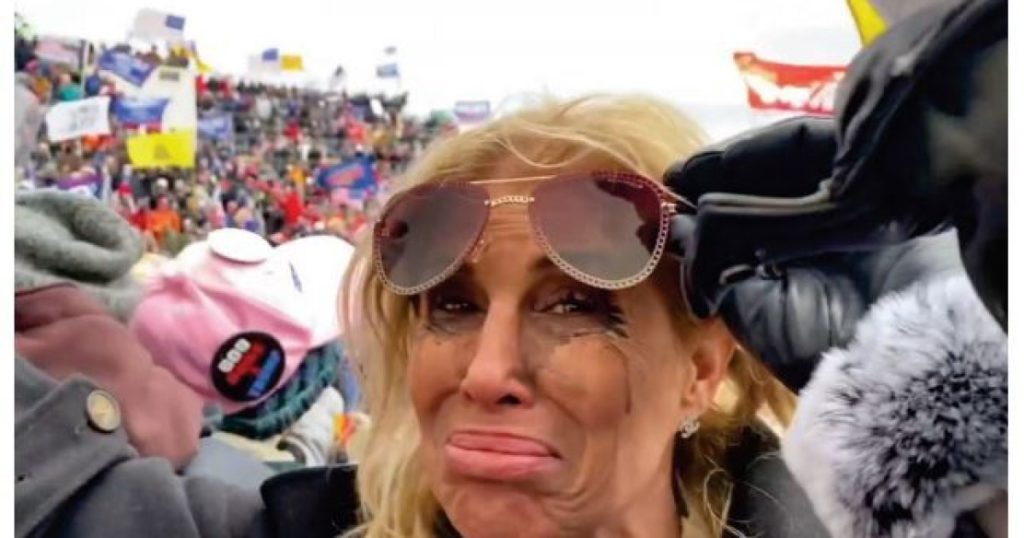 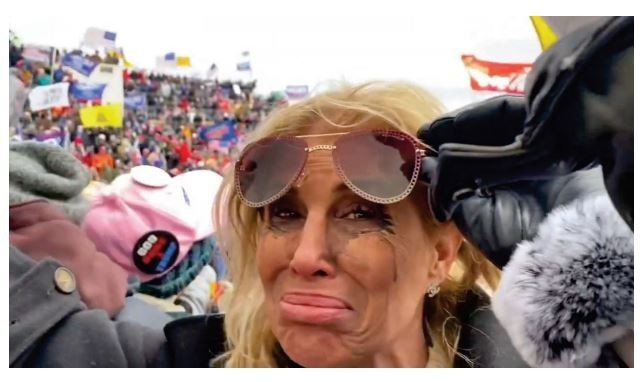 Beverly Hills esthetician and eyelash stylist Gina Bisignano was so present on social media that the federal criminal complaint against her practically wrote itself.

The story of a 52-year-old salon owner who charted a dark path of disinformation to the U.S. Capitol on Jan. 6, where she allegedly grabbed a bullhorn and urged rioters to take up weapons, is backed by one social media post after another embedded in the Department of Justice filing.

There is Bisignano in her Louis Vuitton sweater, filmed in front of the Capitol talking about her business and hometown as the riot was getting underway. There she is again, addressing rioters with a rant about globalists, George Soros and stolen votes. And again, calling for weapons and gas masks moments before a rioter attacks an officer with what appears to be a baseball bat.

Now, Bisignano has gone silent online. She is not allowed on the internet. Not because social media platforms banned her, but because a federal judge did. If Bisignano goes online while awaiting trial, she risks being jailed.

Judges have long been reluctant to ban anyone from the internet, a restriction that essentially cuts a person off from much of modern society and has been reserved mostly for accused and convicted pedophiles. But as toxic disinformation becomes an increasingly dangerous threat, driving domestic terrorism and violence, the courts are facing vexing new questions around how often and under what circumstances those accused of taking part should be taken offline altogether.

“We are headed into uncharted waters,” said Nina Jankowicz, a fellow at the Wilson Center, a Washington think tank, where she studies disinformation. “Given the threats we see continuing and the heightened alerts, it is clear things are not dissipating. … That is why judges are making these calls.”

In the case of Bisignano, the ban might have been an easy one for the judge to make. The defendant asked for it. Her lawyer saw it as one of the few bargaining chips the Capitol riot suspect from California had to stay out of jail for now.

“If it weren’t for social media, she wouldn’t even be a defendant,” said Bisignano’s attorney, Charles Peruto. “She knows that is what got her jammed in the first place.”

Yet attorneys for others accused of taking part in the attack on the Capitol are aggressively fighting the restrictions, and judges are struggling with how far to take them.

Prosecutors have moved to bar at least five defendants in the Capitol insurrection from going on social media platforms or even going online at all, according to a review of court filings by The Times. Those defendants are awaiting trial dates that will be months away as the Justice Department grapples with one of the most complex and all-consuming investigations in its history.

They include John Sullivan, a Utah man accused of obstructing Congress as he allegedly joined the rampage through the Capitol in tactical gear, encouraging rioters to do damage. Over the objections of prosecutors, a federal magistrate judge ruled Sullivan may continue supervised use of Facebook, Twitter and “encrypted platforms.”

In arguing for the ban, prosecutors pointed to video of Sullivan threatening police, breaking a window and telling other rioters “we gotta get this s— burned.”

Yet Sullivan’s attorney, Steve Kiersh, argued that the defendant was there as a journalist, claiming he sold some of his footage to news networks. He accused prosecutors of trying to impede his client’s ability “to communicate the way the vast majority of Americans communicate.” The restriction, Kiersh wrote in a court filing, would prevent Sullivan from keeping up with friends and family online or even checking the news, as media websites, which invite user comments, fall under the umbrella of social media.

Such concerns drove the U.S. Supreme Court in 2017 to strike down a North Carolina law that prohibited convicted sex offenders from using social media platforms. The court found that the ban unconstitutionally put out of reach “what for many are the principal sources for knowing current events, checking ads for employment, speaking and listening in the modern public square, and otherwise exploring the vast realms of human thought and knowledge.”

“Courts are recognizing that social media is very important to people’s lives in a number of ways,” said Alexis Karteron, director of the Rutgers Constitutional Rights Clinic. In September, the Rutgers clinic and the American Civil Liberties Union persuaded a federal court to block enforcement of a New York law broadly banning social media use by sex offenders.

“There are unquestionably serious rights at stake,” Karteron said.

The Ohio Supreme Court found as much in June, when it threw out a protective order prohibiting a man from posting on social media about his mother and sister. The man had accused each of them of foul play in the deaths of their husbands, even as police found no such thing. The state’s high court ruled 7 to 0 that the prohibition was an unwarranted infringement on his rights to free expression.

“The potential abuse of speech rights in the future cannot justify the blanket prohibition imposed here on … speech before it has even been uttered,” the court wrote.

As the courts strain to navigate the implications of cutting people off from social media in a society where its use is increasingly an essential function, the surge of criminal behavior driven by disinformation is making the task more challenging.

“There’s some real concerns that people have that social media has led people [to] abnormal conduct … to make poor decisions,” Washington, D.C., Magistrate Judge Zia Faruqui said during a late January hearing, as he weighed whether to impose an internet ban in one of the highest-profile cases following the attack on the Capitol. The defendant, 22-year-old Riley Williams, is accused of helping steal House Speaker Nancy Pelosi’s laptop during the insurrection.

“I want to do everything I can to make sure that Ms. Williams stays within the conditions of release and doesn’t find herself falling back into something where she can cause herself more problems,” Faruqui said. “But, obviously … it’s a fine line between paternalism and conditions of release.”

At a court hearing, Williams’ attorney said she does not have the laptop, and a search of her house and car by law enforcement did not locate it. The attorney, A.J. Kramer, said a key government informant against Williams, described as a “former romantic partner” in court papers, has a vendetta against her. The FBI says Williams was captured on video and in social media posts directing rioters toward Pelosi’s office and bragging about stealing from it.

Beyond the legal and ethical challenges at issue, Faruqui confronted simple practical ones. After prosecutors warned that Williams might use the internet to destroy evidence such as social media postings and direct others to do the same, he ruled that she must stay off the internet and use only a flip phone to make necessary calls. But then came the question of whether Williams could even watch TV.

A prosecutor at the hearing pointed out that smart TVs can access the web. The judge noted even some refrigerators are now connected online. A back-and-forth ensued over how Williams might be able to watch television while awaiting trial. It lasted a while. There was chatter about the Netflix app.

The judge finally ruled that Williams could watch television under the supervision of her mother, and that tapping into the device’s web function could send her right back to jail.

The lengthy back-and-forth over all the ways the court’s effort to keep Williams from potential criminal behavior online could spill over into isolating her from society altogether underscored the challenges ahead, as more crimes are hatched over social media, and prosecutors move to boot perpetrators offline.

“These bans are not something that should be considered for your average criminal,” said Jankowicz. “But these are not your average cases.”