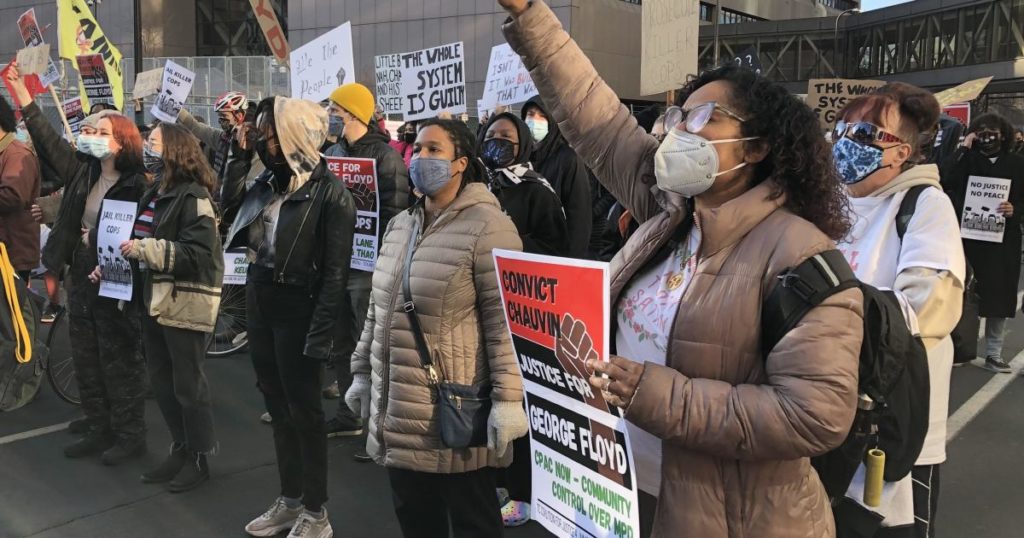 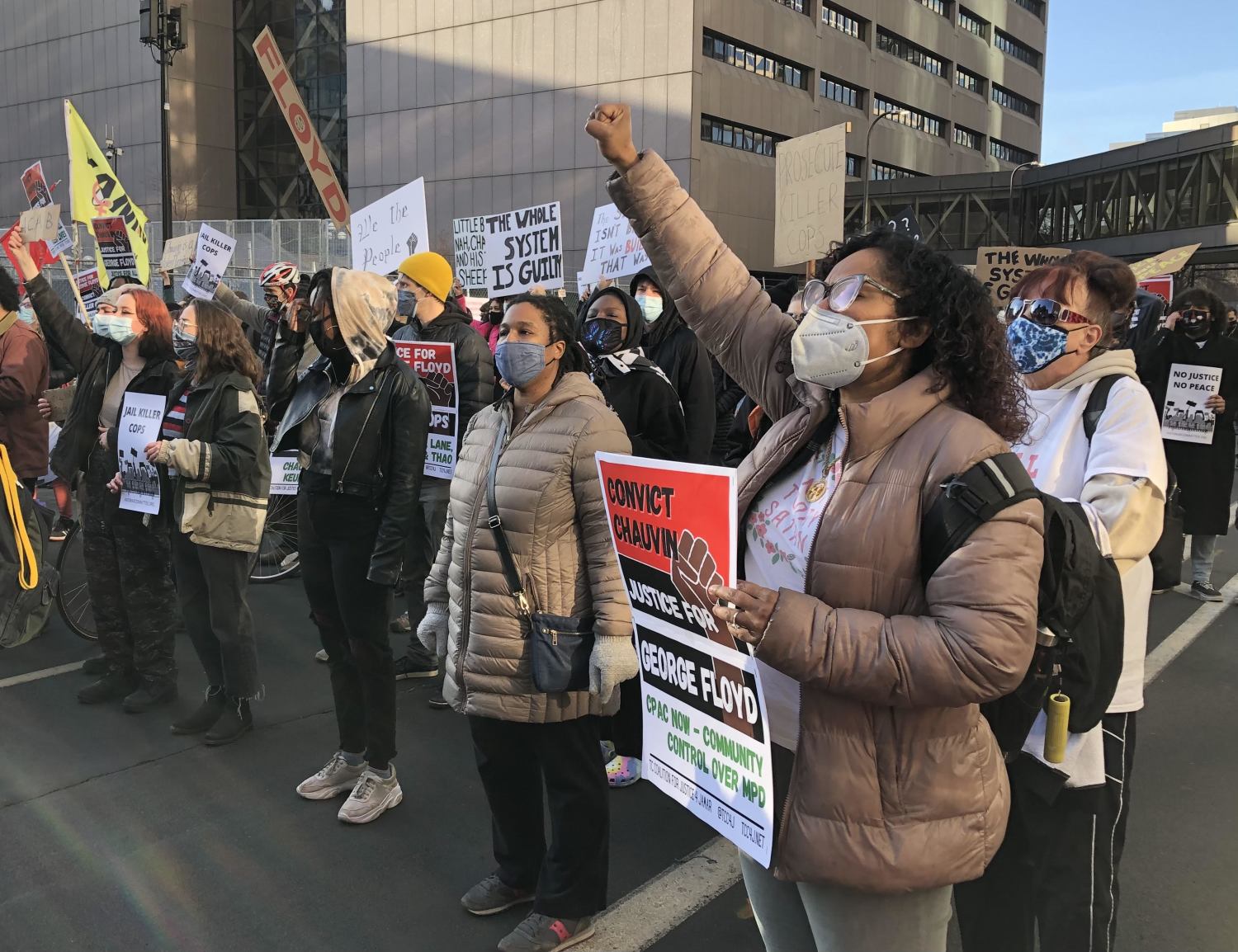 As hundreds of protesters chanted outside the heavily fortified downtown courthouse here Monday, a judge paused jury selection in the trial of the first police officer charged in the killing of George Floyd.

Hennepin County District Court Judge Peter Cahill said he wanted to consult a state appeals court about whether to proceed with jury selection while a third-degree murder charge against former police Officer Derek Chauvin was unresolved. Cahill dismissed prospective jurors after a hearing but planned to reconvene Monday afternoon and warned jurors to be prepared to return Tuesday.

The proceedings against Chauvin, 44, were live streamed online. He appeared in a navy blue suit and tie and a black mask, occasionally taking notes. Clear plastic dividers ran down the middle of the defense and prosecution tables and separated the judge from the rest of the courtroom. The seat allotted for Chauvin’s family was unoccupied.

The scene outside the courthouse was tense as sheriff’s deputies stood among concrete barriers and fences topped with razor wire. Hundreds of demonstrators marched nearby in a city that last year became the epicenter of protests against racial injustice. Some on Monday carried a banner that said, “The world is watching.” Many waved signs that said “Convict Chauvin,” “Prosecute killer police” and “The whole system is guilty.”

Those inside the 18th-floor courtroom couldn’t hear protests on the streets below. The judge limited attendance to 30 people due to the pandemic, including one rotating member of Floyd’s family, his sister Bridgett Floyd, 30, who had traveled from North Carolina and was expected to speak outside after court.

“We’re a strong family. We’re going to push through,” said Floyd’s aunt, Angela Harrelson, 58. “We’re kind of frustrated we can’t all be in court together.”

Harrelson, 58, lives in a Minneapolis suburb and attended a morning prayer near the intersection where Floyd was stopped by Chauvin and other officers last May and accused of using a fake $20 bill at a nearby convenience store. The area — now known as George Floyd Square — is filled with murals and memorials, but Harrelson was nervous to attend after a fatal shooting in the area Saturday. She said she would be watching the trial closely with her relatives.

“We hope the process will be fair,” Harrelson said.

Even if it is, it will be painful, she added, because, “I’ll have to relive everything again.”

Chauvin faces second-degree murder and manslaughter charges. Video of the 46-year-old Black man pinned under the white officer’s knee for roughly 9 minutes ignited demonstrations, vandalism and fires that caused millions of dollars in damage to more than 1,500 buildings in the Twin Cities.

Chauvin’s case has been separated from those of three other former officers charged with aiding and abetting in Floyd’s death: J. Alexander Kueng, Thomas Lane and Tou Thao. They’re expected to stand trial together in August. All four were fired by the department.

Cahill held the brief hearing Monday to determine whether to reinstate a third-degree murder charge against Chauvin. A state appeals court on Friday ordered Cahill to reconsider the charge, which he had dropped last fall.

Chauvin’s attorney, Eric Nelson, told the judge that he plans to appeal the higher court’s ruling to the state Supreme Court this week, but that shouldn’t delay jury selection.

Prosecutor Matthew Frank with the state attorney general’s office asked the judge to halt jury selection until it’s clear what charges Chauvin faces. His office filed a motion with the appeals court to prevent the trial from moving forward until the issue is resolved.

“We’re not trying to delay this case,” Frank said. “We want to try it right, and we can only try it once.”

Cahill said waiting for the state Supreme Court to rule could delay the trial by at least a month. Questionnaires have already been sent to prospective jurors, and the process is expected to take at least a month. City officials have been planning for months to secure the city should riots erupt, business owners have boarded up their establishments and residents have been preparing to protect their neighborhoods.

Protesters were peaceful Monday, and while hundreds attended, the gathering around the courthouse was small compared with the massive marches and rallies last summer that shut down some of the city’s main thoroughfares. Police kept their distance.

“We want to set the tone that from the outset of this trial we are going to be watching and exerting pressure on the justice system to ensure that justice is served,” said one of the organizers, Jae Yates, 27.

Minneapolis consultant Samantha Pree-Gonzalez brought her 15- and 10-year-old sons to protest. The U.S. Army veteran medic, a Los Angeles native who served in Afghanistan, was anxious as she stood amid a crowd. Protesters blocked the street with their cars and briefly faced off with sheriff’s deputies. Last summer, Pree-Gonzalez, who described herself as a Black Chicana, said police surrounded her and other protesters in the same area as she treated the injured.

She was nervous to return but also moved.

“It’s important to be here, to exercise our constitutional rights, to join together in love and light in support of the family” of Floyd, she said. “If we can’t get justice here. We can’t get it anywhere. These issues are everywhere. There’s no running from it.”