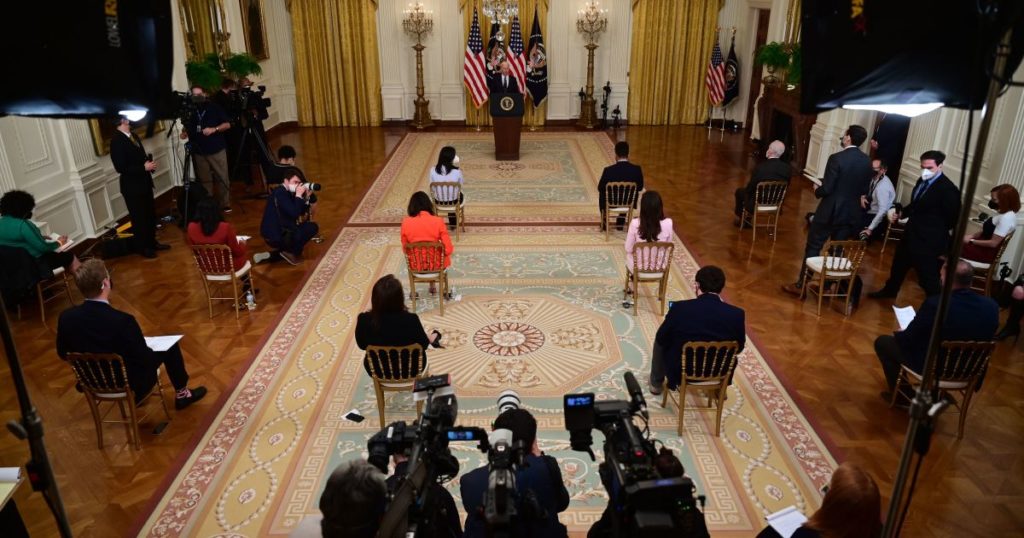 If the Biden White House were a factory, management would post a sign at the front gate: 68 days without a presidential gaffe.

What has come over Joe Biden? His first two months as president haven’t been perfect, but they’ve been as close to it as this 78-year-old career politician has come in his long and bumpy career. He passed his $1.9-trillion COVID relief bill in only 51 days; now he’s working on a $3-trillion recovery plan — for an economy that’s already growing thanks to accelerating vaccinations.

And he held his first full-scale news conference last week without forgetting who he was or exhibiting any of the other signs of mental decline that former President Trump warned us about.

Unlike many first-term presidents, Biden has survived his first 60 days without major crises. The increasing number of migrant children arriving at the southwestern border could grow into a disaster, but it isn’t one yet.

Biden still gets tangled up in words now and then. And like many politicians, he sometimes exaggerates or bends statistics to his liking. At his news conference last week, for instance, he said “the vast majority” of migrant families are being turned away at the border; that was true earlier this year, but it isn’t true now.

But he’s certainly not been a “gaffe machine” (as he once called himself). Biden has belatedly learned message discipline. Early in his presidential campaign, he engaged often in unscripted exchanges with voters and reporters, but once the coronavirus imposed a lockdown, the candidate discovered that he fared better with a little less exposure. It’s no accident that Biden waited longer to hold his first news conference than any other modern president.

That irritated some members of the media, but it probably comes as a relief to voters.

Trump was noisy and omnipresent; he rarely allowed a day to pass without appearing on television, or at least on Twitter. Biden ran for president as the opposite — as someone who would replace chaos with normalcy and calm. In practice, that has meant fewer media appearances and less off-the-cuff controversy.

The contrast with Trump works to Biden’s benefit. “God, I miss him,” Biden joked at his news conference — and there was an element of truth in it.

Most important, perhaps, Biden has landed on a deceptively simple political strategy: He’s deliberately set modest expectations and then exceeded them. He’s underpromising and overperforming. That’s a recipe for success in any line of work.

Case in point: the goals Biden set for the national vaccination program. The first target he set, 100 million vaccinations in 100 days, was a catchy slogan but an easy-to-reach lowball; he got there in only 58 days. Even Biden’s new goal of 200 million vaccinations is not much of a stretch; it’s merely the number that will be reached if the current pace of immunization continues.

Biden has relentlessly avoided promising too much. “I can’t guarantee we’re going to solve everything,” he said.

Yes, he’s got a long list of campaign promises, including gun control, fighting climate change and reforming immigration, but he’s made it clear he’ll turn to them only after taming the coronavirus and reviving the economy.

“I got elected to solve problems,” he said. “And the most urgent problem facing the American people … was COVID-19 and the economic dislocation.” Everything else, he said, comes second.

That’s sound strategy. A president who tries to get everything done risks accomplishing nothing.

He isn’t Barack Obama, who created great expectations with soaring rhetoric about midwifing post-racial America and halting the oceans’ rise. He isn’t Donald Trump, with his bold promises to “drain the swamp” and end politics as usual.

During the campaign, Biden said he hoped to enact reforms that would be as far-reaching as Franklin D. Roosevelt’s New Deal, the most ambitious expansion of federal programs in history.

But he hasn’t talked about FDR much since his inauguration. Now, he warns, politics is “the art of the possible.” The goals are still there, but they may not all come true.

He’s not FDR; he’s Joe Biden from Scranton, “putting one foot in front of the other and just trying to make things better,” as he put it at the news conference.

What president couldn’t succeed by that modest standard?

To be sure, he may face rough waters ahead; plenty can go wrong, and some of it will. Most Trump voters will never warm to him, no matter what he claims. Progressives will inevitably be disappointed when he doesn’t pass every item on their wish list. Republicans in the Senate will fight tenaciously to thwart his agenda.

But the Biden we’re seeing now, putting one foot in front of the other, is the most effective version of Joe Biden ever seen — and I’ve watched most of his career.

Maybe there’s something to be said for electing a lifelong politician who knows something about how to make government work.

Maybe Biden’s age and experience have turned out to be advantages, not handicaps.

Or perhaps it’s even simpler: Maybe character is still what matters most.