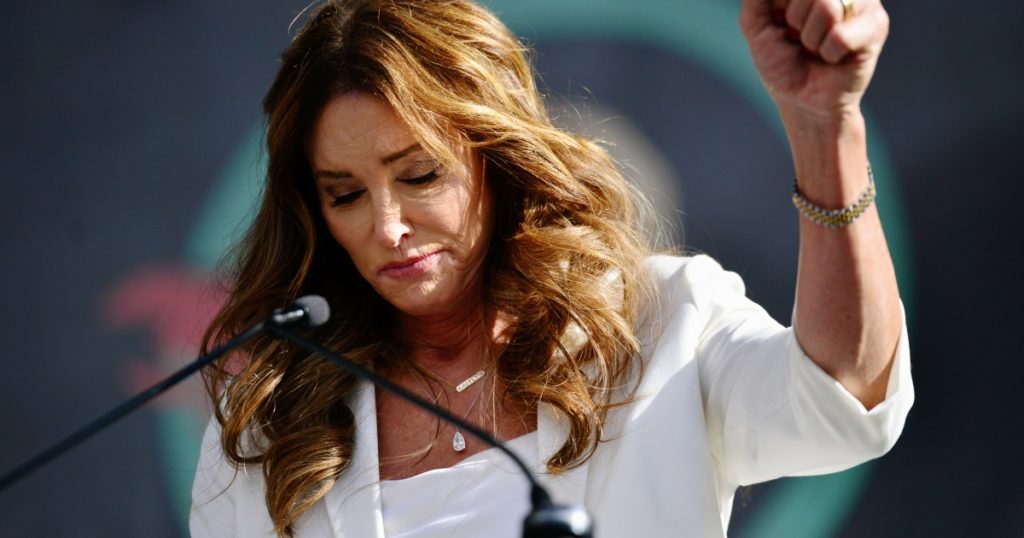 Caitlyn Jenner found out this week that running for governor is trickier than appearing on reality television.

During her first major television interview — an on-air embrace on the Fox News “Hannity” show Wednesday — Jenner lamented that a friend is leaving California because he hates seeing “the homeless” when he walks down the street. She was interviewed in her private airplane hangar. The friend has one, too. But he’s packing it up for a move to Sedona, Ariz.

When asked by TMZ on Sunday whether trans girls should be allowed to compete in sports, the 71-year-old said “it just isn’t fair. And we have to protect girls’ sports in our schools.” Yet the transgender Olympic athlete has competed in women’s golf tournaments, in particular the LPGA Tour‘s ANA Inspiration tournament in Rancho Mirage.

Jenner did not respond when asked about the LPGA tournament during an interview with The Times on Thursday. A campaign aide ended the interview and later responded to a follow-up question sent by email: “Caitlyn was playing in a charity tournament with LPGA pros where everyone was playing from the same tee. It’s disappointing some want to use a charity event in a political way.”

Jenner announced April 23 that she was entering the race to unseat Gov. Gavin Newsom in the coming recall election, but this was the Republican’s first week actively campaigning. She gave three major interviews — to conservative commentator Sean Hannity, CNN and the Los Angeles Times. She released her first ad. And she beefed up her campaign website.

Jenner and her campaign staff are struggling to move beyond the OMG phase of her candidacy — OMG, another celebrity politician! OMG, a transgender woman running for office! They want to talk policy, hash out the big problems facing this big state and tell voters how the candidate would work to solve them.

In the 2003 recall, with 135 gubernatorial hopefuls of varying fame, only Arnold Schwarzenegger managed to hitch celebrity to substance with any success. And that’s because the former Mr. Universe/Conan/Terminator had spent the previous year campaigning statewide for Proposition 49, a measure to increase funding for before- and after-school programs. It was his first political victory.

“The four candidates who ended up with more than 1% of the vote [in the 2003 recall] all had some involvement in the statewide election the year before,” said Mark Baldassare, president of the Public Policy Institute of California.

Proposition 49, Baldassare said, gave Schwarzenegger “not just the exposure but the opportunity to find out what the size of the state was and the different media markets and what the difficulties were and how to spend his time and energy.”

Jenner explicated her new life as a transwoman over two seasons on E! in a documentary series called “I Am Cait.” Her political activism has focused on LGBTQ issues.

Her ad, released Tuesday, won’t be much help moving Jenner beyond celebrity and questions of gender. On the sort-of substantive side, it is beautifully done, three minutes long and filled with scenes of what Jenner sees as California’s former glory posting up against a dystopian view of homeless encampments, closed schools and shuttered businesses all compliments of Newsom.

But it begins with the perfectly coiffed and manicured candidate hunting through her Malibu home for the gold medal she won as a decathlon champion in the 1976 Olympics. There’s video of Jenner, triumphant, crossing the finish line, and present-day of the candidate, long hair blowing in the breeze, staring across California’s golden foothills.

Until Tuesday, all you could do on her campaign website was buy “Caitlyn for California” swag — beer cozies, wine glasses, tees and more — or donate to her nascent run for office. Now it boasts a list of “solutions” to what ails California. They are short on detail and resemble those posted by her three Republican rivals: businessman John Cox, former Rep. Doug Ose and former San Diego Mayor Kevin Faulconer.

Speaking with The Times on Thursday, Jenner fleshed out some of her proposals on governing the fifth biggest economy in the world.

On her website, Jenner promises that, as governor, she would “veto any tax increases. Period.” But the state Legislature has a veto-proof Democratic majority. Jenner acknowledged that cutting taxes in a deep-blue state like California “would be very tough, but it can be done.”

“As governor, I cannot lower taxes. I can’t, say, write a bill, lower taxes,” she said. But she noted that “we have about a $16-billion surplus so far this year. In the state. People don’t realize that. There is plenty of revenue there. Maybe we have to give back, give that back, to some of the people who paid into it, to give them a little bit of relief. That’s No. 1. I can do something like that.”

On Wednesday on the Fox News “Hannity” show, she said that, as governor, she would build the border wall with Mexico to stop illegal immigration.

“I am all for the wall,” she told the supportive host. “I would secure the wall. We can’t have a state — we can’t have a country without a secure wall.”

But on Thursday, when asked by The Times how she would get the wall built — it’s under federal jurisdiction, not state — she ignored the question and pivoted to the pandemic.

“First of all, I think the most important thing right now is to open this state up,” she said. She blamed Newsom for doing a “horrible job” of ending the state’s lockdowns. And she lauded Florida for the way it handled the pandemic.

“Disney World in Orlando, Florida, opened up last July, nine months ago,” she said. “Disneyland, in Anaheim, opened up last week. Just think, in that nine-month period, all the jobs that were lost in the Anaheim area.”

She said California officials “could have opened things up safely much quicker, particularly the schools. That is the No. 1 thing. We have kept these schools closed for a year. The impact that it’s going to have on these children is going to last them the rest of their life. And that never had to happen.”

Jenner received her second shot of the COVID-19 vaccine about a week ago and said she is a whole-hearted vaccine supporter. When asked how she would persuade those who are hesitant about being inoculated, she demurred.

“It is a personal choice,” Jenner said. “It’s your medical history. It is your decision. I don’t want government getting involved. We’ve done a great job of getting vaccines available to people, and it’s so simple to do. But it’s your decision and nobody else’s.”

Jenner said her first week of active campaigning has been “a bit hectic, but very good.” And, while she wondered how people would respond to her candidacy, she said, what she has seen so far has been overwhelmingly positive.

“California has never even had a woman governor,” she said. And “here I am, little Caitlyn. I’ve lived my life authentically for the last six years. I’ve never been happier. Things have never been better. And I never could have done this in my old life.”

It was a topic she also broached during the Hannity interview Wednesday.

“You said to me that Bruce Jenner could not be doing this, what you as Caitlyn Jenner are doing, meaning running for governor,” Hannity said, setting up his final question. “What did you mean by that?”

Jenner sighed. Paused. And tiptoed into a three-minute monologue about God and family, secrets and lies, about the things that held her back and the hope she has for the future.

“When you deal with gender dysphoria, it affects you your whole life,” she began. “I mean, you’re a little kid, you’re wondering – I grew up in the ’50s and ’60s, and nobody knew what it was, there wasn’t even a name.

“And so, my whole life I struggled with this issue,” she said. “I snuck around. I wasn’t honest with myself — a lot of times not honest with other people. … I can be myself now — I couldn’t do it before, because I had too many secrets.”

She talked about sitting down with her pastor, about struggling to understand why God had put her, a woman, in a man’s body, about what her purpose was on this earth, about whether she was doing the right thing. These questions, she said, were “always in my heart.”

“After long thought, I said: ‘You know what? At this point in my life, my kids are raised, everybody’s fine. Maybe it’s time I take care of myself,’” she told Hannity.

“Because, when that day comes, and you go up to the Pearly Gates, and you’re walking up the stairs, and you’re seeing God in front of you, and you just ask that question: ‘Did I do a good job? Did I do the right thing?’ And just hope he says, ‘Hey, come on in.’”