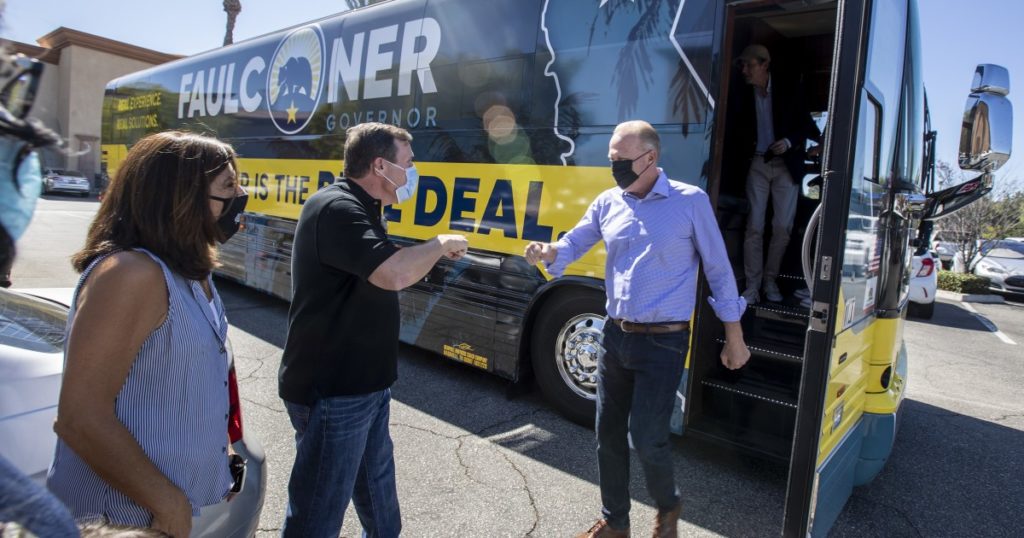 With less than three weeks to go before the recall election, Republican candidates hoping to replace Gov. Gavin Newsom skittered around Southern California on Saturday arguing that they are the best choice to replace the Democrat.

Their appearances come at a critical time in the race. Though election day is Sept. 14, each of California’s 22.3 million registered voters was sent a mail-in ballot because of the pandemic. A little over 14% had been returned as of Friday, according to the secretary of state’s office, meaning millions of votes are still up for grabs.

Conservative talk radio host Larry Elder, a late entrant into the race and the front-runner among the 45 replacement candidates, was the focus of fire from Olympian-turned-reality-television star Caitlyn Jenner and former San Diego Mayor Kevin Faulconer.

“He doesn’t help the cause because he’s so far right,” Jenner told reporters after holding an afternoon town hall in a half-empty hotel ballroom in Pasadena. “California is center-left. And that’s where I come in.”

It was the first town hall held by Jenner, who decamped from the campaign trail for weeks to film a reality television show in Australia. She made an enormous splash when she entered the race in April, but has failed to gain a foothold, polling in the low single digits.

She spoke about rising homelessness and crime, the high cost of housing and Newsom’s handling of the pandemic, including attending a posh maskless birthday dinner for a lobbyist while he urged Californians to avoid multifamily gatherings.

“Gavin Newsom lived it up while he shut us down,” Jenner said to raucous applause from the roughly 30 people in attendance. She went on to criticize his use of emergency powers during the pandemic. “He’s kind of like a dictator, a hypocrite.”

Faulconer, who has been pummeling Elder over his positions on women in the workforce for several days, warned that his values do not align with Californians’.

“The more that Californians are learning about Larry Elder, the more they’re seeing his ideas are dangerous,” he said in an interview on his campaign bus, which displays the motto, “Real experience. Real solutions,” shortly after he greeted voters in Santa Clarita.

More than 50 people, mostly masked, packed into a small banquet room at Black Bear Diner to hear Faulconer. He touted his experience working with Democrats when he led San Diego.

“I know how to get elected in a deep blue city in a deep blue state,” he said. “We’re going to win by addition. This governor is out there talking — he believes the whole thing is a Republican recall. I got news for you, governor. It’s Democrats, it’s independents, it’s Republicans, it’s Californians of all walks of life who want a change at the top. That’s why this recall is going to be successful.”

Newsom didn’t have any public events Saturday, but he spoke via Zoom to virtual phone banks and the state Democratic Party executive board. He pointed to the mail ballot returns, which show that more than twice as many Democrats have returned their ballots than Republicans, according to Political Data Inc.’s ballot tracker.

“Early ballot returns are proof of their hard work and the importance of the work ahead of us,” said Newsom, who plans to greet congregants at churches in Northern California on Sunday.

Voters are being asked two questions on the ballot: do they want to recall Newsom, and, regardless of how they voted on the first question, who should replace him if the recall is successful. There are 46 candidates on the recall ballot, though one dropped out after suffering a heart attack earlier this month.

Assemblyman Kevin Kiley was the sole major GOP candidate who didn’t snipe at his Republican rivals, instead effectively asking voters what they had to lose by supporting the recall given that another election would take place next year as he campaigned in San Diego, San Clemente and Stanton on Saturday.

“Our closing argument to voters is to take a chance on change,” he said in an interview. “You have a lot of people in this state who are extremely frustrated by the path we’ve been on and are looking for something different and … my basic pitch with the recall is you’re only signing on for one year, you’re not signing on for four years.”

Elder shot to the front of the polls after entering the race in mid-July.

After rallying supporters in Ramona and speaking to the Police Protective League, Elder said his focus remained on Newsom’s record on issues such as homelessness, the pandemic and public safety. He also released a Spanish-language ad on Saturday featuring the endorsement of former state Senate Majority Leader Gloria Romero.

Latinos have long been taken for granted by the Democratic party, Elder said, and he believes he can appeal to them because of his policies on issues such as school choice.

“They’re tired of being used. They know they’re not getting good-quality public schools, they know housing prices are pricing them out. They know the crime that is going up in our inner cities is disproportionally affecting Black and brown people,” Elder said in an interview. “These are the people the left claims to care about.”

Democrats, rallying Latinos in Sun Valley, argued that if the recall is successful, Elder as the state’s next governor would be disastrous for minorities.

“When you have a candidate who has elevated himself like Larry Elder, it scares us to death,” said Ron Herrera, president of the Los Angeles County Federation of Labor AFL-CIO. “He’s already come out as opposed to minimum wage, which would hurt countless Latinos and immigrant worker families.”

Herrera was joined by county Democratic Party Chair Mark Gonzalez, Los Angeles City Council President Nury Martinez and state Assemblywoman Luz Rivas, who urged supporters to encourage their grandmothers, tios and tias, and friends to vote no on the recall.

“We make up 40% of the state and we are a strong working-class community that was hit hard during this pandemic,” Gonzalez said. “We are the ones still working as essential workers, the ones who also lost our jobs and ended up in hospitals with COVID-19. Now is our time to respond to this Republican recall and to let them know we won’t be taken for granted.”

Businessman John Cox, who took a day off the trail Saturday, said he believes many voters haven’t turned in their ballots yet because they are undecided on the replacement question. The unsuccessful 2018 GOP gubernatorial nominee argued he would be the beneficiary of these votes, following the model of Charlie Baker of Massachusetts and Larry Hogan, two Republican businessmen who lead blue states.

GOP state Chair Jessica Patterson acknowledged that Republicans have turned in far fewer ballots than Democrats, which she attributed in part to former President Trump’s warnings about election integrity during the 2020 election. She said she expected many Republicans to vote in person.

“We are confident in the enthusiasm that our people have in turning out the vote, whether it be early or on election day,” she said in an interview shortly after speaking to volunteers in a Newport Beach strip mall before they headed out to canvass.

“People are fed up, they are tired, they’re hungry and they are ready for change here in California, and come Sept. 14 we are going to bring it back,” she said.