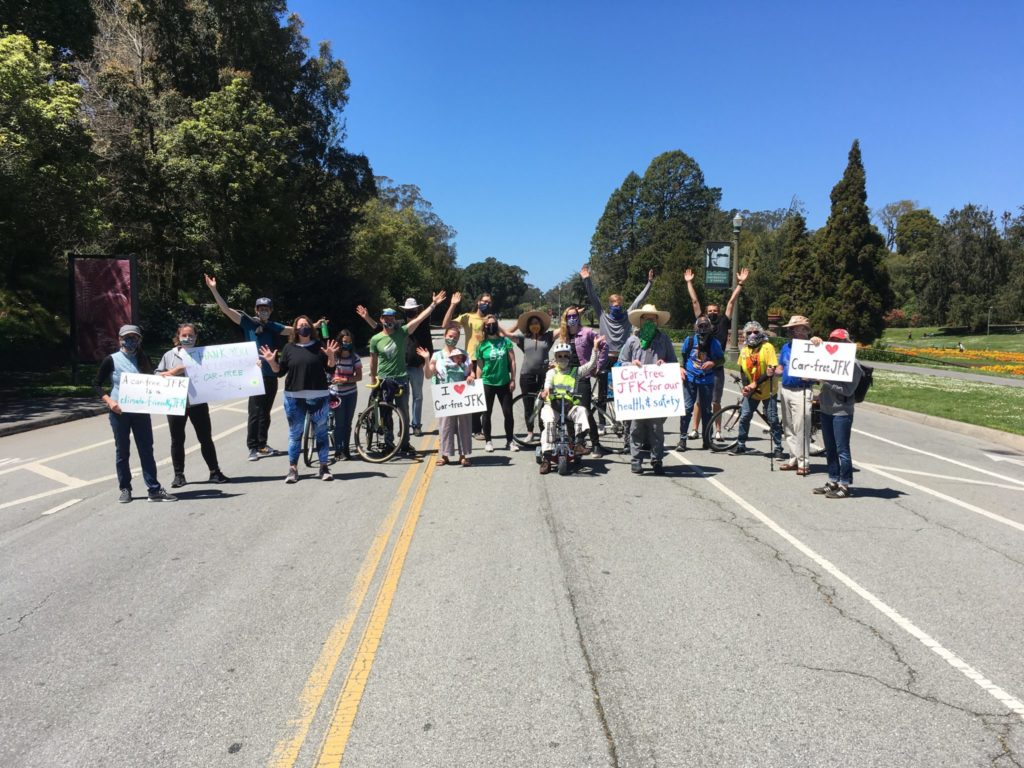 The gaslighting by pro-car lobbyists and politicians continued over the weekend with a story Sunday in The New York Times about efforts to turn J.F.K. back into a de facto freeway through Golden Gate Park. A quote near the end from Supervisor Gordon Mar, now infamous for his backroom deal to kill the Great Walkway, caused advocates for safe-streets to bristle: “They are less experienced at advocacy and this type of civic engagement than the bicycle coalition and the other groups of activists who are pushing for a car-free J.F.K. Drive,” he said of the museums, which want cars and parking back on J.F.K. Drive. “The leadership of institutions like the de Young and the Academy of Sciences don’t engage in local policymaking and political efforts as much as the folk on the other side.”

New York Times writer Adam Nagourney’s piece didn’t challenge that absurd assertion. In reality, while most safe-streets advocates are volunteers, the de Young employs Platinum Advisors, a professional lobbying firm, to do its “activism.” Just go to the S.F. Ethics Commission page, type “fine arts museums” in the “client” field and press search. For years now, Platinum’s Ryan Blake has been contacting city officials, as one City Hall-insider put it “setting the groundwork” for maintaining car traffic on J.F.K drive.

Here’s a screen capture of the calls over the last year:

These filings aren’t necessarily the only communications; these are just the ones that could be traced back to someone’s calendar if the ethics committee decided to do an audit. By registering these contacts, Platinum is being a good lobbyist (and/or covering its ass) explained an expert on lobbying in San Francisco. In case there was any doubt, the expert added that these filings are required only when a paid lobbyist makes a specific ask for a policy change and not “…if you called to ask how their mom is.”

That ask, of course, is to keep cars on J.F.K., Streetsblog’s City Hall insider confirmed.

Furthermore, as the Times pointed out, the museum, namesake of the $2.5 billion de Young family, had revenues of $56.4 million last year. For context, The San Francisco Bicycle Coalition brought in about $2.4 million. Although it seems he earns less now, the museum’s director, Thomas Campbell, brought home $1,428,935 in 2015 when he worked for the Met in New York City—twice the entire budget of Walk San Francisco.

The idea that the de Young is somehow a political David battling the Goliath of the Bicycle Coalition, Walk San Francisco, the Church of Eight Wheels, and the Streetsblog Empire, is ridiculous.

But it’s just the latest in the ongoing gaslighting perpetrated by those who would have motorists continue to dominate every inch of asphalt in San Francisco. Supervisor Mar, in the Mayor’s statement justifying the return of cars to the Great Walkway, was quoted as saying: “It’ll take new and robust investments in westside transit and transportation to truly address the traffic impacts, and it’s unreasonable to continue a 24/7 closure without them.”

Streetsblog is still waiting for Mar’s plan to turn the Great Highway into the Great Busway, so that can be accomplished. Perhaps that will come around the same time as Supervisor Shamann Walton’s plan to give Muni’s 44-O’Shaughnessy bus its own lane to speed up service between his district and the museums, since he claims the slowness of the bus is the reason a small amount of parking on J.F.K. drive can’t be eliminated.

Speaking of Walton, who can forget his famously nonsensical and deeply offensive claim that car-free J.F.K.is “segregationist” and “recreational redlining.” (Streetsblog has to wonder if the museum couldn’t do a better job reducing so-called “recreational redlining” by cutting off Platinum and using that money to subsidize parking in its 800-space garage).

Can this all get any more surreal? Certainly, that’s the question asked on social media, as seen in the example below:

London Breed and Gordon Mar: “Even when Great Highway is open to motor vehicles, bicyclists can still use the shoulders.”

Let’s be clear: the Great Walkway and car-free J.F.K. in Golden Gate Park force a tiny number of relatively wealthy (plus a small number of obscenely rich, powerful, and privileged motorists) to drive slower or look a little harder for parking (or, gasp, pay for private car storage). Mostly, it means motorists can’t use two of San Francisco’s most beautiful public lands as freeways.

The Mayor and many Supervisors of liberal bastion SF are too afraid to post about climate change today, because last week they celebrated removing a park and opening a highway. A highway that’s being washed away by the rising sea. They are well aware of their hypocrisy.

On the other hand, if Gordon Mar, Shamann Walton, and multi-millionaire museum director Thomas Campbell and his lobbyists succeed in their goals, more people will get maimed and killed for the crime of biking, walking, or roller skating in a park or along the beach.

And that’s a fact no amount of gaslighting can change.