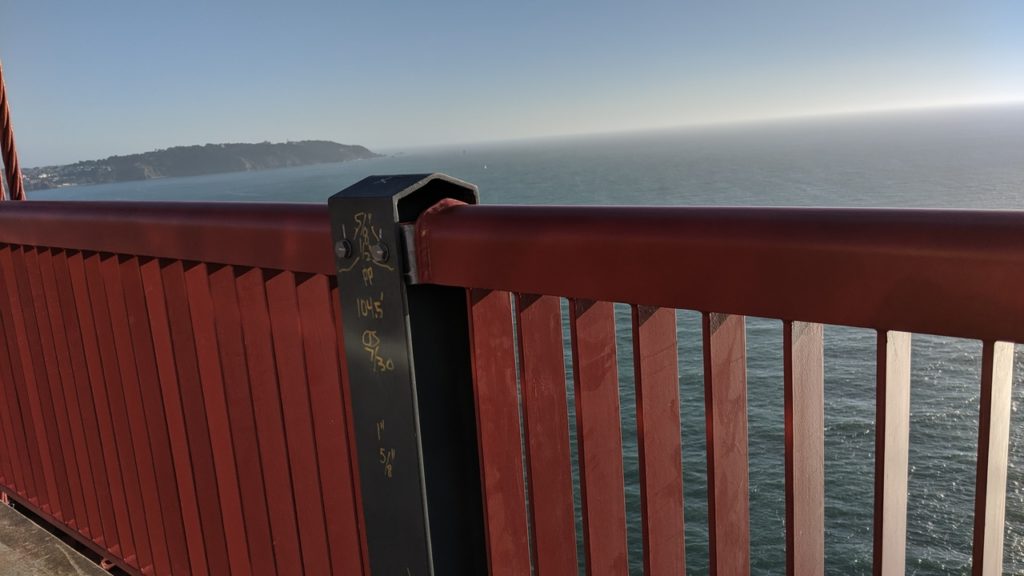 As part of a project to bolster the Golden Gate Bridge’s stability in strong winds, engineers modified the shape of the span’s western fence to reduce air resistance. However, now reports are coming in of gusts endangering cyclists. From an email to the Bridge District’s board from a regular bridge cyclist, John Potis, which he copied to Streetsblog:

It may have come to the notice of the Board that the Golden Gate Bridge now howls and whistles on windy days. This is due to the new configuration of the bridge railing which allows accelerated passage of wind through the upright pickets of the rail. Previously the upright pickets presented a 4” wide face to the wind, but the new pickets only present a 1/4” wide face to the wind. The old rail configuration helped to mitigate dangerous cross winds that the new railing now exposes all cyclists to.

Potis is a landscape architect who specializes in designing bicycle and pedestrian facilities. “Control of a bicycle is severely compromised with the new rail design and I urge the Board to investigate the situation and develop a remedy,” he concluded.

Warren Wells, Policy and Planning Director for the Marin County Bicycle Coalition (MCBC), told Streetsblog he agrees with Potis’s concerns. “All coverage so far has been about the sounds from the fence, which is disruptive–but in terms of my experience, going over the bridge in 35 mph winds, it’s barely rideable,” he told Streetsblog. “I rode over the bridge on a windy day a week ago and, even as a 3,000-mile/year rider, I was barely able to stay on my bike, something we’ve also heard from a number of people.”

He added that his organization is particularly concerned about tourists and inexperienced cyclists doing the ride to Sausalito and crashing because of strong winds. “One of our members (who was a daily GGB commuter at the time) raised this issue in August 2019, showing with a wind meter that the wind speed is two to three times higher with the new railing pickets compared to the old ones… that’s not a scientific study, but anyone trying to ride it can easily tell the difference.”

A statement from the bridge district pointed out that the new pickets are part of decades of work to make the bridge able to withstand high winds. The district did a series of engineering studies, some dating back to the 1990s, to look for ways to achieve that, and found that a “…new, less wind-resistant west railing was needed in order for the bridge to maintain its structural integrity under high winds – with potentially disastrous consequences for inaction. The Tacoma Narrows Bridge, famously seen writhing from wind-induced structural instability, is perhaps the most famous example of a bridge improperly designed to sustain strong winds.”

However, advocates complain that the impact on cyclists wasn’t properly evaluated.

For now, the district is monitoring wind speed and putting up signs warning cyclists. The bottom line is more analysis is needed–something the MCBC will be requesting. “While the west railing replacement will provide critical stability to the Bridge, we are also aware of and take seriously the potential challenges of increased wind speeds experienced by the many people biking the Bridge’s west sidewalk every day,” wrote a spokesperson for the District, adding that it is “…conducting outreach to bicycle advocacy groups such as the San Francisco Bicycle Coalition, bike rental companies, and the broader bicycling communities in San Francisco and Marin counties to alert people biking of the increased winds.”

“It’s tricky, because this is obviously an important project (lord knows no one wants the bridge collapsing), but I fear it’s being done in a way that will make an already dangerous bridge even more hazardous,” wrote Wells in an email to Streetsblog. “I analyzed some numbers that the Bridge District gave me and found that, compared to driving, you’re five times as likely to crash biking over the bridge and 21 times as likely to experience an injury. Those figures are from before this railing replacement started, and I suspect it’s only going to get worse.”

“It is distressing that the Golden Gate Bridge District did not take into consideration the effects of the new railing on cyclist safety,” wrote Potis in an email to Streetsblog.

Be sure to take the MCBC’s survey about wind and riding on the Golden Gate Bridge.

Note the Transportation Committee of the Golden Gate Bridge District will meet at 9 am, Thursday, June 24. The full board meets Friday, June 25.