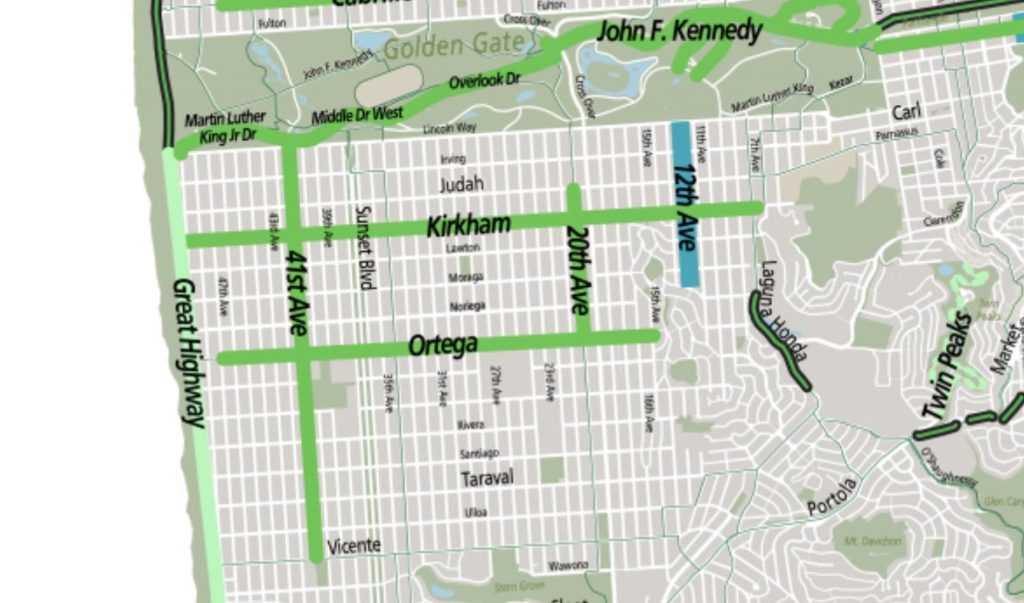 District 4 Supervisor Gordon Mar, apparently, is backing up a group of San Francisco Unified School District principals and demanding the removal of ‘slow streets’ around schools in his district. From a statement from Mar addressed to SFMTA’s Jeffrey Tumlin and Tom Maguire:

I have received a unanimous request for the immediate removal of the Slow Streets in District 4 from every SFUSD elementary school principal in my District, a request that has been echoed by PTA leaders throughout the sunset.

I am supporting the request of District 4 SFUSD leadership and asking you to remove the Slow Streets in the Sunset as schools resume in-person instruction.

And the same day, those slow streets disappeared from SFMTA’s map:

However, it appears the map changes may be an unlikely coincidence, at least according to Tumlin:

I did not authorize removal of Slow Streets in the Sunset, and I don’t yet understand why our online map got edited yesterday. New Slow Streets barricades will be replaced in slightly different configurations in the Sunset tomorrow

But going by Mar’s letter (read the full letter on Twitter) it seems clear the slow streets program does not have his support. And even on the SFMTA ‘slow streets’ page, all the streets in his district are marked “Not on the path to permanence.”

And then there’s the little matter of what’s actually happening on the ground with the Sunset’s slow streets–as in this tweet from D4 resident, BART board Director, and San Francisco Bicycle Coalition’s Janice Li’s:

How it started. How it’s going. pic.twitter.com/No3X2HGV0k

It certainly seems as if the Sunset’s slow streets are vanishing.

“A network of Slow Streets are a solution we needed before COVID. In a city where an average of three people are hit while walking each day, creating a citywide network of low-traffic streets for people to travel to schools, parks, and businesses is a must,” wrote Walk San Francisco’s Jodie Medeiros. “If Slow Streets in some neighborhoods aren’t succeeding, let’s look at why before calling for removing them.”

“We’re very confused and disappointed by how this all transpired. There were some clear misunderstandings and communications failures among SFMTA, Supervisor Mar and SFUSD. We look forward to a better public process and more clear decision making as we expand and make permanent the City’s network of Slow Streets,” wrote the Bicycle Coalition’s Nesrine Majzoub.

Streetsblog has a request into Mar’s staff about what’s going on with his district’s slow streets and will update this post.

As to the school district’s role in this, the “principals and Supervisor Mar discussed what amending the Slow Streets program could look like specifically to the streets directly adjacent to schools, and only during intake and dismissal. In their conversation, the principals never advocated for complete elimination of the City’s program,” wrote school district spokesperson Laura Dudnick. “Specifically, the principals were asking if some of the barriers could be adjusted so cars could safely pass through to avoid cars trying to squeeze through since schools will not have staff to monitor road behavior on all corners.”

But as advocates pointed out in the twitter exchanges, there’s nothing about the ‘Slow Streets’ program that prevents motorists from dropping off children at school–the program specifically allows motorists to access the streets, they’re just not supposed to use it as a through street. One thing is clear though, any notion of allowing kids to bike to school is going to be hamstrung if slow streets are removed.

Meanwhile, satirist Bob Gunderson had perhaps the best response to these developments:

Thank u @D4GordonMar !!!We motorists are reasonable and just want a “balanced approach” where we get an unparalleled virtually free on-street car storage network & unfettered car access to every single block in our 7×7 sq. mile city. Oh & something something kids safety whatever.