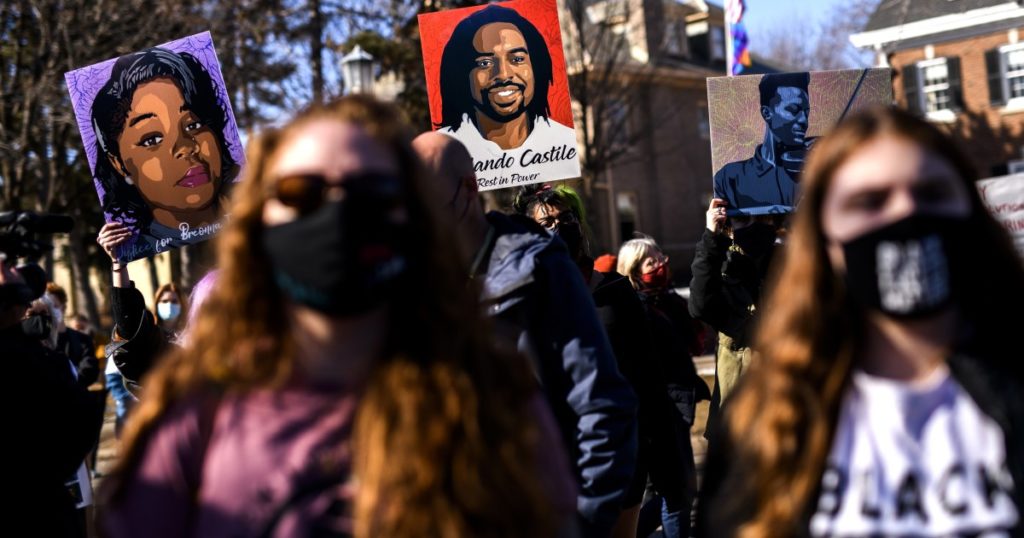 The former police officer seen kneeling for about nine minutes on George Floyd’s neck before he died last spring is due to go on trial, and Minneapolis is on edge, protesting, barricading and boarding up.

Several hundred people supporting the conviction of former Officer Derek Chauvin on murder charges gathered across the Mississippi River on Saturday in front of the governor’s mansion in St. Paul, chanting, “Prosecute the police!”

More protests were planned Sunday and Monday outside the courthouse where the case will be heard in downtown Minneapolis, now lined with protective concrete barriers and razor wire. The criminal prosecution of Chauvin, due to be broadcast live on Court TV, is likely to be among the most closely watched in U.S. history.

Floyd, 46, died at the hands of police responding to a 911 call by a convenience store clerk last May over a $20 bill the clerk suspected was fake. Floyd’s death was captured on video by a bystander and sparked months of protests against police brutality in Minneapolis and across the country.

The court proceedings are due to begin Monday, but could be delayed after an appellate court ruling Friday on the murder charges brought against Chauvin, 44, who served 19 years on the police force and now faces up to four decades in prison.

City officials have prepared for the trial with stepped-up security and community outreach intended to prevent a repeat of last year’s unrest, in which police responded forcefully to protest marches. Police enforced a curfew and injured protesters and reporters. Destruction ensued, with an estimated 1,500 buildings damaged or destroyed. The mayhem sparked calls for restructuring or defunding local police forces in major cities across the nation.

Last week, the city’s mayor, police chief and City Council held briefings outlining the public safety response they’ve been developing since last summer, modeled on security provided for the NCAA tournament in 2019, Super Bowl in 2018 and following the 1992 trial of the Los Angeles police officers who beat motorist Rodney King.

Later this month, when lawyers are expected to make opening statements, at least 2,000 National Guard troops will be deployed in the city, with two-thirds devoted to protecting property, Police Chief Medaria Arradondo said. Police from surrounding cities and state and federal agencies, including the Department of Homeland Security, will also be posted, and the city has paired police with firefighters to rapidly respond if riots erupt.

“We as a city have to make sure we can distinguish between peaceful protesters and those that seek to cause destruction,” Mayor Jacob Frey said at a Thursday briefing. “I am very hopeful that the next few weeks will mark an important chapter for progress in our city, and of course for justice.”

Arradondo said the department was prepared to support “peaceful, civic demonstration” while guarding against “riotous behavior” — such as damaging buildings, throwing objects and marching on highways — that he said would “re-traumatize our city.”

“Last year, we were more reactionary,” Arradondo said at a Monday briefing. “This year, I think we’re on better footing.”

Community activists are concerned that the city is not ready. Michelle Gross, founder of the local nonprofit Communities United Against Police Brutality, said city officials have not contacted her group about preparations for the trial and focused instead on fortifying downtown.

“They are more afraid of the community than they are of police violence,” Gross said.

Gross held a briefing Friday with relatives of some of those fatally shot by police, unfurling a list of more than 400 people killed since 2000.

On Dec. 30, Minneapolis police reported their first fatal shooting by an officer since Floyd’s death. Dolal Idd, 23, was shot during a traffic stop on the city’s south side, a mile from where Floyd was killed. The police chief said Idd was armed and shot first, noting that a gun was recovered from the scene. Idd’s family has since questioned how police handled the shooting.

“Why they want to kill us? Why they want to terrorize us?” Idd’s father, Bayle Adod Gelle, a Somali immigrant, told protesters at the governor’s mansion on Saturday. “We need justice. This is our city, our country.”

In order for Chauvin to be found guilty of second-degree murder, prosecutors from the office of state Atty. Gen. Keith Ellison must prove he knowingly committed a felony — an assault on Floyd — that unintentionally caused his death.

On Friday, a state appeals court ordered Hennepin County Judge Peter Cahill to revisit his decision to drop a third-degree murder charge against Chauvin, which would require prosecutors to prove the officer acted dangerously and “without regard for human life.” A guilty verdict on that charge carries a sentence of up to 25 years.

Former Minneapolis Police Officer Mohamed Noor was convicted of third-degree murder in 2019 in the fatal shooting of Justine Damond after she called 911 to report a possible sexual assault near her home. Noor, the only police officer ever convicted of murder for an on-duty incident in Minnesota, was sentenced to more than a decade in prison.

Chauvin’s attorney, Eric Nelson, has argued in court filings that Chauvin used reasonable and authorized force when he knelt on Floyd’s neck and that Chauvin was simply doing his job in trying to restrain a suspect who was resisting arrest.

A court filing by prosecutors describes bystanders, including children, watching and pleading with Chauvin to stop as he “rolled his knee back and forth, pressing it into Floyd’s neck and maintaining pressure on Floyd’s breathing.”

Prosecutors also plan to introduce the other officers’ body camera footage in which Chauvin dismissed calls from the crowd to check whether Floyd was still breathing.

The U.S. Department of Justice is investigating Floyd’s death too. Federal civil rights prosecutions against law enforcement officers must prove that the defendant used unreasonable force and did so “willfully,” meaning they intended to violate someone’s protected constitutional rights.

Judge Cahill has announced pandemic-related rules limiting attendance at the trial to 30 people, including jurors, lawyers and one relative each of Chauvin and of Floyd. The attendance limit upset some of Floyd’s relatives.

“This has been a deeply painful and emotional year for every member of the Floyd family, many of whom intended to be in the courtroom to witness this trial,” family attorneys Benjamin Crump and Antonio Romanucci said in a statement. “The family is looking forward to the start of the trial as a critical milestone on the path to justice and a step toward closure in this dark chapter of their lives.”

Selwyn Jones, Floyd’s uncle, said he planned to travel from his home in South Dakota to Minneapolis this weekend to join protests outside the courthouse. He wants to see Chauvin convicted and sent to prison, because “he is guilty of destroying my nephew’s life.”

“If the right thing isn’t done, I’m afraid chaos will erupt,” said Jones, 55. “Every aspect of the trial, people are going to be waiting for something to happen.”

Near the intersection in central Minneapolis where police stopped Floyd, streets were nearly empty last week, memorials dog-eared. Several business owners reported being robbed in recent weeks, and residents said the sound of gunfire was common.

Mahmoud, 34, said she feels police abandoned the area last year after their local precinct building was burned by protesters following Floyd’s death. The Third Precinct remains closed. A Cub Foods grocery was vandalized and reopened only last month. Businesses all along nearby Lake Street are still recovering, and many remain boarded up.

Sitting in the kitchen of the house she bought seven years ago, Mahmoud said she plans to watch live coverage of the trial. She hopes Chauvin is convicted, which she believes would have a chilling effect on police brutality nationwide.

From the living room, her godmother, Sandy Robinson, 55, a retired county worker, warned of “a storm coming.” It’s been cold this winter, which has kept people inside, she said, but, “by the time they make a verdict, it will be warm again. And if they don’t get the right verdict, it will be worse than last time.”

“A lot is on the line,” Mahmoud said. “It’s justice for George Floyd, but it’s also justice for Black America.”

A block from where Floyd was killed, now known as George Floyd Square, business had slowed to a trickle at Finish Touch Boutique. Owner Willy Frazier was talking on the phone last week to an insurance adjuster, reporting how thieves broke into his store days earlier, stole Black Lives Matter shirt decals and jewelry and drove away in his Cadillac. He said the area has become a “dead zone” that police avoid. He worries what will happen once the trial starts.

“They’re saying they want to have a peaceful protest, but that’s hard,” Frazier said, especially if Chauvin is acquitted. “The wrong thing gets said, it becomes a riot. It’s getting rougher. Everyone’s like a ticking time bomb.”

On the city’s north side, City Councilman Phillipe Cunningham said neighbors were organizing to protect themselves as they did last spring and summer, when he said outsiders — including those flashing white supremacist hand signs — streamed into the area, threatening residents.

“I don’t want my community, my neighbors, having to put themselves at risk that way when we are investing a lot of taxpayer money in a system that’s supposed to be keeping us safe,” he said.

City Councilwoman Alondra Cano has been hearing from immigrant business owners on Lake Street, where buildings were destroyed by fires last year.

“They’re really worried that the area will burn down again,” she said. “Their focus is making sure no one destroys their legacy.”