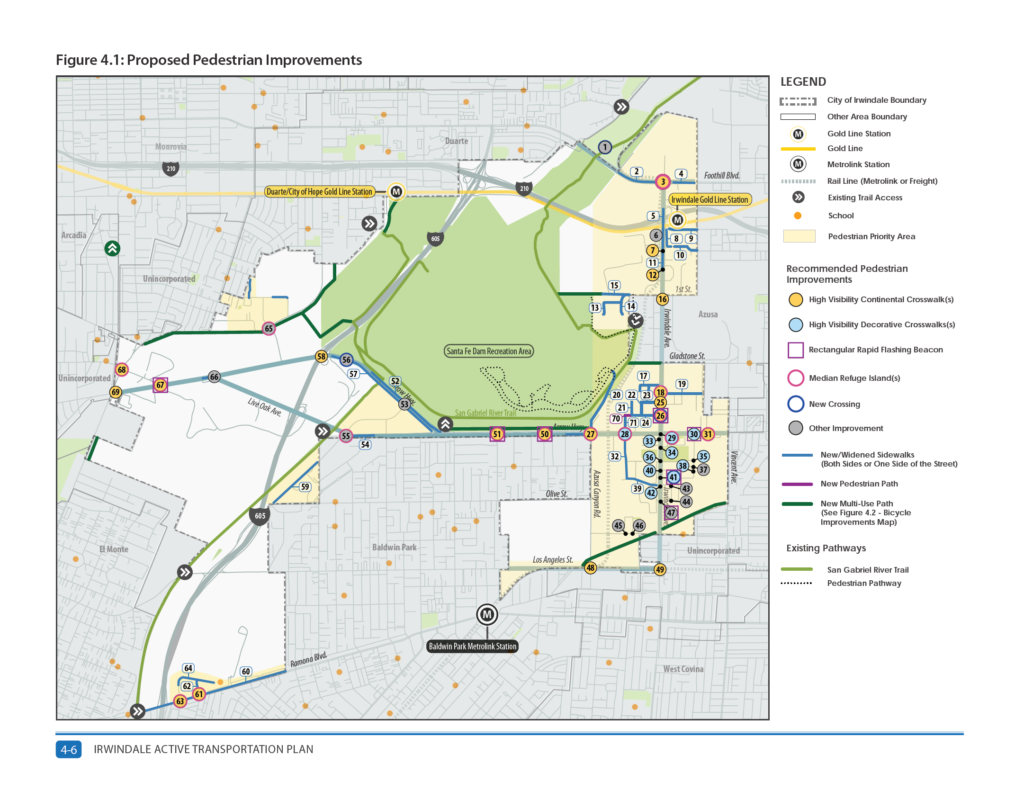 The city of Irwindale released its draft active transportation plan in January. The Irwindale City Council is expected to approve the plan this month. The plan proposes to create 71 pedestrian projects and 39 bicycle projects. A majority of the projects currently proposed are on the city’s main roads, including Arrow Highway, Irwindale Avenue, Azusa Canyon Road, Los Angeles Street, Live Oak Avenue and Ramona Boulevard. Currently the city’s only two bicycle facilities are the San Gabriel River Trail and a bike lane on Ramona Boulevard.

From the plan: “The Active Transportation Plan seeks to make walking and bicycling in the City of Irwindale safe, pleasant, and convenient for people of all ages and abilities. The Plan’s proposed pedestrian and bicycle network provides key connections for people living in, working in, and visiting Irwindale to regionally significant recreational and transit amenities. These connections will support and expand sustainable transportation options, simultaneously improving public health and maximizing available public infrastructure.”

Irwindale is a relatively small city with a population of 1,319 residents. It is bordered by Duarte, Azusa, Baldwin Park, Monrovia, Arcadia and El Monte. One-third of the city’s 9.5 square miles is made up of the Santa Fe Dam Recreation Area. The city has a long history of mining that continues to this day.

A high number of the city’s residents drive alone to work in comparison to surrounding cities, the county, and the state. While 21 percent of residents travel 60 minutes or more to work, 18 percent travel less than 10 minutes.

Three percent of employed residents walk to work, which is mostly the status quo among its neighboring cities, the county and state. Bicycling is not a popular activity for residents working in the city, with it being roughly zero percent of all trips made in the city.

According to 2011 to 2017 crash statistics reported in the Statewide Integrated Traffic Records System (SWITRS), there were 40 reported vehicle-bicyclist collisions in the city. One was fatal, nine resulted in serious injuries, and 30 had non-severe injuries. In that same period, 22 vehicle-pedestrian collisions were reported, which resulted in 6 pedestrian deaths, 16 injuries, 3 of whom were severely injured.

Staff at Placeworks, the consultant hired to develop the plan, determined that the largest contiguous pedestrian priority area in Irwindale is located east of Azusa Canyon Road to the city’s eastern boundary, encompassing the Irwindale Avenue corridor. Other priority areas include streets containing residential and industry just south of the city of Duarte border along Meridian Street, Ramona Boulevard adjacent to the city of Baldwin Park, east of the 605 Freeway next to Rivergrade Road, and Los Angeles Street leading to the Baldwin Park Metrolink Station.

For questions or comments about the plan, contact Marilyn Simpson at the city of Irwindale at (626) 430-2209 or msimpson@IrwindaleCA.gov.