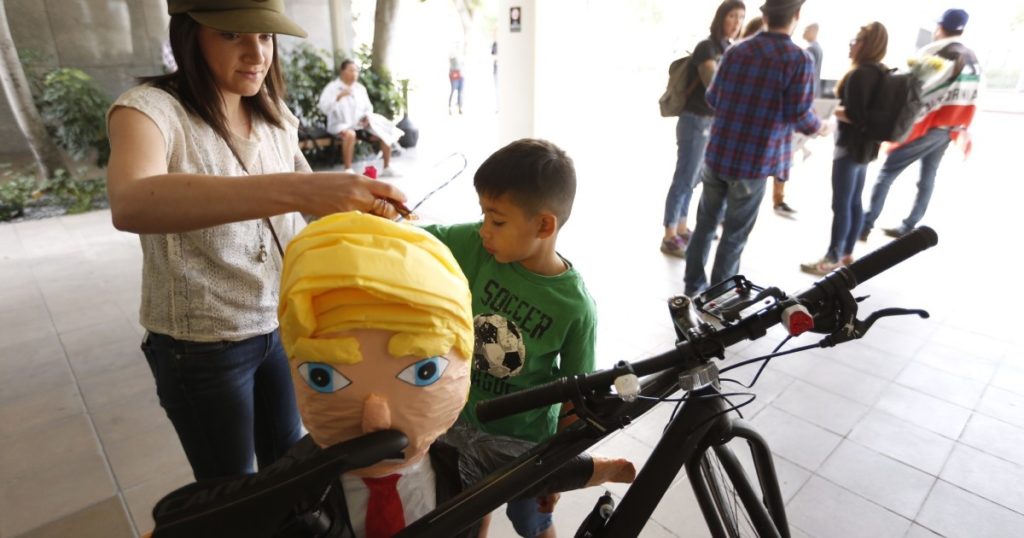 My Inauguration Day celebration was supposed to be simple and symbolic: Dump the memory of the Donald J. Trump years into the garbage can.

By finally throwing away his piñata head.

It was the last remnant of one I had bought the summer of 2016, when Trump piñatas blossomed everywhere from backyard parties to political rallies. A former intern of mine had flaunted the plaything during a protest when the then-presidential candidate appeared at the Anaheim Convention Center.

Everything went as we thought it would: Trump supporters alternately cursed out the intern or tried to grab the piñata. Trump opponents tore it apart to get the candy inside. And the most predictable part: After someone placed the now-empty head on a stick alongside the Mexican flag, conservative commentators and mainstream media alike decried what had happened as a beheading, a decapitation, a lynching and other over-the-top terms.

My dudes: It was a piñata. Obliteration in the name of human joy is the fate of their species, whether it’s a SpongeBob SquarePants, a Wonder Woman or the crybaby in chief.

Back then, the Trump mobs merely screamed at opponents instead of invading the U.S. Capitol in the name of their hero. But let’s not pretend those days were somehow gentler. Twitter, Facebook, Instagram and YouTube were even more poisonous then than today; Silicon Valley tycoons tolerated hate groups and wild conspiracies in the name of the 1st Amendment and billions of dollars in profits. The recent insurrection put an end to their excuses, to the point where Trump is now banned from all the major social media sites.

About time. Which brings me back to my piñata.

I kept the ersatz Trump noggin as a reminder of the day and a testament to how American culture still didn’t get Mexicans. But I hadn’t thought about it in years until I figured I should post something clever on Instagram to mark President Biden’s swearing-in ceremony. So after his inauguration speech went off without a problem, I dug through my attic and dusted off the piñata head.

After a couple of false starts, I uploaded a wordless seven-second video to Instagram. The mise-en-scene was Scorsese via Buster Keaton: Trump’s mock mug filled the screen for a second before it fell into a waste bin. It bounced once before settling in. I waved adios, then flashed a peace sign — in the name of national reconciliation, of course.

Comments by followers — overwhelmingly positive, with a couple of dissenters — followed. But about an hour later, Instagram took down the video. A message claimed I had violated “community guidelines” against sharing violent images. Nearly three weeks later, I’m still not allowed to use its live-broadcast feature.

All over a piñata head.

I’ve lodged an appeal with the Oversight Board, the mysterious panel that Facebook (Instagram’s parent company) has created to, in its own description, help “answer some of the most difficult questions around freedom of expression online: what to take down, what to leave up, and why.”

My complaint doesn’t cry censorship like my fellow scofflaw Trump, who’s currently suspended from both Facebook and Instagram for his river of lies and incitements. Social media giants can take down and ban whatever and whomever they want because they’re private corporations. (Though it’s telling that it took four years of Trump’s dangerous falsehoods for these companies to hold him accountable).

The Oversight Board doesn’t talk to the media, nor will it let me know whether it will take up my appeal. I harbor no illusions that it will, given I’m one of over 150,000 cases before the board. If Instagram chooses to limit my account forever, so be it — I’ll just take my live act to Pershing Square on Saturday mornings like so many blabbermouths before me.

So I filed an appeal not for me, but in the name of piñatas.

Because they don’t deserve this disrespect.

“Freud always said that sometimes a cigar just is a cigar, but Mexicans don’t get that pass with piñatas, do we?” said San Diego State English professor William Nericcio when I told him about my ordeal. He studies how Americans have depicted Mexicans over 200 years. “Even though our use of piñatas is that of celebration and laughter, Instagram just had to reduce them to some commentary about the inherent savagery within Mexicans.”

Yesenia Prieto and Mia Baez, co-owners of Piñata Design Studio in Covina, went through their own recent internet piñata persecution as well. Last year, they sold some coronavirus-inspired ones on Etsy as “a cute cathartic silly thing,” Prieto said. “We thought, like, ‘Beat COVID.’”

Etsy flagged Piñata Design Studio’s account for selling insensitive material and forced them to take down their custom coronavirus craftwork under penalty of deplatforming.

“There is such a lack of history and representation in our industry,” said Prieto, who still sells Trump piñatas in both human and infant versions. “They’re too often misrepresented and misunderstood.”

“There’s nothing violent about them — nothing,” added Baez. “Everyone’s happy and taking care of each other when one’s around. Especially when someone’s swinging a piñata stick.”

My Trump piñata head was not a case of Kathy Griffin holding a bloody, lifelike Trump mask that looked so real that his son Barron reportedly believed it was his father. Nor was it a case of me hanging or burning it in effigy.

My Trump piñata head looked like, well, a piñata.

Its eyelids were painted on with a Sharpie, just like the snarling mouth and teeth. Trump’s blond “hair” was crepe paper, along with his “face,” which was pink — when the entire world knows Trump’s skin is as orange as a mandarin. Strips of old newspapers hardened with paste — the inner layer of every piñata — were visible. That’s it.

The piñata’s cartoonish quality wasn’t enough to pass Instagram’s no-violence litmus test. But you know what did? A photo that remains on my page of a Los Angeles mural that depicts Dora the Explorer impaling Trump with a corn on the cob. Even a picture of me holding the very Trump piñata head that currently put me in the digital hoosegow.

Those were taken years ago, though.

“We’re seeing this sensitivity for the first time,” said Prieto, a 31-year-old third-generation piñata maker. “The aura of the environment has shifted. Things got more political and heated. And it’s sad. Piñatas should be not be demonized for being satirical art. They’re now getting the short end of the stick.”

Nericcio agrees. He had to fight to place a Trump piñata in the San Diego State library as part of an exhibit because “the librarians were very wary and fearful” that someone might deface it.

“Nothing happened — the students knew what it was,” he said. “It’s parody. But gatekeepers of ‘proper’ culture don’t get that. Your video triggered the memory of a lawyer not wanting to get sued. It’s corporate America covering its ass.”

My Instagram imbroglio did make me do something to spite them that I never thought to do again: buy a Trump piñata.

I went to Alva’s Dulceria, a Mexican party-supply store in Santa Ana that used to hang Trump piñatas outside its storefront all the time because they were so popular. There was but one when I visited, squeezed in between a Pikachu and a brigade of Minions toward the back of the store.

I guess I better keep piñata Trump somewhere really safe. God forbid someone treats the piñata like a piñata.