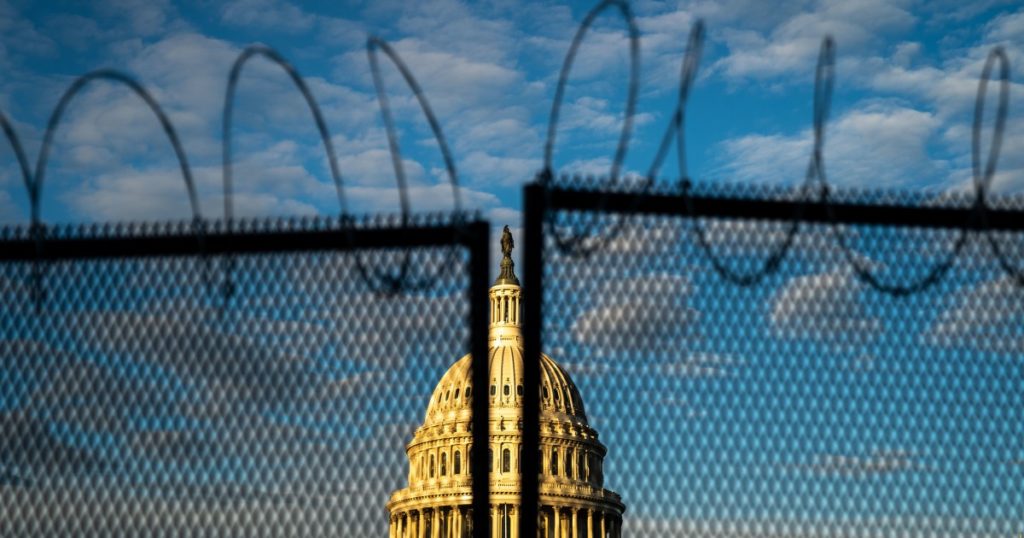 When Lisa Benton-Short biked to work, before the coronavirus forced her to teach from home, she always tried to cross the National Mall near the Washington Monument.

The path curves upward toward the base of the obelisk, and at the crest she can see the anchors of American democracy in almost all directions — the U.S. Capitol to the east, the Lincoln Memorial to the west and the White House to the north. The monument itself appears impossibly tall, dwarfing the flagpoles that encircle it.

“It’s soaring,” she said. “It always makes me feel optimistic.”

Now those rides are impossible, barred by metal fencing stretching around the National Mall and troops with rifles standing guard. The security perimeter extends throughout downtown, where once-busy streets dead-end into military checkpoints, and some bridges into the city have been shut down.

Not since Abraham Lincoln’s first inauguration in 1861, on the eve of the Civil War, has a new president taken the oath of office under such a dark cloud of fear and uncertainty about the nation’s democratic experiment. With the coronavirus ripping through communities around the country and domestic terrorists threatening to attack, Washington is preparing for Joe Biden’s inauguration on Wednesday under what feels like wartime conditions.

“We definitely do look like we’re at war,” Benton-Short said. “But we’re at war with ourselves.”

Inaugurations are always high-security events, but there’s usually a jubilant atmosphere. Every four years is like a constitutional Mardi Gras, with fewer beads and more American flags. Schools and work let out. Spectators crowd as close as they can to the west side of the Capitol to glimpse the inaugural ceremony, or they jockey for spots along the parade route, hoping to catch a glimpse of that iconic moment when the president and first lady exit their armored limousine to walk down the center of Pennsylvania Avenue.

At night, there are parties across the city, and the well-connected mingle at inaugural balls in their tuxedos and evening gowns.

Little of that would have been possible this year during the pandemic, and Biden had already canceled many of the traditional indoor events that could become vectors for disease. But the Jan. 6 siege of the U.S. Capitol, which forced Congress into hiding as President Trump’s supporters stormed the building, has transformed the city into a garrison. Federal authorities are scrambling to arrest the rioters — capturing nearly 100 as of Friday — and deter future violence, warning that they expect more attacks in the months ahead.

The lockdown is painful for Benton-Short, 56, a George Washington University geography professor who specializes in the importance of public spaces and authored a book about the National Mall.

“To see these things behind fences — or to not be able to see them at all — it’s a loss of important symbols that define us as Americans,” she said.

For her and other longtime residents proud of their city’s landmarks, the monuments and neoclassical buildings appear diminished when they can only be spied from a distance.

Instead of piercing the blue sky, the Washington Monument gently pokes its head above downtown offices. The Lincoln Memorial shrinks into a shoebox diorama hiding a statue of the 16th president. The U.S. Capitol dome, vast and majestic when standing at the base of the building, looks like the top of a fire hydrant. The White House can barely be seen at all, lost in a maze of security checkpoints.

The National Mall, all 146 acres, is empty and barricaded. For generations it’s been a blank canvas where Americans can celebrate and protest their country, or a neighborhood park where D.C. residents can toss a Frisbee, play softball or enjoy a picnic.

Now it’s more like a wall stretching east to west, bifurcating the northern and southern parts of Washington. The Secret Service, which is leading security efforts for the inauguration, has cordoned off what it calls the “red zone” and the “green zone,” echoing the language of Baghdad where American personnel remained behind blast walls to protect themselves from insurgents.

Although life in the city’s surrounding neighborhoods is largely uninterrupted, downtown is at a standstill with many businesses closed and boarded up with plywood.

Leslie Sowers, 45, stood in the center of an intersection and pointed her phone’s camera down barren streets.

When President Obama was inaugurated for the first time, Sowers and her friends started celebrating early with mimosas and cupcakes. They spent their days wandering the memorials on the National Mall and ducking in and out of restaurants.

“It’s part of why you want to live here,” Sowers said.

Rochelle Smetherham, 46, drove down from New Jersey with her husband for Martin Luther King Jr. weekend, but they couldn’t reach the monument to the civil rights leader located near the southwest corner of the mall.

“I’ve never seen so much fencing,” said her husband, Douglas, 48.

So they kept walking along the perimeter.

Susana Quinonez, 62, tried to point her camera through gaps in the metal barrier. She usually wanders through the park twice a week, snapping photos of the various memorials and monuments along the way, but that’s impossible now.

An immigrant from Peru who works at Georgetown University, Quinonez remembers being euphoric when first gazing down from the steps of the Lincoln Memorial years ago. “Oh my God,” she thought to herself, “I’m here, I’m here.”

Now the city reminds her of the political unrest that drove her to leave her homeland.

“I just can’t believe it’s happening here,” she said. “It’s very sad to see all this.”

Washington has faced more than its share of unrest and disaster. Homes and businesses were destroyed by rioting after King was assassinated in 1968. Terrorists flew an airliner into the Pentagon across the river in Arlington, Va., on Sept. 11, 2001, and a second plane might have been aimed at the Capitol building if passengers hadn’t forced a crash landing in Pennsylvania. Just last year, racial justice protests crisscrossed the city and sparked a militarized response from police.

But the current crisis has left Washington on edge in a new way. Trump pushed the country’s democracy to the breaking point, angry city residents said in interviews, feeding his supporters a steady stream of lies about a stolen election. Even now, on the eve of Biden’s inauguration, some refuse to accept him as a legitimate president.

Nara Rodrigues, 32, works in corporate insurance and she said the cost to insure property damage from terrorism has been rising. As she headed to a coffee shop with her husband, she worried that securing this week’s inauguration won’t be the end of the threat.

“I just get concerned that there are going to be attacks throughout the year,” she said. “You have little pockets of people who have become radicalized.”

Walking his black poodle along the security fence outside the Supreme Court, Bill Manville watched a team of National Guard troops march down the street and a solitary man shout conspiracy theories about dead people voting.

“Everything is frightening now,” he said. “I’ve lived here all my life. I’ve never seen anything like this.”

Manville, 83, bumped into a family friend who planned to send her children away for the inauguration just in case there was more violence. She told Manville he could use her family’s beach house in Delaware if he wanted to leave too.

He declined, confident that he’ll be safe even though he lives a few blocks from the Capitol building. He just wishes the inauguration was more like the ones he attended while growing up, when the biggest concern was the potential for bitter cold.