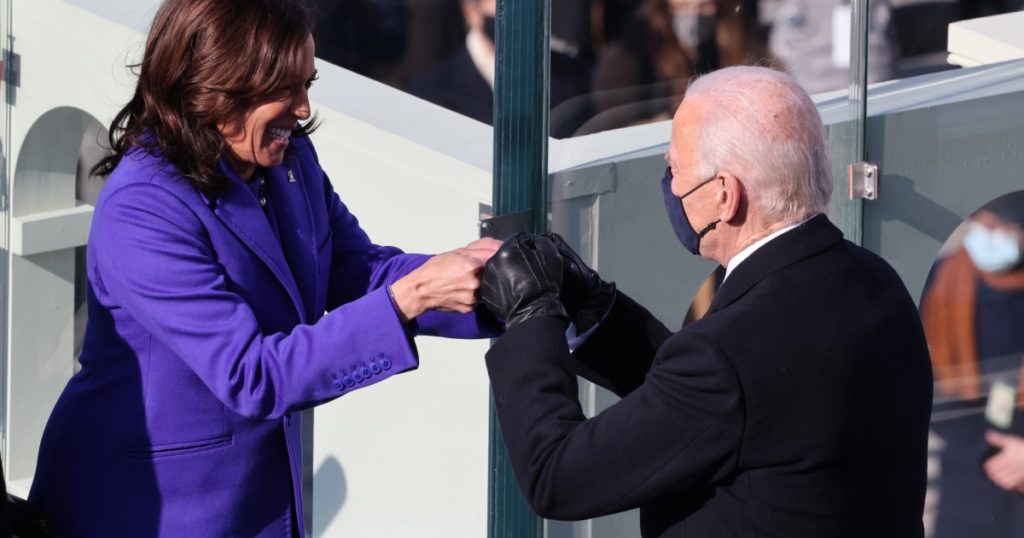 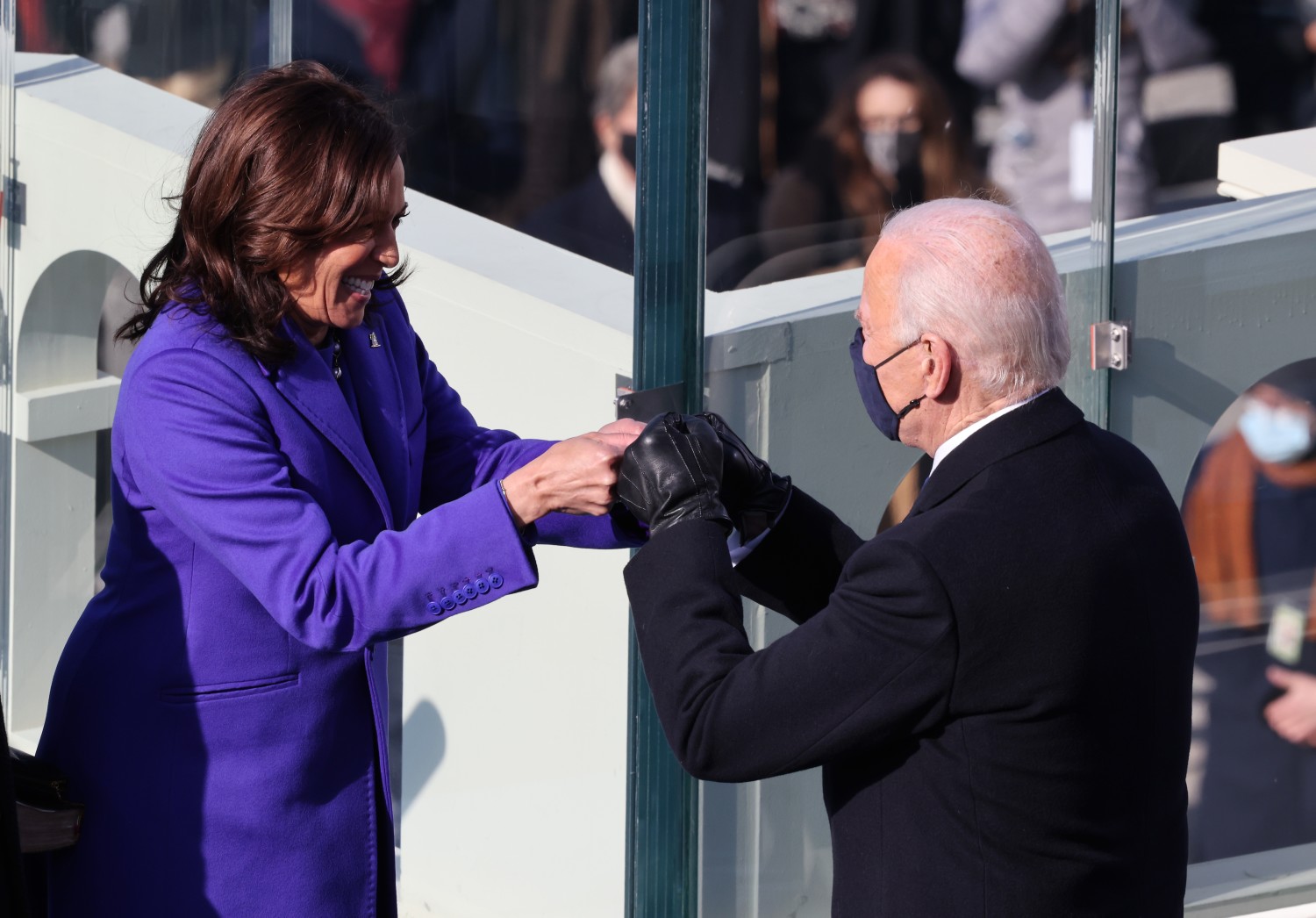 “Democracy has prevailed,” President Biden proclaimed Wednesday on the steps of the U.S. Capitol, where just two weeks ago a violent mob of his predecessor’s supporters attempted to force the nation in a markedly different direction.

Redemption and reclamation were the themes of the televised and livestreamed inauguration of the 46th president of the United States and the 49th vice president, Kamala Harris. Their very presence, along with a much smaller than usual crowd of invited guests, former presidents and congresspeople, made the point that democracy had prevailed despite the challenges of the past four years, culminating in the Capitol insurrection of Jan. 6.

Gone were the noose that rioters erected in the building’s shadow and the Confederate flag paraded through the Union’s most hallowed halls. In their place was a return to civility, order and protocol — and the guarded hope that America will finally stop eating itself alive.

Conventional wisdom about inauguration ceremonies — that they are routine because they happen every four years, and that they are remarkable for the very same reason — rang true, even as circumstances, from the scourge of COVID-19 to the threat of more violence, led the 59th installment of this grand American tradition to be pared down to essentials. On a chilly day with the occasional flurry of snowflakes, many finally found the chance to exhale, and to mourn the victims of the pandemic, inside of that relative quiet.

“Somehow we’ve weathered and witnessed a nation that isn’t broken, but simply unfinished,” said Los Angeles native Amanda Gorman, 22, whose inaugural poem “The Hill We Climb” embodied the changing of the guard, and the reflective mood, with its words about resilience and opportunity. “We, the successors of a country and a time where a skinny Black girl descended from slaves and raised by a single mother can dream of becoming president only to find herself reciting for one.”

And as a trio of former presidents from both parties stood, in unity, to witness the transfer of power, the view was dappled with bipartisan purple — the color chosen by Harris, former Secretary of State Hillary Clinton, and former first ladies Laura Bush and Michelle Obama, whose long coat and gold belt gave her the appearance of a superhero.

In Harris’s case, it was also a tribute to Shirley Chisholm, the first Black presidential candidate from one of the two major parties. Like Chisholm when she became the first Black woman elected to congress in 1969 and later launched a campaign for the Democratic presidential nomination, Harris made history Wednesday when she was sworn in as the first woman and person of color to become vice president.

The gravity of the moment was underscored further by the presence of Eugene Goodman, the Capitol Police officer who almost surely saved the lives of elected officials — and risked his own — by leading rioters, among them white supremacists, away from the Senate chamber during the Jan. 6 breach. Goodman, who is Black, escorted Harris to her seat; the first Latina Supreme Court justice, Sonia Sotomayor, administered Harris the oath of office.

Such moments added to the poignant nature of the ceremony, which represented both historical change and a potential return to normalcy, striking a deft balance between turning the page, dealing with today’s challenges and reckoning with our past.

“Let’s start afresh, all of us,” Biden implored during his inaugural address, in which he also pledged to defeat “political extremism, white supremacy [and] domestic terrorism.” “Politics doesn’t have to be a raging fire, destroying everything in its path. Every disagreement doesn’t need to be a total war.”

His message was bolstered by a ceremony that wove together the traditional and the new: Lady Gaga sang the national anthem in a billowing red skirt and blonde Greta braids; Jennifer Lopez, dressed in the crisp, clean white of a fresh start, belted out a medley of “This Land Is Your Land” and “America the Beautiful,” replete with a message in Spanish and the urge to “Get loud.”

And then there was the glaring absence of former President Trump, who fled the capital for Mar-A-Lago rather than admit he’d lost the election and his hold on the White House. Instead, it was left to Former Vice President Mike Pence to show up in a demonstration of basic decency, while now-Senate Minority Leader Mitch McConnell — who only recently began to come out more forcefully against baseless claims of election fraud — later addressed Biden in a particularly awkward moment while he and House Speaker Nancy Pelosi gifted the new president and vice president a pair of U.S. flags.

The hopes projected by the event for a less rancorous future were not exactly reflected by the Senate either, which has displayed a distinct lead-footedness in considering Biden’s cabinet nominees. But who really expected four years of stalemate and white-hot hatred to change overnight?

On other fronts, though, it was clear that things had shifted quite dramatically.

The National Mall featured 200,000 flags in place of those who could not attend the ceremony because of pandemic restrictions and tightened security, and on Tuesday evening 400 lights illuminated the Lincoln Memorial Reflecting Pool to honor the 400,000 who have died in the U.S. from the coronavirus. And Biden’s self-described first “act as president” was asking for a moment of silent prayer for those lost to COVID-19, their loved ones, “and for our country.”

Those attending the inauguration — speakers and Sens. Amy Klobuchar and Roy Blunt, Supreme Court Justice Amy Coney Barrett and future Transportation Secretary “Mayor Pete” Buttigieg among them — all wore masks while looking on, and the lectern was wiped clean between each speaker.

CNN’s Jake Tapper punctuated the point as the incoming first family made their way into the White House, finding it necessary to tell his viewers that the building had been fully sanitized for their arrival. He knew some might be worried, given the former occupant’s flagrant disregard for COVID-19 protocols.

Like the striking image of Harris walking with the nation’s first second gentleman, Doug Emhoff, on her arm, Tapper sounded a note of subtly radical change amid the restoration of dignity and calm. As Biden said to open his speech, it was “democracy’s day” through and through.