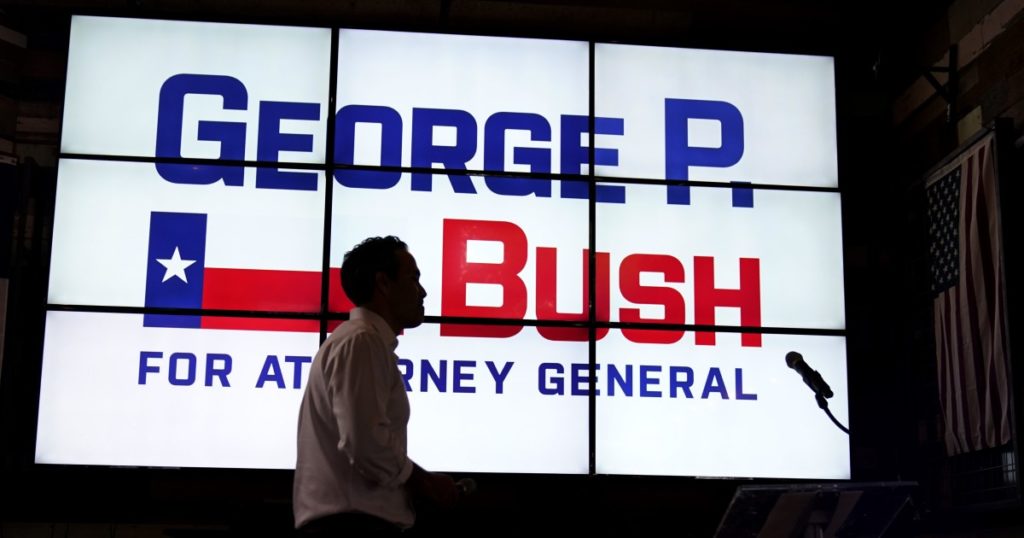 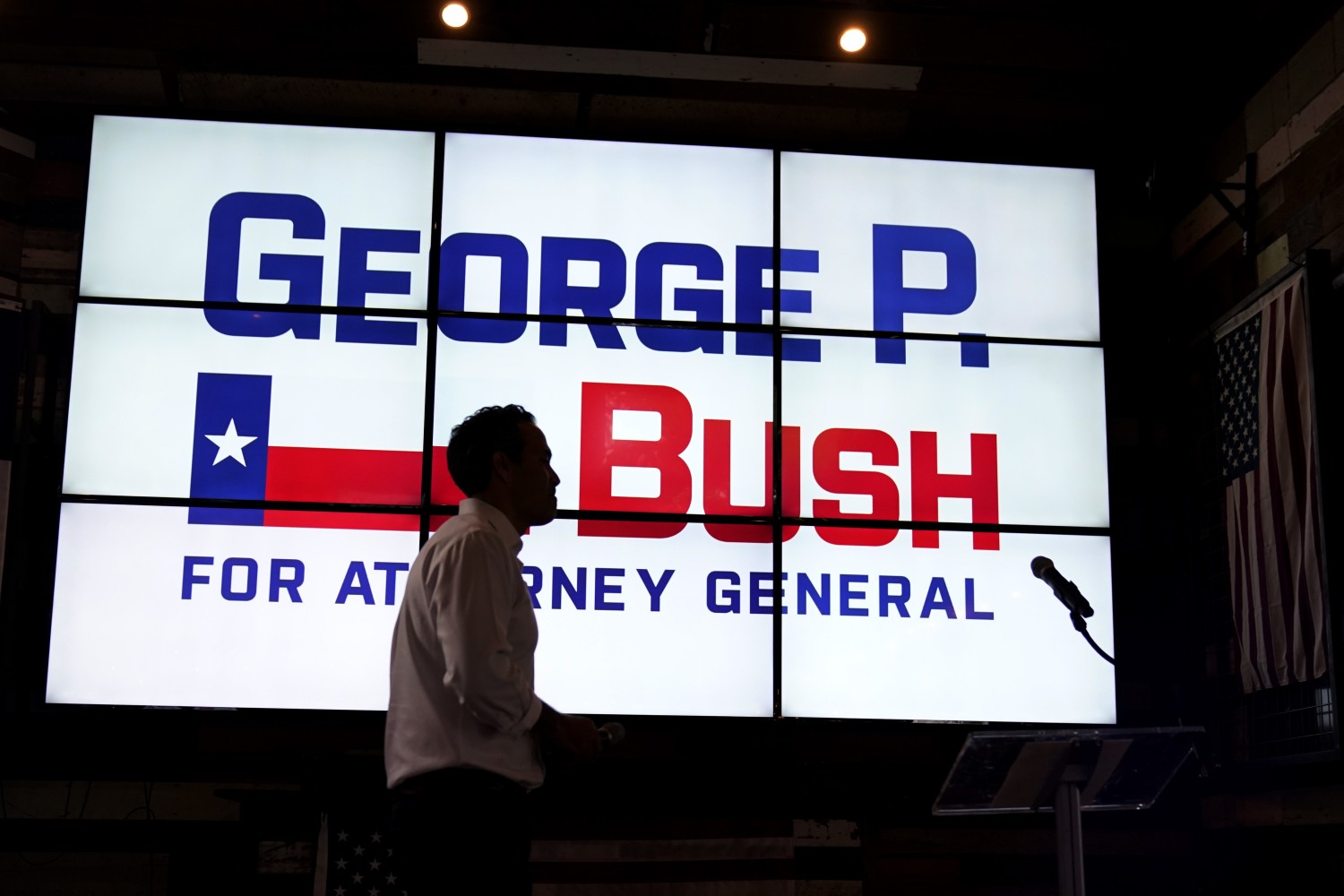 “We need an attorney general that’s above reproach,” Bush said in a swipe at the GOP incumbent, Ken Paxton. “Not under criminal indictment for securities fraud and under FBI investigation for bribery and corruption.”

Here are a few hints: His great-grandfather was a U.S. senator. His grandpa and uncle were presidents of the United States, Nos. 41 and 43, respectively. His father was governor of Florida and in 2016 became the third member of the Bush clan to seek the White House.

But you wouldn’t know any of that from George P. Bush’s announcement speech, or the video accompanying his campaign launch. It’s evident, though, he has a major crush on Donald Trump.

In fact, in a 10-minute address that name-checked virtually every president since Gerald Ford, the only mention that Bush made of his famous family was to say he was the only one who endorsed Trump after he ridiculed and gleefully humiliated his father, Jeb, en route to the GOP nomination. Trump also insulted Bush’s mother, Columba, who was born in Mexico.

The former-president-not-named-Bush appears several times in George P.’s launch video, which includes a Trumpian vow to “drain the swamp” in both the state capital of Austin and in Washington, D.C., even though the latter lies 1,500 miles away from Texas. You can’t say the 45-year-old political scion lacks for ambition.

There’s a bit of a tradition in Texas, heaving one’s family under the bus in service to Trump. The state’s junior U.S. senator, Ted Cruz, was a fierce Trump critic in 2016 when the two battled in the GOP primaries, calling him “utterly amoral” and a “pathological liar.” Cruz then went on to be one of Trump’s most fervent loyalists, even after he linked Cruz’s father to the assassination of John F. Kennedy and belittled the looks of the senator’s wife, Heidi.

Elections are, of course, about winning and in that way Bush’s fealty to Trump makes perfect sense, even if some consider the erasure of his family unseemly. “An anti-Trump Republican winning a Republican primary is about as likely as a pro-Trump Democrat winning a Democratic primary,” said Matthew Dowd, who was chief strategist for George W. Bush’s 2004 reelection campaign but has since departed the GOP.

Bush is perhaps best known in Texas for a dust-up over renovation of the Alamo, that most sainted of Texas shrines. The costly project has been enmeshed in a heated debate over how best to tell the story of the 1836 battle near the present-day city of San Antonio, leading the state’s lieutenant governor, Dan Patrick, to threaten to remove oversight from Bush’s General Land Office.

The two managed to square things away, however, and avoided a further collision when Bush signaled his intention to run for attorney general and not challenge Patrick’s bid for a third term in 2022.

For his part, Atty. Gen. Paxton may have set some kind of modern-day record by serving most of his time as Texas’ chief law enforcement officer while under indictment on charges of securities fraud. The FBI is also probing allegations by former aides that Paxton abused his office to benefit a wealthy donor. Paxton called the charges “an unsubstantiated smear campaign.”

Taking aim at Bush, he suggested his rival is running for attorney general merely to position himself for an inevitable run at the White House. “Texans know Attorney General Paxton’s rock-solid conservative record,” a spokesman said after Bush entered the race. “Ken Paxton has been and will continue to be the tip of the spear in protecting President Trump’s America First principles.”

It will be hard for Bush to out-Trump Paxton, who demonstrated his allegiance to Trump by going to the U.S. Supreme Court and filing a meritless lawsuit seeking to overturn Joe Biden’s November victories in four states. None of them was Texas, which Trump carried. The high court brushed aside the suit without a hearing.

Still, Bush is doing his best to out-Trump him. He teased his announcement with tweets vowing to “restore Trump-era immigration policies” and gushing over a “great” conversation with the ex-president about the future of Texas and their alliance going forward. (Trump, though, has yet to make an endorsement.)

The attorney general’s race promises to be fierce, and nasty. Despite his legal difficulties Paxton remains a formidable candidate for reelection, in part because some conservative Republicans associate the Bush name with a kind of moderation — relatively speaking — that has fallen from political fashion. Those with long enough memories remember how George W. Bush, a former Texas governor and George P.’s uncle, worked closely with Democrats on, among other things, an overhaul of the state’s education system.

Some voters may question Bush’s character and integrity for ditching his family and wedding himself to their nemesis, but Wayne Slater doesn’t see that being a problem inside the Bush clan.

“They support George P. as part of the family business and understand he needs to do whatever he needs to do, including cozying up to Donald Trump,” said Slater, who spent 30 years covering Texas politics for the Dallas Morning News.

A onetime political advisor who remains close to the Bushes agreed. “Blood is very thick in that family,” said the Texas Republican, who asked not to be named because he is not an authorized spokesman. “I doubt there’s even a moment when they think he’s being disloyal.”

George P. Bush suggested as much, telling Fox News, “Dad gets it” and suggesting “a few Bushes” might even join him at some point on the campaign trail.

Maybe in disguise, hidden beneath a Trump 2024 banner.