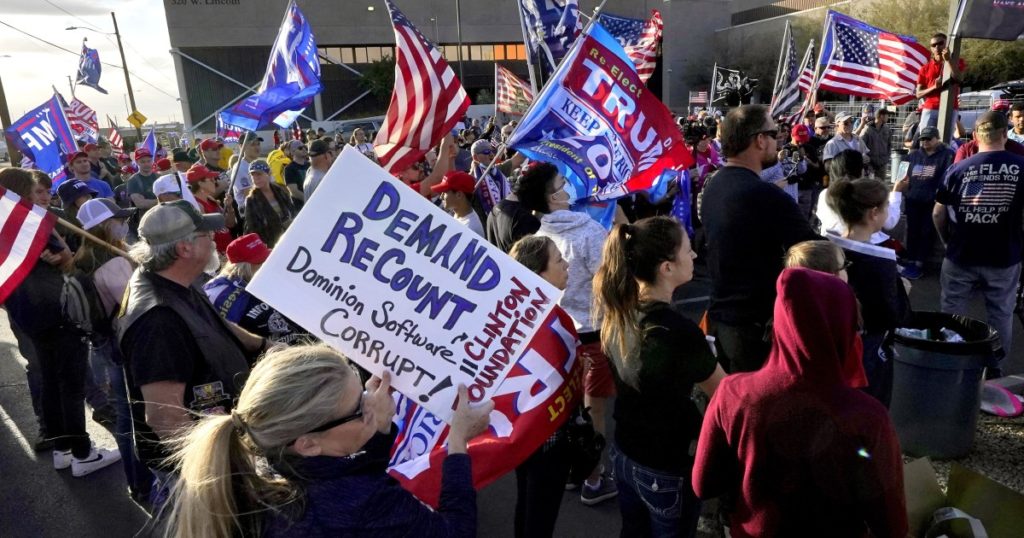 The national battle over voting restrictions was, for one sluggish February afternoon, waged in a cramped hearing room of Arizona’s House of Representatives. Separated by plexiglass barriers, Republican lawmakers steadily plowed ahead on bills that, put together, could make it harder for Arizonans to vote.

Members of a House committee advanced a proposal to forbid the use of private money to help conduct elections, such as by buying equipment or funding voter education. They approved a bill making it a felony for an official to change any election-related date set in statute. They OKd a measure to preemptively forbid same-day voter registration, which the state does not currently offer.

Each bill was portrayed by its proponents as a commonsense housekeeping measure to guard against wrongdoing, or even the perception of it. Voting rights advocates see a broader — and more damaging — agenda.

“If you look at one of them, it may not seem that big a deal, but there’s 50 or more of them,” Alex Gulotta, Arizona state director of All Voting is Local, said in an interview. “They all add up to changing our election system in substantial ways to basically respond to the ‘Big Lie’” — that last year’s presidential election was stolen from former President Trump.

Similar scenes are playing out in statehouses across the country, with a barrage of voting restriction measures snaking through the legislative process.

Leading the way is Arizona, which has seen dozens of bills introduced this year, the most of any state, according to the Brennan Center for Justice, a think tank at New York University Law School.

“There are legitimate concerns,” said GOP state Rep. John Kavanagh, chair of the Arizona House’s Government and Elections Committee, “and we’re addressing them.”

Republicans championing these bills say they are necessary to restore faith in a system now widely seen by their constituents as suspect. Democrats counter that the GOP is capitalizing on distrust they had fostered themselves.

One point of agreement across the political spectrum is that the state-level focus on voting procedures has reached unprecedented heights, with more than 165 bills nationwide to restrict voting, according to the Brennan Center analysis. Many also agree that this showdown is the inevitable result of last year’s presidential election, which Trump has falsely described as rife with fraud.

“If 2020 was the year that the Republican Party decided to try to use the courts to shut down voting rights, 2021 will be the one they are going to try to use the legislatures to do the same thing,” said Marc Elias, a Washington-based attorney who has become Democrats’ go-to elections lawyer.

The phenomenon spans time zones. In Georgia, for example, Republican lawmakers want to impose strict requirements for absentee voting and eliminate early voting on Sundays, curbing the “Souls to the Polls” initiatives popular with Black churchgoers. Iowa legislators are fast-tracking legislation that would shorten early voting periods and close polls one hour earlier on election day.

The glut of bills in Arizona reflects not only the state’s dental-floss-thin margin in the 2020 presidential race, in which Democrat Joe Biden beat Trump by 10,457 votes, but also longer-term political changes that transformed a GOP stronghold into a swing state.

Arizona “is a state on the front lines of a demographic shift,” said Eliza Sweren-Becker of the Brennan Center. “That is inseparable from efforts to restrict access to ballot.”

After Nov. 3, Arizona was one of the handful of battleground states where Trump disputed the results. His allies filed eight lawsuits alleging fraud; with no evidence to back up the assertions, they lost all eight.

When GOP Gov. Doug Ducey certified the vote, making Biden’s win there official, the backlash from his party was swift and severe. (Ducey has not taken a public position on the pending voting legislation.)

Trump’s fixation on wrongdoing has made voter fraud a top priority despite his lack of evidence, not just for party strategists and election wonks, but for the Republican electorate. A January poll found that 54% of GOP voters in Arizona believe the election was stolen.

“All of the election integrity challenges, the headlines and everything else — it did not match reality, but the damage is done on public opinion,” pollster Mike Noble said.

GOP legislators agree that concerns over election integrity have become a litmus test for their base, much like hot-button issues such as immigration and taxes.

“When you have this many constituents that are emailing us and calling us and demanding that their questions be answered, it always should be a top priority,” she said. “If that’s what’s important to our voters, we take care of it.”

That reasoning is met with a heavy dose of skepticism from Democrats, who see this as a feedback loop actively nurtured by the GOP not forcefully acknowledging the lack of fraud.

“They’re fixing a problem that they know does not exist,” Democratic state Sen. Martin Quezada said.

“If legislation comes out that’s detrimental to our voters, we’re going to oppose it very strongly,” Hoffman said. “Some of the laws that they have come out with are absolutely unworkable.”

Those measures include a bill to let the Legislature choose its own slate of presidential electors and effectively overrule election results. One would have gutted mail voting by requiring all ballots to be returned in person; another would require mail votes to be notarized. All three have generated headlines but little else; none has had a single committee hearing.

“The outrageous bills don’t have the votes, and they’re screened out for that reason,” said Kavanagh, the GOP representative.

Kavanagh blamed the media for focusing on the most radical bills, but also vented frustration with GOP colleagues who force him to be a gatekeeper.

“I hold the bill which I know hasn’t got any chance of getting through the system, much less not surviving the governor’s veto, and I’ll be blamed by my base, because I’m now disloyal,” he said.

That dilemma gets little sympathy from Democrats.

“Those more extreme bills tend to suck the oxygen out of the room, allowing the less contentious issues to quietly sneak through,” said Democratic Secretary of State Katie Hobbs.

GOP state Sen. Michelle Ugenti-Rita doesn’t think her bill is controversial. She simply wants to make sure ballots aren’t automatically mailed to those on the permanent early voting list who may have died or moved. Under her proposal, voters would be removed from the list if they hadn’t cast a ballot in the last four statewide elections, both primary and general.

She described the bill as a measure to guard against potential fraud, as opposed to responding to specific wrongdoing.

“A reasonable person could understand that having live unvoted ballots floating out in the community could open up a situation where there’s undue influence, potential interference, and in the worst case, fraud.” she said.

Voting rights groups said the greater harm would be to voters booted off the list for choosing not to participate in two election cycles.

Randy Perez of LUCHA Arizona, a grass-roots group, estimated that if the bill were enacted, over 100,000 voters would not be automatically mailed ballots in the 2022 election.

The bill, which had been introduced in past years, came up for a vote in the state Senate this month. A lone Republican, Paul Boyer, voted no, and the legislation appeared dead.

It was the second time this month that Boyer had bucked his party on voting issues. The week before, he had voted against a measure to hold the GOP-dominated Maricopa County Board of Supervisors in contempt for not complying with a Senate subpoena for information for a forensic audit.

The board had already completed several reviews, but Fann, the Senate GOP leader, said the extra scrutiny was necessary to address lingering doubts. (Two additional audits released this week by the county also found no problems.)

Boyer said he too thinks an audit is merited. But he agreed with the supervisors that they were legally prohibited from turning over the data. The response to his no vote was so ferocious that his family fled their home temporarily.

With Boyer’s vote against Ugenti-Rita’s measure, voting rights advocates were invigorated by the sense that, despite the partisan odds stacked against them, they may be able to beat back the onslaught of bills.

But in statehouses, no legislation is truly dead until the end of session.

Just a week after Ugenti-Rita’s bill was stopped on the Senate floor, she used a legislative maneuver to reintroduce it.

Gulotta, the voting rights activist, likened the proposal to a zombie that kept coming back to life.

On a party-line vote, the bill advanced.