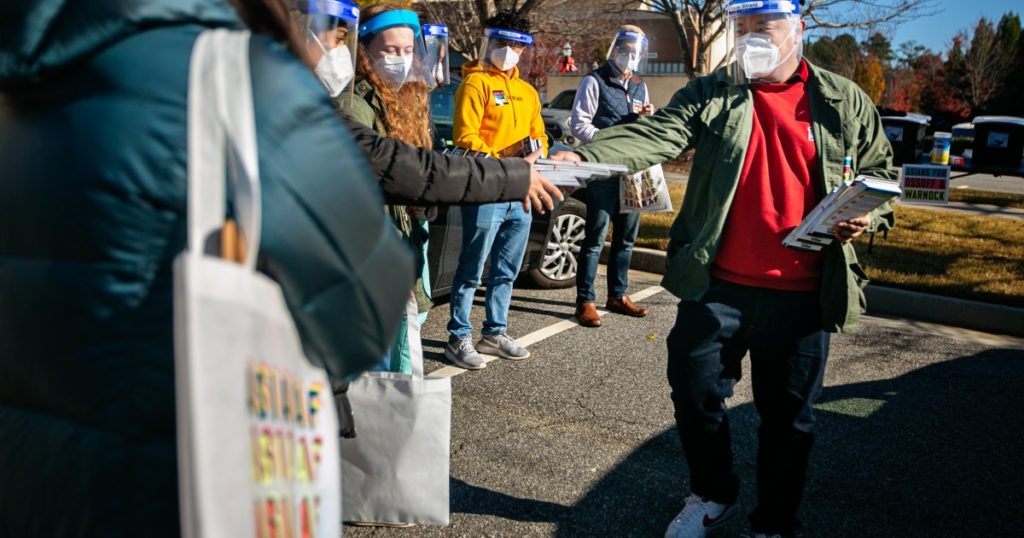 When Stephanie Cho moved from Los Angeles to Atlanta seven years ago, she was dismayed to find Asians largely absent from Georgia’s political life — barely contacted by Republican or Democratic parties or represented in government corridors.

Lobbying at the state Capitol in 2015 when she became executive director of the Atlanta chapter of Asian Americans Advancing Justice, she typically saw just two Asian faces: Korean-born Republican state Rep. B.J. Pak and a member of his staff.

Fast forward five years, Georgia will have six Asian American state representatives — five of them Democrats — when the Legislature convenes in January.

After Asian Americans and Pacific Islanders helped Joe Biden beat President Trump by a razor-thin margin of 12,000 votes in this state, Cho and a new generation of activists are ramping up their work to mobilize their community to vote for Democrats Jon Ossoff and the Rev. Raphael Warnock in twin runoff races that will determine which party controls the U.S. Senate next year.

“The Asian American population in Georgia is coming of age just now,” Cho said. “You have newer populations of Asian Americans across the board. Already, I see it’s very rapidly changing.”

Asian Americans make up just 3.2% of Georgia’s voting-eligible population — compared with about 15% in California — but they are playing an increasingly pivotal role in shaping the politics of this once-conservative and rapidly diversifying Southern state.

Turnout among Asian Americans in Georgia doubled from about 67,000 in 2016 to 140,000 in the 2020 presidential election — a faster rate of growth than Latino, Black or white voters. More than six out of 10 Asian American and Pacific Islander voters cast their ballots for Biden, according to exit polls.

At the same time, the overall Asian voter turnout rate of 58% still lags behind that of white voters, largely because of a lack of voter engagement and mobilization, as well as low English proficiency. In a state where overall turnout is about 66%, the rate is 70% for whites, 57% for Black voters, and 42% for Latinos.

Among the reasons for the higher number of Asian voters this year is that a new generation has turned 18, more recent immigrants became U.S. citizens, and transplants arrived from other states.

But voter mobilization is playing an even bigger role: 80,000 new Asian American voters registered in Georgia in the last four years, nearly doubling the turnout rate.

Across the northern suburbs of Atlanta, young 20-something activists have set up voter registration booths at Indian supermarkets, Vietnamese bubble tea stores and Korean churches. They are roaming suburban cul-de-sacs and modern apartment complexes that just a decade or two ago were rural farmland, urging Asians to vote for Ossoff and Warnock.

In the three months before the general election, Asian American activists with AAAJ reached out to 92% of Georgia’s estimated 238,000 eligible Asian American voters by phone.

Although activists did not knock on doors before Nov. 3 because of the pandemic, they have shifted strategy for the runoffs. Given the close margin of Biden’s victory, the high stakes of the Senate races and the confusion many voters have about runoff elections, the Asian American Advocacy Fund aims to knock on 100,000 doors before Jan. 5.

“Now we don’t have the villain we’re trying to defeat in the White House, the persuasion is really important at the doors,” said Aisha Yaqoob Mahmood, the fund’s director. “We’re trying to explain that this election is even more important than what they just did in November.”

Outreach is also happening with Republicans. While the campaigns of incumbents David Perdue and Kelly Loeffler declined to provide specifics, Republican National Committee spokesperson Kara Caldwell said in a statement that Asian Americans were Georgia’s fastest growing population and the RNC was “working tirelessly to ensure their voices are heard by door knocking and phone banking.”

Republican California Rep.-elect Michelle Steel, who was born in South Korea, plans to visit Georgia later this month to mobilize Asian American voters, seeking to generate the same enthusiasm that helped her flip a House seat in Orange County from Democratic control.

She hopes Georgia voters will see themselves reflected in her story as a first-generation Asian American elected official. “This is really important. So I’m going do my part,” she said.

The level of Asian outreach in Georgia is unprecedented, given the relatively small size of the population, said Bernard Fraga, a professor of political science at Emory University who specializes in voter turnout.

“Even if only white people voted in California, Democrats would still win,” Fraga said. “In Georgia, obviously, that’s not the case. Democrats feel that they need to have a broad, multiracial coalition in order to win Georgia. They can’t just rely on white voters. .… That’s relatively rare.”

By 1980, Lien noted, California already had 68 Asian elected officials on school boards, city councils, county boards, in the state Legislature, statewide offices and Congress. Yet Georgia has something that California did not have back then: local grassroots advocacy groups like the AAAJ and Asian American Advocacy Fund focused on consolidating power.

“Even 20 or 30 years ago,” Lien said, “California didn’t have this kind of sustained community-based Asian American infrastructure.”

Activists emphasize that the work that’s gone into engaging and mobilizing Asian Americans in Georgia did not happen overnight.

“This was years in the making,” said Park, who in 2016 managed to defeat a three-term Republican incumbent in Gwinnett.

Working with Stacey Abrams, then minority leader in the Georgia House, Park launched a multilingual operation to phone bank and canvass in Vietnamese, Korean and Chinese, as well as Spanish, to reach young and minority voters seen as less likely to turn out and who had rarely been contacted by political parties before.

A year later, when Ossoff challenged Republican Karen Handel for Georgia’s 6th Congressional District seat, he recognized the potential power of Asian Americans, setting up a field office targeting the community in the northeast Atlanta suburb of Johns Creek and appearing at an Asian American block party and meet-and-greets with Asian voters.

California Rep. Judy Chu (D-Monterey Park), who traveled to Georgia for a few days in 2018 to help Abrams’ campaign with its Asian American mobilization, said the outreach was worth it. A recent national survey, she noted, found that half of Asian Americans said they had not been contacted by the Republican or Democratic parties in the past year.

“If you do reach out” to Asian Americans and Pacific Islanders, Chu said, “it’s like gold. They haven’t had contact before. When you do have that contact, it is very impactful.”

In Georgia, much of the on-the-ground outreach has been led by youth activists — 25 and younger — who see the U.S. through a different lens than their parents and grandparents.

“They saw how their parents worked really hard to assimilate, and it really didn’t necessarily get them any more respect or power,” Cho said. “So what can they do differently to actually affect change?”

On a chilly Saturday morning, Angie Thuy Tran, a 26-year-old Vietnamese American activist, put on a white KN95 mask and a plastic face shield and walked briskly around a Gwinnett County subdivision, knocking on doors in an effort to get out the vote.

Gwinnett, a once-rural conservative county that has seen the white share of its population plummet from 96% to 35% in the last 40 years, is now one of the most diverse suburban counties in the nation, with a population that is 30% Black, 22% Latino and 12% Asian.

“Xin chào!” — hello — she said brightly as she approached a middle-aged man sitting in a Lexus sedan in the driveway outside a two-story brick home.

The man rolled down his window and smiled as Tran spoke in their native tongue. But as soon as she asked if she could count on him to vote for Ossoff and Warnock, he shook his head.

She thanked him politely, tapped on her cellphone to mark him as “strongly opposed,” and marched on to the next house, confident she would find Indians, Bangladeshis and maybe younger Vietnamese and Koreans open to voting for Democrats.

Nationally, Asian American voters favored Biden by a more than 2-to-1 margin. Many Asian Americans have been turned off by Trump’s rhetoric against immigrants and his handling of the COVID-19 pandemic, including his derogatory references to the “China virus” and “Kung flu.”

Cecelia Yoo, 70, a first-generation Korean immigrant, said she supported Trump before the pandemic but voted for Biden this year because she did not think the president had handled the pandemic well.

Yoo planned to vote for Ossoff and Warnock in the runoff, “to restore democracy and justice,” but did not align herself with Democrats or Republicans. “I’m supporting people,” she said, “not parties.”

But some of Trump’s remarks and positions have also garnered intense support from some older Vietnamese and Koreans who despise communism.

Cao Thái Hải, 65, a quality control manager who this summer co-founded the Vietnamese American Republicans of Georgia, said many conservative Vietnamese immigrants did not feel engaged in U.S. politics until Trump took a strong stance against socialism — and China, “our enemy.”

He worried many Vietnamese did not grasp the importance of the Senate races, now that Trump is not on the ballot.

Rather than knock on doors or hold rallies during a pandemic, he said he found it more productive to organize on social media. Around 3,000 tuned in to his Facebook page last week for a livestream urging them to protect the Senate majority.

“They are already leaning Republican,” he said. “It’s a very targeted audience. I don’t have to spend a lot of time convincing people who come in already motivated.”

Even though Tran is a much younger, Democratic-leaning activist, she understands the older generation’s fear of communism.

Born in Vietnam’s Binh Dinh province, a battle zone during the Vietnam War, Tran’s early life was shaped by communism: Her grandfather was a military commander for South Vietnam under the U.S. who was jailed for 10 years by the communists. Walking to school as a young girl, she passed multiple graveyards.

But Tran, who moved to the multicultural Atlanta suburban hub of Doraville when she was 8, has also been shaped by growing up alongside other low-income immigrants. After she was a student at one of the most diverse high schools in the nation, she became more political while attending a liberal arts college in Tennessee where she said she and other minority students were harassed for not being “American.”

“Sometimes we do have to leave our past behind,” she said. “America’s a different kind of democracy, and they need to have more faith in it.”

As Tran and a fellow canvasser traipsed through Gwinnett’s sprawling subdivisions, clutching fliers in English, Vietnamese, Mandarin and Korean, many on their list were not home or did not open their doors. Those who did answer were often undecided or wary of delving into politics.

It was not long, though, before they came upon Avni Sinojia, 44, a data analyst who was born in the U.K. to Indian parents. She said they could count on her to support Ossoff and Warnock and that she had already applied for her absentee ballot.

“The South has been historically Republican,” she said, “and we need to see a change.”

Still, she mused, her vote could be canceled out by that of her pharmacist husband, an independent who voted for Trump and typically aligned with Republicans. She had already reminded him about his absentee ballot, but he was very busy.

Jarvie reported from Suwanee, Ga., and Haberkorn from Washington. Special correspondent Erin Woo in Duluth, Ga., contributed to this report.