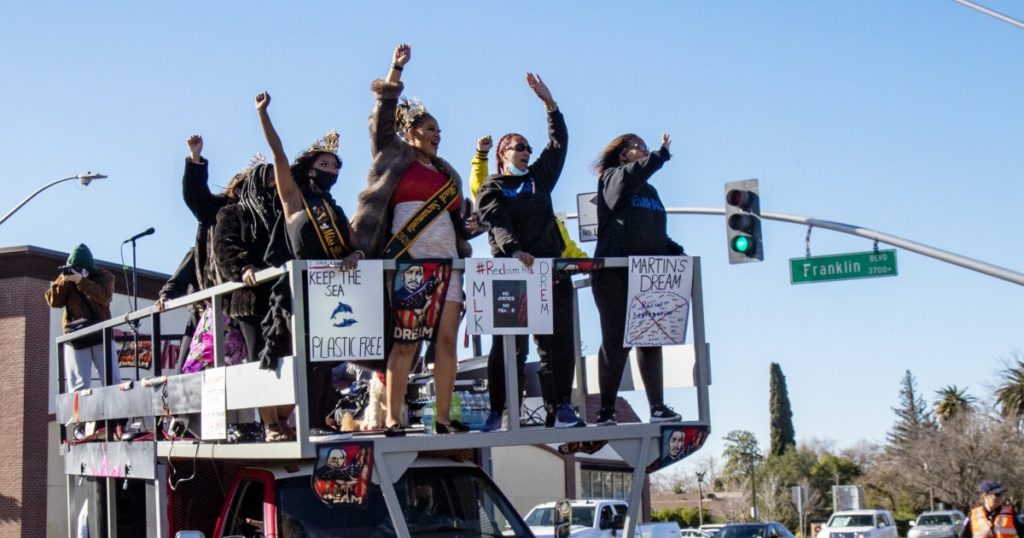 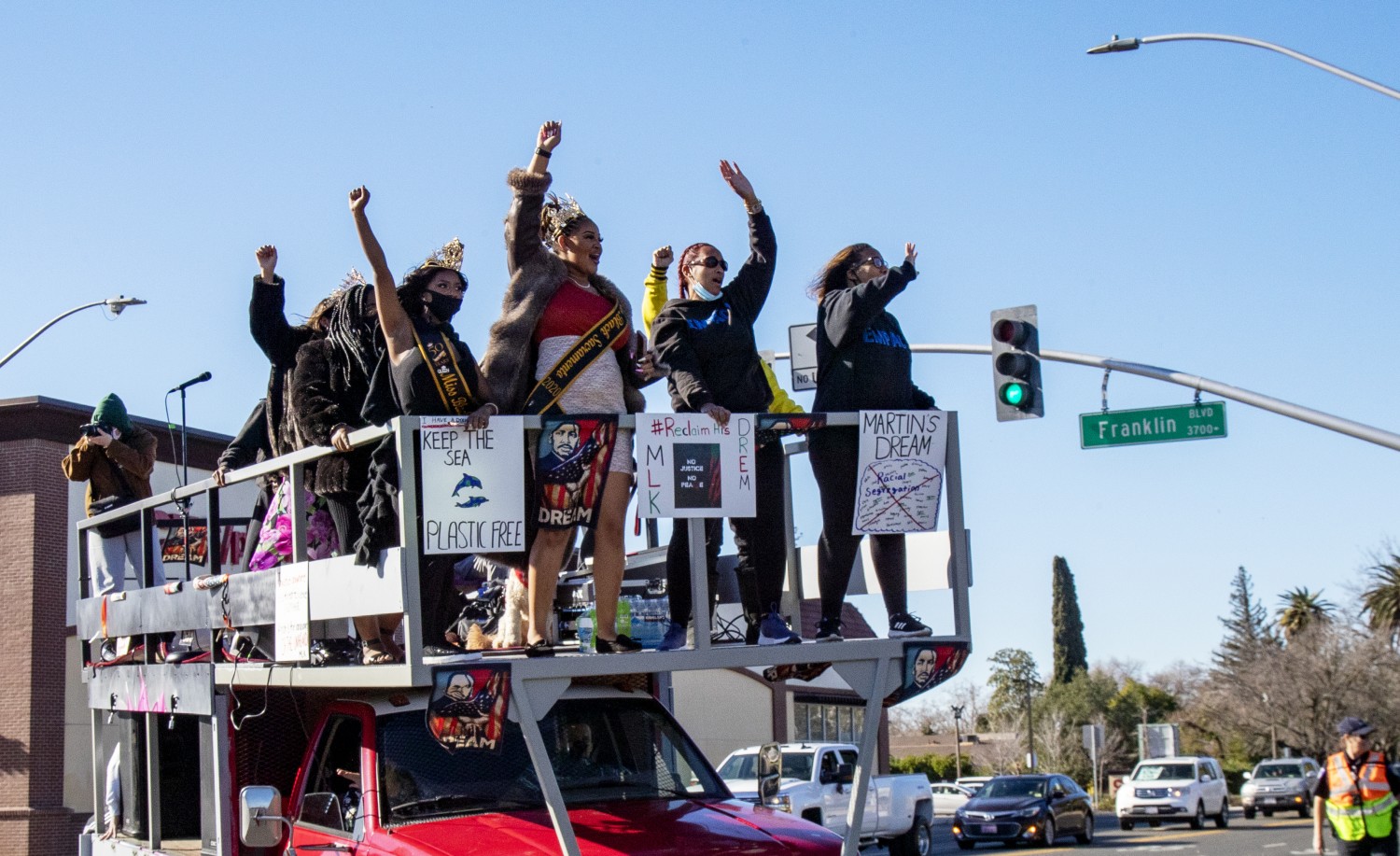 Stevante Clark lost his brother when Sacramento police mistook Stephon Clark’s cellphone for a gun and killed him in 2018, igniting weeks of protests. On Monday morning, Stevante stood in the back of a flatbed truck with an amplified microphone and a message for uniformed officers standing nearby.

“Sac PD and everybody up there, let’s get it,” he shouted at a half-dozen cops, setting off a cacophony of horns from the motorized procession behind him and sparking law enforcement to turn on their blinking lights to guide this march.

“Let’s get the dream going,” he yelled.

The pandemic and the recent insurgency at the U.S. Capitol, fueled in part by white supremacists, put a damper on many Martin Luther King Jr. commemorations Monday, especially in state capitols, where National Guard units have been dispatched to prevent attacks on state houses and federal government buildings.

But in Sacramento, hundreds of people were determined to celebrate an unconventional MLK Day by joining a vehicle caravan through the Capitol city.

Under the protection of the police escort, people navigating low-riders, bikes, cars and trucks took a winding course through the streets, beeping horns and showing both pride and perseverance in a city that has seen its share of troubles in the past year, including racial unrest.

They did not pass near the fenced-lined Capitol, where more than 1,000 National Guard troops are currently stationed at the city’s core. But they traveled with a message of unity and solidarity, even with the police beside them, if only for a day.

Seven months ago, the National Guard was here to control crowds protesting the death of George Floyd, killed by a Minneapolis police officer. Combined with pandemic lockdowns, the months of turmoil have left Sacramento, and its Black community, on edge — but resolute in celebrating a movement that has been at the forefront of changing policing in California.

Protests over Stephon Clark’s death helped push legislators at the Capitol to support a 2019 bill that changed when police can use deadly force, and another measure that opened more police records to the public. Last year, the Floyd protests helped propel a more modest slate of reforms, including a banning of chokeholds. In the upcoming session, legislators will probably pick up reforms that died last year, including a push to decertify officers with poor records.

“We’ve got to keep our composure,” said “Big” Frank Jackson, who won $100 before the caravan started for having the best motorcycle — a yellow and sparkling red Harley-Davidson with a custom alligator seat. “The hard thing is not giving in to hate.”

Like others at the caravan, Jackson said that the rioters at the U.S. Capitol would have faced harsher treatment had they been predominately Black.

“We would be dead,” he said. “We would never have gotten that far.”

Many in the crowd recalled the fear they felt watching televised images of the mob storming the Capitol in DC, with many carrying insignias and images of racism, including a man waving the Confederate flag. Seeing symbols of hate displayed so openly, multiple people said, brought emotions of sadness, fear and surprise.

“To tell you the truth, I feel it’s kind of scary,” said Desmond Wilson, who was riding a green Harley-Davidson with a contingent of Black motorcycle club members who participate in the MLK parade every year. “You just don’t know what’s going to happen to the country.”

Jackie Rose, a well-known activist in Sacramento, said that she was “saddened” by the images and also felt scared.

“I was very fearful as an African American living in this country,” she said. “But I don’t live in fear.”

Beyond the dismay, many in attendance likened current events to those in King’s day, echoing his grit and tenacity. King would have turned 92 on Jan. 15, but was assassinated in Memphis in 1968.

Sacramento’s mayor, Darrell Steinberg, who joined the caravan in a blue Ford Fusion hybrid, said, “Justice is never easy, but we only have one choice. … It may be the most unusual Martin Luther King Day but also maybe the most important.”

Gov. Gavin Newsom, from the Italianate Victorian governor’s mansion a few blocks from the Capitol, honored the day by officially nominating Assemblywoman Shirley Weber of San Diego to be California’s next secretary of state. If confirmed, she would become the first Black person to hold that post.

Known for her passionate speeches during legislative floor debates, Weber is often hailed as a moral authority for Democratic lawmakers and has taken the lead on contentious legislative fights over policing, education and racial injustice.

Weber, who spent 40 years teaching Africana studies at San Diego State University before she was elected to the state Legislature and who sponsored the bill to change California’s police use-of-force standard, said the attack on the Capitol and threats by radicalized Trump supporters showed that Americans cannot afford to become complacent went it comes to fighting for racial justice.

“One can only imagine that, if we’re faced with this today, what those protesters faced during his time, where there were no National Guards to protect them,” Weber, 72, said by phone from her home in San Diego. “Every now and then, something happens. I guess in some ways that’s good for us. It reminds us: Don’t get comfortable. Don’t get slack.”

Worry for the future was also on the mind of Ricardo Freeman and his friend Rigo Rivera, who were walking the perimeter of the Capitol Monday in what they described as a personal symbolic march for MLK.

Though the area was nearly barren of regular people, hundreds of armed National Guard troops stood in clusters at the entrances, around park benches and near camouflage Humvees and trucks. Dozens more California Highway Patrol officers milled on the lawn and on the white steps of the building, now cordoned off with fences and barricades.

A line of riot shields rested against a wrought-iron railing near a guard post manned by nearly a dozen military and law enforcement members, many of whom had large bundles of plastic tactical restraints fastened at their sides, ready for the wrists of anyone daring to attack.

Freeman said he isn’t worried about coming days, but about coming months, when he is concerned the fences may come down and complacency could set in.