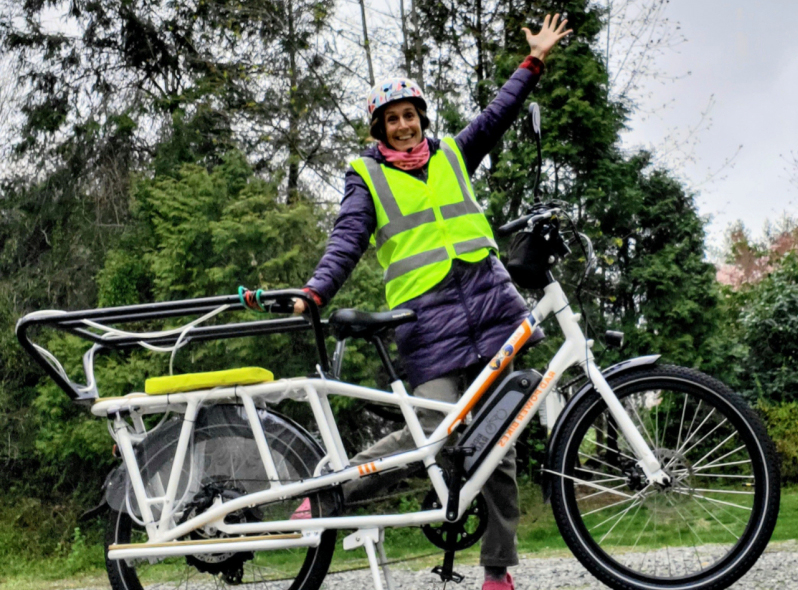 Last month, I was hit by a distracted driver during my bike commute home. I had arrived at a four-way intersection in a residential neighborhood and observed a vehicle approaching from the right. I always stop and wait, assuming drivers will ignore the stop sign. In this case, however, the driver came to a stop, so I proceeded. When I got to the middle of the intersection, the driver hit me.

The physical impact, thankfully, was negligible. The psychological effect on my friends and family — and from them to me — was more thoroughgoing.

The crash knocked me off my large-frame electric cargo bike, which also fell over; my bag landed next to me on the ground. A neighbor who happened to be outside ran over and helped me pick up the bag and bike. As we moved out of the road and to the nearest corner sidewalk to assess my condition, the driver left the scene. I was not badly injured and the bike did not require costly repairs, so I opted not to involve the police. (I did try to report the incident later, but the police were not helpful for the reasons I just stated.)

The entirety of my 10.27-mile, round-trip commute is alongside motor vehicles. There are no protected bike lanes on my route, nor any alternative routes between my home and office. The traffic violence occurred at a point that I normally considered as a “safer” section of my ride. I now know that safety for cyclists at any point on a shared roadway is an illusion.

The crash also punctured another illusion: that my choice of active transportation had widespread understanding and support in my social orbit. When I told friends and family about the incident, two themes emerged: 1) that I should have expected to encounter vehicle violence, and 2) that the crash was my fault because I chose to ride a bike to work instead of driving. Among the responses I heard were:

My friends and family are not the villains of this story. Some have submitted testimony in support of bicycle-safety laws. Most are occasional leisure cyclists themselves. Their responses, however, indicated how much living we cede to car culture and how much blame we place on cyclists when systems of basic transportation fail them.

I am an experienced bike commuter. I have taken the League of American Bicyclists “Smart Cycling” traffic-safety courses. In truth, however, these are faux talismans to which I cling in an attempt to convince others that I have done my part to share the road safely. As bikers, we convince ourselves that if we were to die from traffic violence, changes would happen. The sad truth is that no number of dead cyclists seems able to loosen the stranglehold of car-centric thinking on our world.

I bike less now, only riding to work on days when I can make my return trip outside of “rush hour.”  During biking my brain remains trapped in a hyper-vigilant state, triggered by all cars that feel too fast and too close.

Every day that I must drive, I miss the amazing joy of connecting with people I get while biking — the ability to experience my bioregion intimately, to hear birdsong, and get the exercise that, as a working parent, I find hard to squeeze in otherwise.

We desperately need to address traffic violence. Perhaps that should start with all of us examining our deadly alliance with the automobile.

Kate Rozen (@KRDemCT) is a transportation cyclist and safe-streets advocate living in Woodbridge, Conn., with her husband Justin and daughter Audrey.