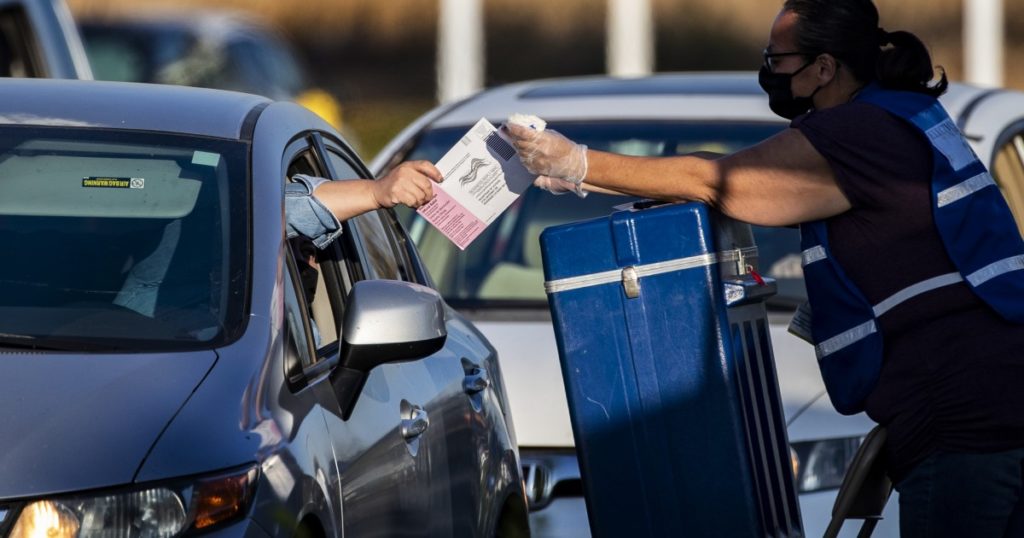 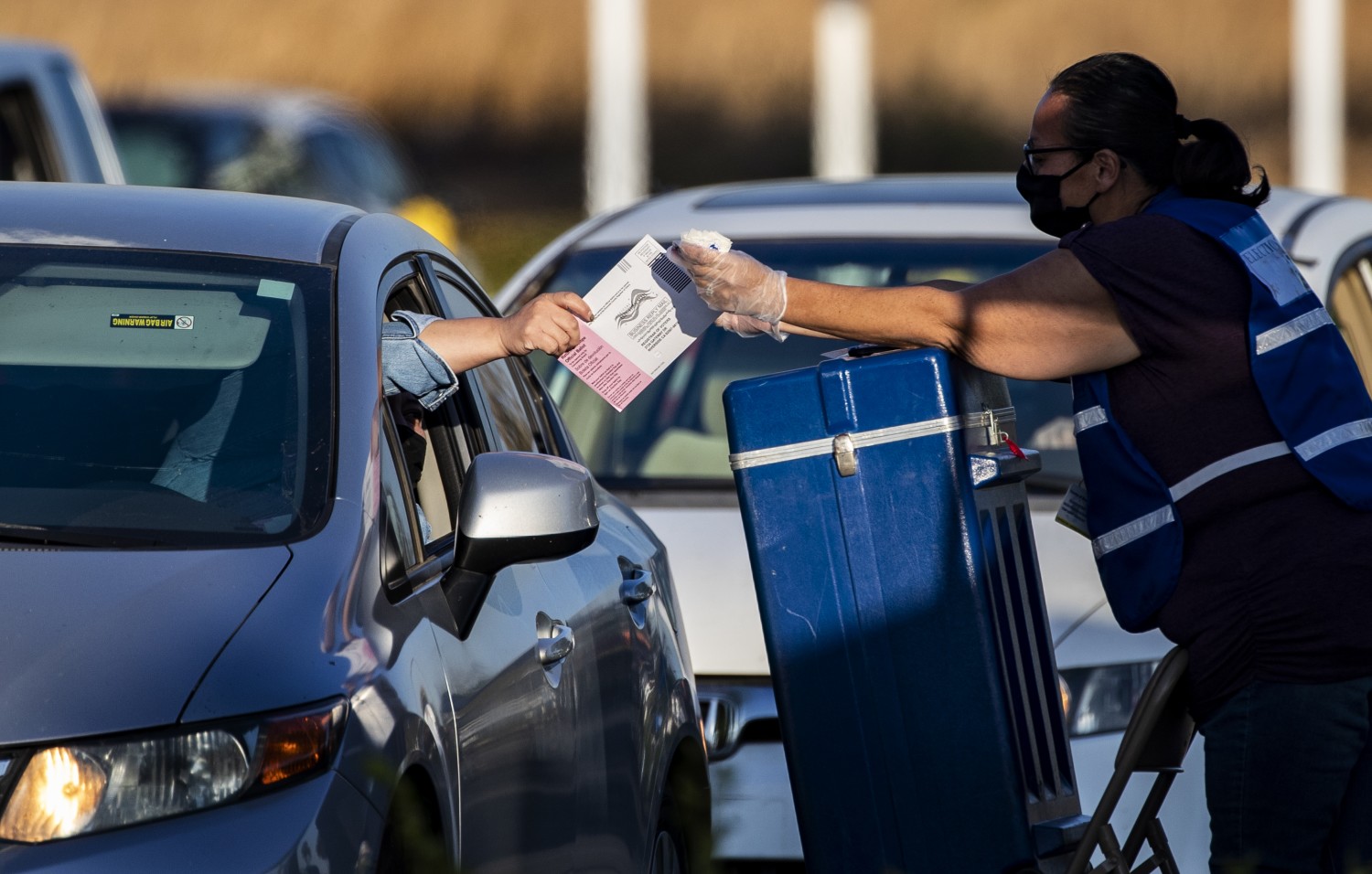 The email from the Republican Party of Orange County came with an urgent warning about the California recall election targeting Gov. Gavin Newsom.

“If we want to close the gap on the 8% Democrat turnout lead in Orange County we have to head into opening day of in-person voting strong!”

What followed was an invitation and a battle plan, using a contentious method at the center of a long-running war between Democrats and Republicans in the state: ballot collection.

“Help Recall Gavin Newsom by turning in your ballot ASAP!” said the call for voters to attend a GOP “Ballot Drop-Off Day” event, emphasizing that “all ballots will be properly signed for and delivered directly” to election officials.

Last year, ballot collection became a hotly debated issue as members of the GOP falsely accused Democrats of using it to help rig the election against President Trump and other Republicans in California. Now, during a potentially close recall election, both parties are downplaying their use of the method as a way to ensure voters return their mail ballots by the Sept. 14 deadline.

Under California law, voters may designate any person to collect a completed ballot and return it to elections officials on their behalf. But arguments between Democrats and Republicans about the legality of ballot collection have persisted, exploding into a series of court challenges.

After suing in April 2020 to prohibit ballot collection in California, arguing that it was susceptible to fraud, the state GOP’s admitted use of the practice and decisions by some Republicans to install unofficial ballot boxes in churches, stores and other locations ahead of the presidential election drew charges of hypocrisy from Democrats and scrutiny from then-Secretary of State Alex Padilla and then-Atty. Gen. Xavier Becerra, who ordered the receptacles be removed.

At the center of the controversy were questions over whether it is legal to collect ballots in third-party boxes instead of designating a person to do so and what constitutes an “official” ballot drop box.

The issue sparked angry exchanges between candidates and leaders of both major political parties along with a raft of accusations from Republicans of vote tampering and discrimination against informal ballot collections led by church congregations, none of which were backed by evidence.

Ahead of the recall election next week, some involved in getting out the vote on both sides of the effort appear to be attempting to disassociate themselves from the use of ballot collection.

Some Democratic officials denied it unequivocally.

“We’re not participating in ballot harvesting,” said Mark Gonzalez, chair of the Los Angeles County Democratic Party, referencing a derisive term for the practice most often used by Republicans that have questioned its legality. “That is not what the party does. We know that it’s legal, but that’s not our strategy, that is not our tool. Our tool is to make sure that every voter turns in their ballot on time and that every ballot is counted.”

The Republican Party of Orange County did not respond to several requests to discuss their get-out-the-vote efforts. But it advertised a ballot pick-up option in addition to the drop-off day, in which a “volunteer can pick up your ballot and drop it off at the Registrar of Voters.”

California Democratic Party Chair Rusty Hicks stressed that ballot collection was designed simply to give voters another option in how they return their ballots.

“I think there’s this viewpoint that you’re sending hundreds or thousands of people out to get ballots, to find ballots. It’s never been that way,” Hicks said. “It’s always been a voter-by-voter decision.”

For its part, the California GOP said in an email that the party plans on contacting voters to ensure they have the information that they need to cast a ballot in whatever way they choose, including ballot collection. CAGOP chair Jessica Millan Patterson previously told The Times that the party is “comfortable” with the practice and is “doing everything that we can on the ballot harvesting.”

On Friday, party officials launched an “election integrity” website where volunteers can report allegations of improper voting behavior. But the website wrongly characterizes state election law regarding ballot collection — stating that “for your vote to be counted, you must fill out the authorization section” on the ballot envelope that explains who took possession of the ballot.

A 2018 state law expressly states that an absentee ballot will be counted even if the envelope doesn’t include information about the person who collected it from the voter. A spokesperson for the state GOP declined to provide The Times with a comment explaining the website’s error, instead saying that voters should err on the side of caution.

Carl DeMaio, chairman of the political action committee Reform California, said that like other Republicans, he doesn’t believe ballot collection should be legal because it’s “too easy to intentionally or unintentionally not follow the rules.” He said voters should mail their ballots, but Reform California does offer ballot collection to those who ask for it as a “last resort.”

“Our ballot harvesting program is part of a larger program of getting out the vote,” he said, adding that volunteers are going door to door across the state and making calls to voters in support of the recall. “A harvester is told that once they receive the ballot they are to take that ballot to the registrar of voters and surrender it or take it to drop off location.”

Republican parties in Placer and San Diego counties also plan on collecting ballots, according to media reports, but did not respond to requests for comment from The Times.

In Fresno, County GOP Chairman Fred Vanderhoof said that he isn’t using ballot collection to get out the vote. During the 2020 presidential election, a list of locations sponsored by the Fresno County Republican Party showed a dozen ballot drop-off locations not authorized by elections officials, including gun shops and firing ranges. The list was later removed from the party’s website.

“It’s perfectly legal to collect ballots and take them in, but there is a bit of a process to it,” Vanderhoof said. “We could put all our interns out there collecting ballots, but we figure we reach a lot more by phone. We made a decision to reach more people quicker.”

But some institutions, such as churches and small businesses, may be collecting ballots, he said.

Meanwhile, others using ballot collection are referring to it by a variety of different names following last year’s conflict over the practice.

Last year in Orange County, then-Democratic Rep. Harley Rouda and Republican Michelle Steel, to whom he lost his seat in November, traded allegations over improper use of ballot collection during the final weeks of the campaign. Rouda blasted Steel after a photo was posted to Twitter showing a California Republican Party field representative in front of an unofficial ballot box as he worked to support her campaign. Steel then called Rouda a hypocrite for designating “neighborhood ballot hubs” where voters could bring their ballots and have them delivered to county election offices.

An internecine battle over both parties’ use of ballot collection extended into other races in Orange County, and included allegations that Republicans were operating a fake polling place at an unofficial ballot drop-off site.

The Democratic Party of Orange County said it won’t host ballot collection events this year, instead offering “ballot delivery” on a case-by-case basis as part of a host of get-out-the-vote strategies. The county Republican Party has used the term “ballot pick-up” in publicizing its own events.

Whether the parties are choosing their words carefully to avoid another dispute over ballot collection is unclear.

But Hicks said there is a difference between collection and delivery, an important distinction to some Democrats.

“‘Harvesting’ and ‘collecting’ put the power in the individual who is seeking and looking for ballots,” he said. “I believe that ‘ballot delivery’ puts the power in the hands of the voter.”

Through door knocking, text and phone banking, Orange County Democratic Party volunteers are connecting with as many voters as possible ahead of the election and gauging what individual voters need, communications director Rachel Potucek said, whether that’s information or help submitting a ballot.

“We’re doing everything we can to urge people to vote no on the recall. And if someone has questions about how to participate in that process, we want to help make sure that they have a voice and a fair vote,” Potucek said. “We’re available for folks to call if they want help to get their ballot delivered.”

Oscar Lopez, political director of SEIU California, said that the organization is not collecting ballots, partly because “California’s voting system is so easy.”

The California Labor Federation had 5,000 volunteers working to get out the vote last weekend, and intends to increase the number of volunteers five-fold . Though ballot collection hasn’t been a priority for the organization so far, a representative for the federation said it may become one in the week leading up to election day.

Jessica Levinson, an election law professor at Loyola Law School in Los Angeles, said that past altercations over ballot collection between Democrats and Republicans, both in California and nationwide, may have prompted some to shy away from publicly discussing or using the practice. Last year’s fight over ballot boxes “was a bad look for both parties,” she added.

“The reason everybody is being squirrelly is because so-called ‘ballot harvesting’ now has a bad name and it gives people this kind of icky response, like, ‘Is that safe? Should I have a problem with it?’” Levinson said. “There are negative associations that are enough for both sides to feel they’re going burn their hand if they get too close.”

Hicks denied that Democrats are trying to distance themselves from ballot collection, which his party has championed.

The party’s “aggressive get-out-the-vote strategy” is working, Hicks said, pointing to recent data that show 55% of the ballots returned in the recall were cast by Democrats.

Mike Madrid, a conservative strategist and co-founder of the Lincoln Project, said that a statewide push for ballot collection in the middle of a pandemic “doesn’t make a lot of sense.”

“My strong suspicion is that it’s as much logistical as it is politically fraught,” Madrid said. “To actually have this have an impact you’d have to collect hundreds of thousands of ballots — there’s nobody with the infrastructure set up right now to do that.”

It’s likely that groups aren’t participating in the practice because it’s ineffective in an election of this size, he added.

“The lower the turnout level, the more impact you can have,” Madrid said. “You can impact in state legislative races, city council races. You would have to have hundreds of thousands to make an impact statewide…I don’t think it’s stigma. The people you’re trying to stigmatize don’t care. If it works, you do it. If it doesn’t, you don’t.”

Assemblywoman Lorena Gonzalez (D-San Diego), who authored the legislation allowing ballot collection, said that her goal was to remove barriers to voting for those unable to leave work or home to participate in elections.

She is concerned, she said, that Democrats are not pursuing ballot collection with the same vigor that Republicans have in the past.

“I think we always leave too much on the table,” Gonzalez said. “Sometimes — God bless our Democratic Party — individuals within the party like to take a high moral ground… They distance themselves from practical measures that would make life easier for everyday folks.”