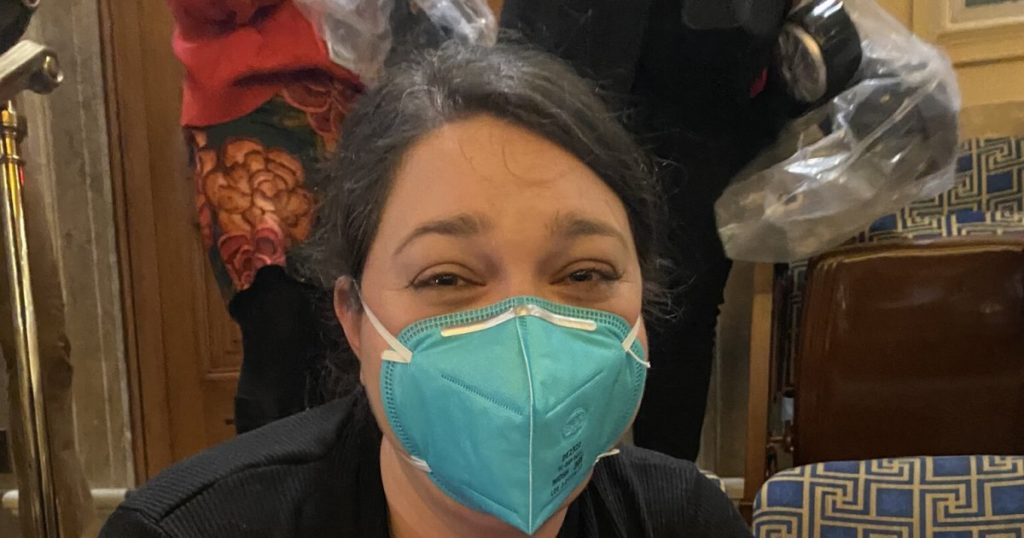 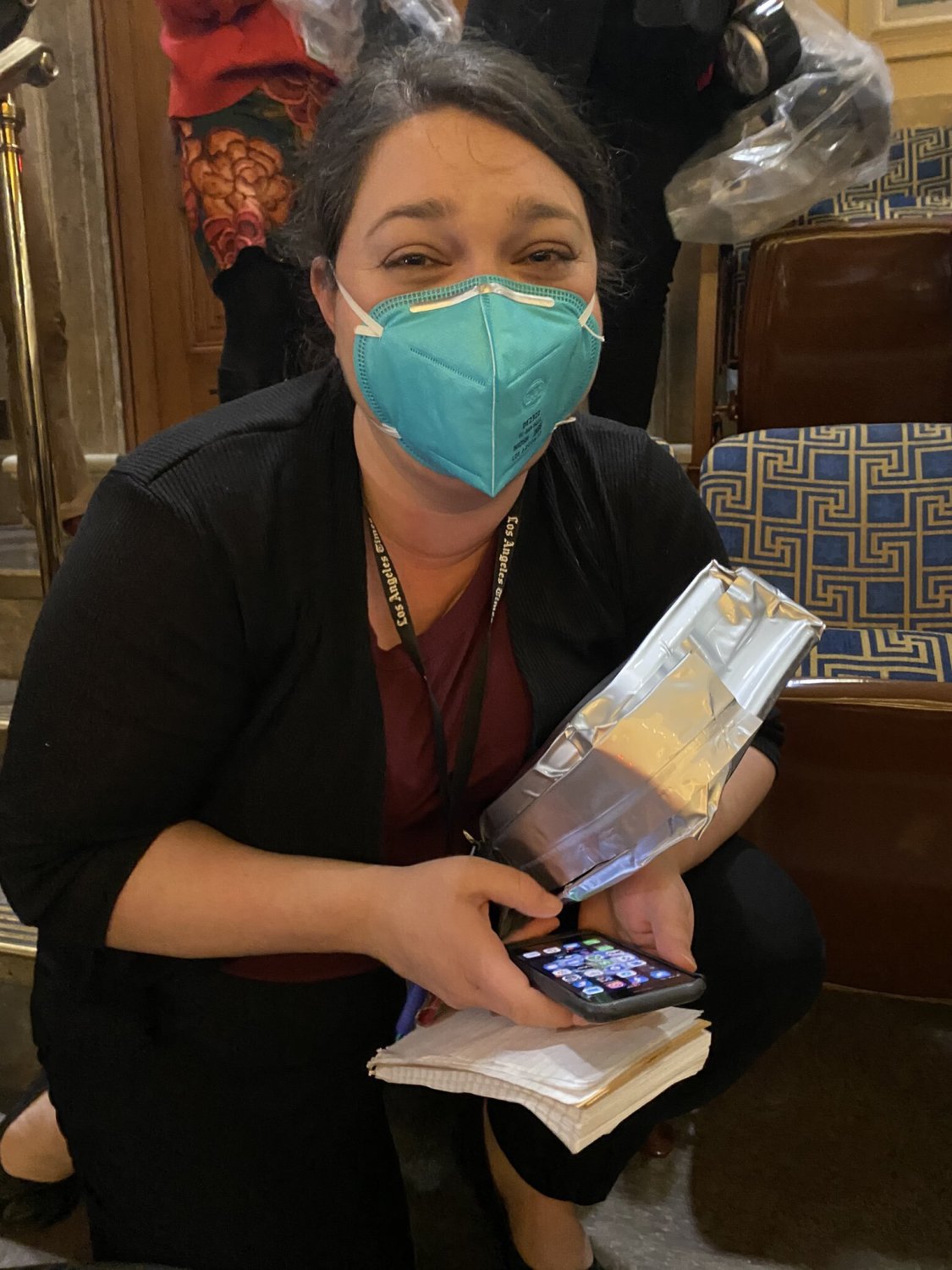 I love to be in the House or Senate chambers on big days. There’s just something about being in the room where it happens. It’s more than just a news story. It’s history, and a privilege to tell people about it.

Even amid a pandemic — I have an 18-month-old son — I leaped at a chance to attend the counting of the electoral college votes. It’s normally a ceremonial moment, an epilogue of sorts to the long campaign. But this time was different. There would be objections lodged by President Trump’s allies to seek to overturn an election the president lost. It promised to be dramatic, this cementing of President-elect Joe Biden’s victory.

But my husband was worried. Trump had been encouraging protests, and he feared it could grow violent.

After I put the baby to bed Tuesday night, he gently asked me to be careful. “Wear street clothes that let you blend in with the crowd,” he told me. “Jeans and a T-shirt.”

I arrived about 11:15 a.m. Wednesday, nearly two hours before things were supposed to kick off. I didn’t want to miss anything and wanted to make sure I had time to get through security. I settled into my seat in the press gallery, the seats above the speaker’s dais, and began to watch the joint session of Congress.

Senators and House members didn’t get very far. They were counting the votes in the alphabetical order of states. First came Alabama, then Alaska. When they reached Arizona, Sen. Ted Cruz (R-Texas) and Rep. Paul Gosar (R-Ariz.) objected to the recording of the state’s 11 electoral votes. Each house retired to its chamber to debate their objections.

I stayed in the House gallery. Just half a dozen lawmakers had finished speaking when I learned there might be trouble. I was taking notes on my laptop when my phone buzzed at 1:41 p.m. It was a text message from a House staffer forwarding me an alert from Capitol Police.

“The Cannon Building is executing internal relocation due to police activity,” the alert said. “All other staff should remain inside their building until further guidance is received from USCP. If you are outside a building on Capitol Hill, follow the direction of law enforcement officers…. Further information will be provided as it becomes available.”

I had been following events on Twitter and was aware that protesters were outside the Capitol. The alert unnerved me, but this is the Capitol, and threats are common.

Thirty minutes later, I headed up the stairs and into the press offices to see if I could learn more. The office’s emergency radio crackled to life. Then came a woman’s voice, one that seemed panicked: “Due to an external security threat located on the West Front of the U.S. Capitol Building, no entry or exit is permitted at this time. You may move throughout the building(s) but stay away from exterior windows and doors. If you are outside, seek cover.”

I knew what I had to do. I hustled down the stairs to my laptop. It was 2:15 p.m. After typing out an update for my editors, I looked over the railing into the chamber and noticed House Speaker Nancy Pelosi (D-San Francisco), second in line to the presidency, was gone. It was obvious her security detail had spirited her to safety.

I heard a ruckus behind me and turned and saw a dozen reporters being ushered into the gallery from press offices. Then police shut and locked the doors. Police interrupted the proceedings to announce that tear gas had been deployed in the rotunda.

A staff member handed me an evacuation hood, a cumbersome plastic bag that filters out tear gas and chemicals. She told me to pass it and others down the row until everyone had one. Reporters were not the only ones in the gallery. Staff members were monitoring the proceedings. More than a dozen lawmakers had also taken seats in the public galleries overlooking the House floor. Now we were locked in the room together.

On the floor, Rep. Ruben Gallego (D-Ariz.), a former combat Marine, was holding up his escape hood and explaining to other members how to use it. There were about 150 lawmakers down there, and Gallego was shouting to get their attention.

“Open the first package!” he yelled.

“Then open the second!”

“The hood then inflates over your head!”

A few minutes later, police escorted Gallego and other lawmakers out of the room through a side door. A few lawmakers assisted plainclothes officers grappling with a massive bookcase and shoved it in front of the chamber’s main double doors, the same one the president enters for the State of the Union address.

Pounding on the door began. The officers drew their guns.

One looked up and saw the the reporters and about two dozen representatives and staff scrambling over railings in the upper gallery to get toward the doors.

I slid behind a row of chairs and looked up as a female representative started to pray. Another member was talking loudly into his cellphone, providing a play-by-play. Several lawmakers were crying.

I heard the glass of the main door in the chamber crack. I peeked into the chamber as Rep. Markwayne Mullin (R-Okla.) attempted to reason with those attempting to push their way inside.

A loud crack split the air. It sounded like a gunshot. And then it got quiet.

Officers yelled to the lawmakers in the gallery to leave, but no one present had a key to the door. Lawmakers and police officers argued about opening the door and making a run for it. Police wanted lawmakers to make a dash for it.

Members disagreed. “Don’t open that door!” a representative shouted as an officer in the hallway fumbled with the door. “We don’t know who is behind it!”

I crawled over to where Rep. Norma Torres (D-Pomona) was kneeling. She hugged me and asked me about my baby, and I told her that he was fine.

She took my photo with her phone and posted on Twitter, tagging @latimes to alert my colleagues that I was OK.

“Can I do the hardest part of my job and ask you what you are thinking right now?” I asked.

It took her a second to compose her thoughts. “It’s horrible that this is America, this is the United States of America and this is what we have to go through because Trump has called homegrown terrorists to come to the Capitol and invalidate people’s votes,” she said.

Moments later, Capitol Police wrenched open the gallery doors. They told us to get out quickly. They were taking us to a secure location. As we walked toward the third-floor stairs, I could see several police officers standing over a half-dozen protesters lying face down on the marble, hands behind their heads.

It hit me suddenly — I realized I hadn’t yet told my husband I was safe.

Police told us to follow them. We walked for several minutes, hustling down a warren to hallways and a winding staircase. I have worked in the Capitol for eight years, and I can’t tell you the path we took. As lawmakers, reporters and staffers streamed ahead, I slowed so I could speak with a visibly shaken Rep. Jimmy Gomez (D-Los Angeles). He was livid. I pulled out my phone and hit record. He took a second to find his words.

“This shouldn’t happen in the United States,” he said, his eyes rimmed with tears.

We reached a secure room. That’s all I can say about it at this moment. It was large and filled with leather chairs and walnut tables, and you’ve seen it on TV. It was already filled with lawmakers, staffers and other journalists. As members typed on their phones and were updated by security officials on the status of the riots, staff handed out Goldfish crackers, fruit snacks and little bottles of water.

A member led a prayer. Another, a former ER doctor, reminded me to stay hydrated. A group of Democrats grumbled about Republicans not wearing masks.

I went looking for California lawmakers and began interviewing them. After each, I uploaded the audio to my colleagues in my bureau to add to stories on our website.

A member pleaded with colleagues to not do interviews with reporters. They were worried we might accidentally betray our location.

Kimbriell Kelly, my boss, sent me a message asking for a first-person video of what it was like in the room. I said I couldn’t. Lawmakers were “panicked that I might inadvertently give away their location,” I told her. “I’ll do in writing if that’s ok?”

That detail “just hit me in the gut,” she wrote back.

An hour passed. My husband sent me a photo of my baby smiling. It teared me up.

Just after 5:30 p.m., the sergeant at arms, the House’s top security official, announced the Capitol had been secured but urged members to stay in place. He wanted a bit more time, he said, to guarantee their safety. Ninety minutes later, Pelosi came by to address the remaining members (some had slipped back to their offices). The speaker criticized the “mobs desecrating the halls of the Capitol of the United States” and declared that the House and Senate would return immediately to finish their work. The speaker said she didn’t want the rioters to think they had won.

Forty-five minutes later, more than four hours after being locked inside, I was permitted to leave. There was only one place for me to go.

I headed upstairs back in the gallery — to chronicle history.