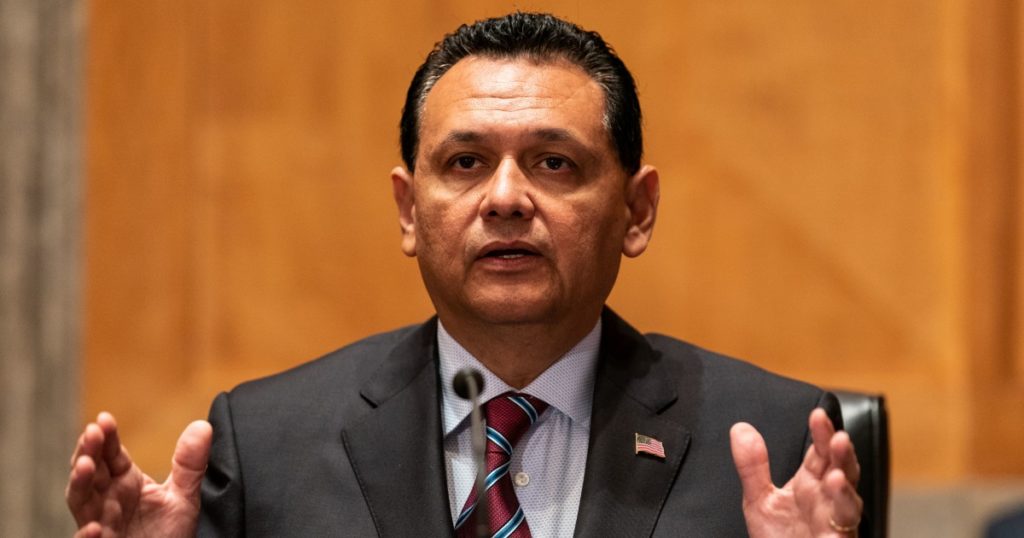 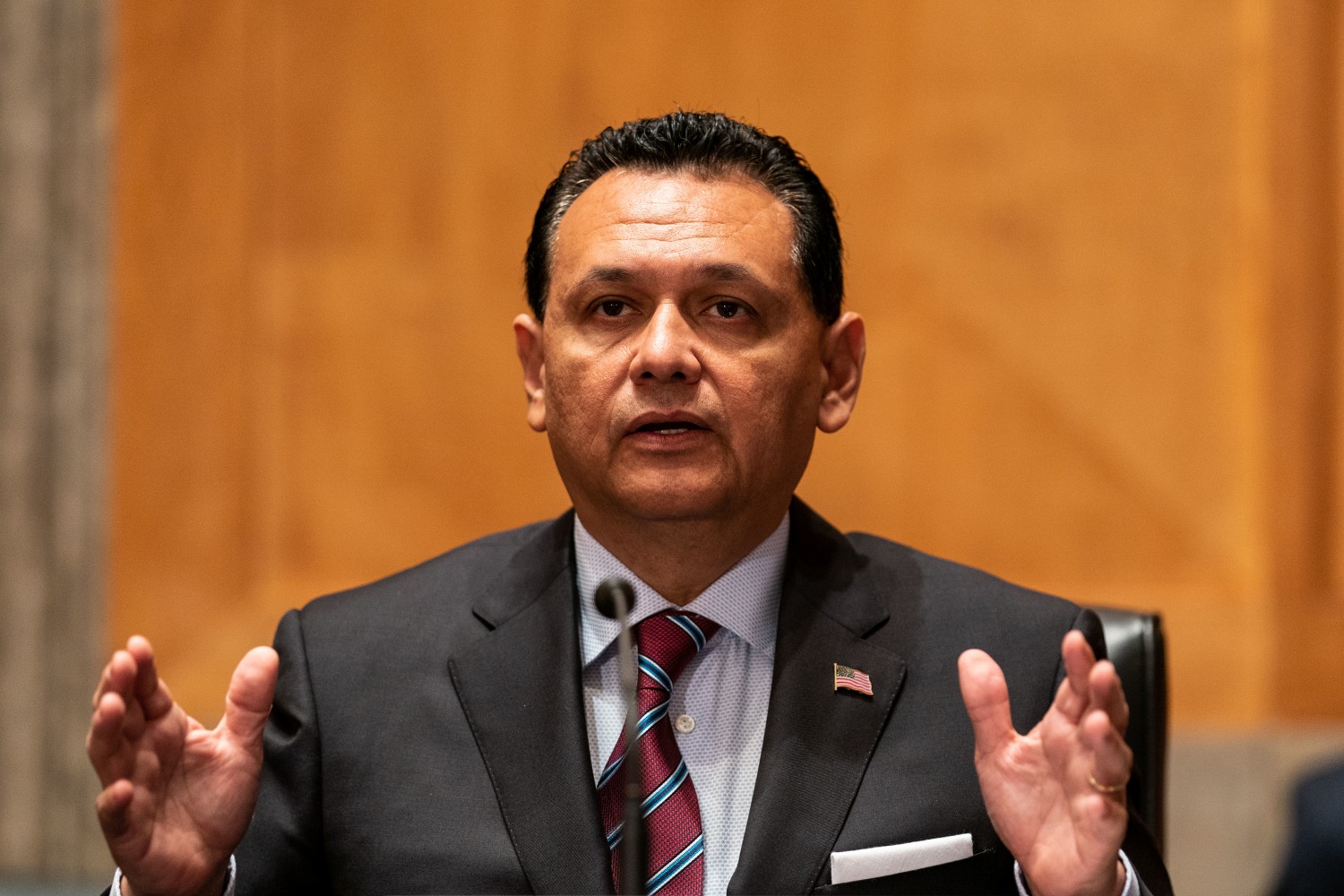 Ed Gonzalez, a Texas sheriff and President Biden’s pick to lead the embattled Immigration and Customs Enforcement agency, faced a grilling from Republican senators Thursday as to why he ended a voluntary collaboration between local law enforcement and federal immigration officials — and whether his past criticism of ICE makes him the right person for the job.

If confirmed, Gonzalez would be the first Senate-approved director of the agency in more than four years. As the sheriff of Harris County, where Houston is located, he presides over the third-largest sheriff’s department in the country.

“I am concerned … about whether it would be appropriate for you to lead an agency that you’ve been so critical of,” said Sen. Rob Portman (R-Ohio), the ranking member on the Senate Homeland Security and Governmental Affairs Committee, which held Gonzalez’s confirmation hearing Thursday. The panel also considered the nomination of Robert Santos to be Census Bureau director.

Gonzalez, whom Biden hopes will revitalize and refocus ICE, walked lawmakers through his decision to withdraw from the program, known as 287(g), which delegates some federal immigration enforcement authority to local and state police. The program was dramatically expanded under the Trump administration, but Biden pledged during his presidential campaign to end all such deals struck by his predecessor.

The sheriff explained that the decision came down to budgetary concerns and the ability for his office to work with a “diverse immigrant community.”

Gonzalez frequently appeared to seek middle ground during the hearing, telling Portman when pressed that despite terminating the program in Harris County, he does not intend to end such collaboration on a national level.

“I also wanted to make sure that we continue to remain focused on having the avenues necessary to arrest serious offenders in our community that impact our public safety,” he said.

In recent years, ICE has grappled with a host of challenges — including eroding officer morale, as well as public outcry over its policies and practices, which led to the popularization of the #AbolishICE movement among progressives.

Gonzalez decried a series of ICE raids in 2019 that targeted immigrants in the U.S. illegally, tweeting at the time that the vast majority “do not represent a threat to the U.S.” In the tweet, he added that the focus of ICE raids “should always be on clear & immediate safety threats,” and that his sheriff’s department would not participate in such broadly targeted efforts.

While ICE is responsible for immigration enforcement in the interior, many senators focused their questions on the border, where last month, authorities made more apprehensions than any monthin at least a decade, CNN reported Wednesday.

In April, ICE deportations fell to the lowest monthly level on record,according to data obtained by the Washington Post — a point of concern for the Senate Republicans as they questioned Gonzalez on his plans to strengthen the agency’s operations.

While ICE arrests and deportations are on the decline, the number of individuals held by ICE has risen since the beginning of 2021, with more than 27,000 people currently in ICE custody, as opposed to about 15,000 at the start of the year, according to data from the Transactional Records Access Clearinghouse at Syracuse University. Just under 80% of ICE immigrant detainees have no criminal record. Many of those detained recently crossed the border and were apprehended by border officials, then transferred to ICE custody. And with deportations down, others are waiting longer in custody.

Sen. Josh Hawley, R-Mo., an immigration hardliner and one of former President Donald Trump’s most vocal allies, questioned Gonzalez repeatedly on whether he supports expelling undocumented immigrants who have committed crimes, which Gonzalez affirmed.

Meanwhile, Democratic senators on the committee focused their questions on allegations of abuse, including reports of forced sterilization of immigrant detainees in a Georgia detention facility that came to light last September.

Sen. Jacky Rosen, D-Nev., asked Gonzalez what policy changes he would consider following the allegations at the center, which the Biden administration recently announced would be closed down.

“I’ve heard stories of some of the inhumane treatment. And that would not be in alignment with the vision that I would have for ICE if confirmed,” Gonzalez, responded but did not offer any specific policy changes.

California’s own Democratic Sen. Alex Padilla asked Gonzalez what he thinks about ICE officers impersonating local law enforcement when conducting immigration arrests, a controversial practice, which civil-rights groups such as the the American Civil Liberties Union say is unconstitutional because it violates the Fourth Amendment’s prohibition against unreasonable search and seizure, but which the agency maintains is permitted in some circumstances.

Gonzalez again avoided specifics, maintaining it is important to make sure ICE is not “unnecessarily scaring” or “terrorizing communities” in its operations.

And his responses drew criticism from the ACLU, which the group called “deeply disappointing” in a statement Thursday.

The ACLU slammed what it called Gonzalez’s “lack of commitment” to end collaboration agreements nationally between ICE and local law enforcement.

“Gonzalez seemed more interested in placating anti-immigrant politicians on the committee than laying out a vision for reform,” the ACLU said. “This was a huge missed opportunity to make it clear to immigrant families and communities that the Biden administration is truly committed to making a decisive break from the Trump administration’s racist and anti-immigrant policies.”

Representatives from ICE, the American Federation of Government Employees (AFGE), the AFGE National ICE Council did not immediately respond to a request for comment about ICE’s reported abuses and criticisms of the agency.

Throughout the hearing, the Republican lawmakers repeatedly returned to the relationship between ICE and local law enforcement — in what may be a test of Gonzalez’s potential to become the first Senate-approved ICE director since the Obama administration.

“Do you believe you’re going to be able to create a relationship where law enforcement will want to work with ICE, going forward?” Sen. Rick Scott, R-Fla., asked Gonzalez, inquiring how Gonzalez plans to measure the agency’s success.

Developing relationships with local communities would be a marker of success, Gonzalez said, adding, “the work of ICE can be hard to understand, and it’s important for us to be engaging with the community.”

“We are a nation of immigrants,” he added. “We are a generous country and we should be. But we also have to have immigration laws that are enforceable.”

Molly O’Toole contributed to this story.