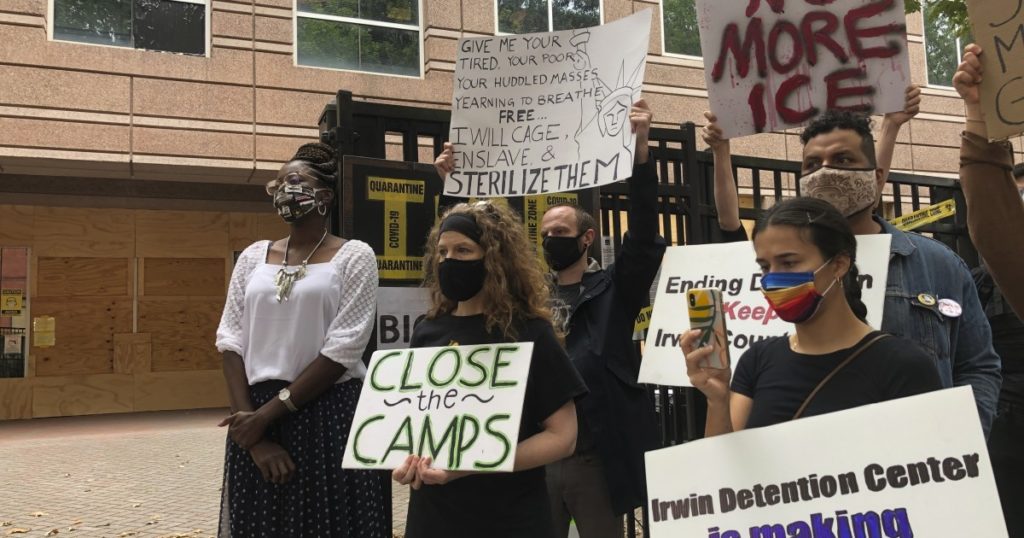 The Biden administration will close two immigration detention centers in Georgia and Massachusetts that are under federal investigation for alleged abuse of detained immigrants, including the Irwin County Detention Center where scores of women said they suffered medical abuse.

Homeland Security Secretary Alejandro Mayorkas directed Immigration and Customs Enforcement on Thursday to stop detaining immigrants at Irwin “as soon as possible and consistent with any legal obligations,” and to do the same at the C. Carlos Carreiro Immigration Detention Center in North Dartmouth, Mass., as well as terminate an agreement with the Bristol County Sheriff’s Office “that is no longer operationally needed.”

As of April 22, the Irwin County Detention Center, located in Ocilla, Georgia, no longer held any immigrant women, after dozens ultimately stepped forward to report unnecessary medical procedures conducted by a local gynecologist, which the women said were performed without their consent, according to Times reporting. Several women were deported after speaking out publicly or testifying to federal investigators about their experience with the gynecologist, Dr. Mahendra Amin, who denies the allegations and remains under criminal investigation.

A number of the women say they are still suffering from the procedures, and still do not know what exactly was done to them.

“All of the pain … was worth it,” Jaromy Floriano Navarro, who was deported to Mexico shortly after speaking out about alleged abuses at Irwin last year, said in a statement shared with the Times.

Mayorkas instructed that any evidence at Irwin be preserved for “ongoing investigations,” and that if necessary, remaining ICE personnel and detained immigrants be relocated.

“Allow me to state one foundational principle: we will not tolerate the mistreatment of individuals in civil immigration detention or substandard conditions of detention,” Mayorkas said in a memo to ICE Acting Director Tae Johnson directing the closure of the sites, according to a statement.

President Joe Biden promised on the campaign trail to end the use of for-profit detention centers, but there had been few signs of an effort to do so before Thursday’s move, first reported by The Washington Post.

Within days of taking office, Biden ordered the Justice Department not to renew contracts with private prison companies — but notably left out the Homeland Security department, which oversees immigration detention. Of hundreds of immigration detention facilities in the United States, private prison companies run the vast majority, holding more than 80% of detained immigrants.

ICE uses Irwin along with the U.S. Marshals Service as part of an intergovernmental agreement. LaSalle Corrections, the private, for-profit prison company which runs the facility, also operates 25 other detention facilities, correctional centers and jails. The company did not immediately respond to requests for comment Thursday.

The Homeland Security Department pays independent doctors such as Amin, who practices gynecology in nearby Douglas, Ga., for the procedures they perform on patients in immigration detention.

Mayorkas on Thursday said closing the two facilities is “an important first step” toward a goal of making “lasting improvements” to the U.S. immigration detention system.

Lawyers and advocates who’ve worked with the women at Irwin welcomed the directive, but called for greater accountability, noting that several of the women who alleged abuse at Irwin, while released into the United States, still face final orders of removal and remain at risk of deportation. Lawyers have filed several lawsuits seeking temporary restraining orders against the removals, arguing that the then-Trump administration was violating the women’s 1st Amendment and due-process rights, as well as longtime policies protecting those cooperating in criminal investigations.

Some of the women were deported and separated from U.S. citizen children, and have petitioned to reopen their immigration cases and return through humanitarian parole, according to Elora Mukherjee, director of the Immigrants’ Rights Clinic at Columbia Law School.

“The survivors of Irwin need more,” she said. “All these women deserve to be home in the US with their loved ones and given the support and redress they need to recover.”

“These closures are an important first step in addressing horrific abuses at detention centers,” she continued. “But shutting down these facilities is just the beginning. The immigration detention system is rife with abuses and the system must be reformed and abolished.”

The alleged abuses at Irwin prompted a national outcry in September last year after a nurse at the facility filed a 27-page whistleblower complaint to the Homeland Security inspector general, leading more than 170 lawmakers to demand an investigation.

Rep. Pramila Jayapal, (D-Wash.), who led calls for investigations into the whistleblower’s allegations and ultimately, a House resolution condemning the forced medical procedures at Irwin, said she will be keeping pressure on Biden to make good on his campaign promise.

“I am glad to see the facility closing, but I will not stop fighting for full accountability for what happened and for real justice for all of the women impacted,” she said. “It is long overdue that we end the use of private, for-profit facilities throughout this country, repeal mandatory detention, and promote community-based alternatives.”

Mayorkas said he’d continue to review reports of abuse at other federal immigration detention centers, and has ordered updates from Homeland Security leadership on the “quality of treatment of detained individuals” and “conditions of detention,” as well as operational needs.

Inspection reports from the detention oversight arm of ICE’s Office of Professional Responsibility showed that Irwin was consistently in violation of national detention standards that “directly affect detainee life, health, safety, and/or well-being.”

The inspection reports also showed that Irwin routinely referred more than 1,000 detainees a year for outside medical attention, far more than most detention facilities of its size.

“DHS detention facilities and the treatment of individuals in those facilities will be held to our health and safety standards,” Mayorkas said. “Where we discover they fall short, we will continue to take action as we are doing today.”