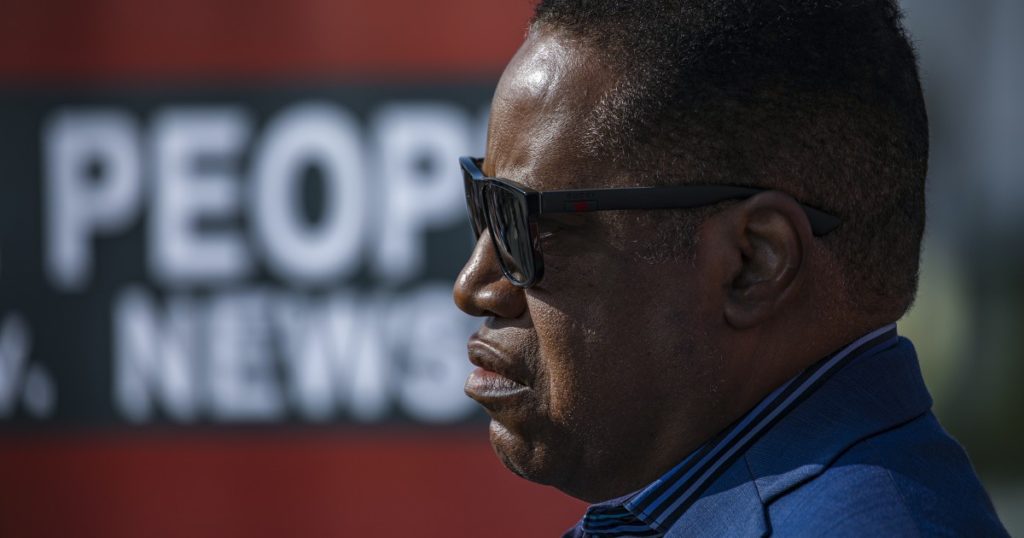 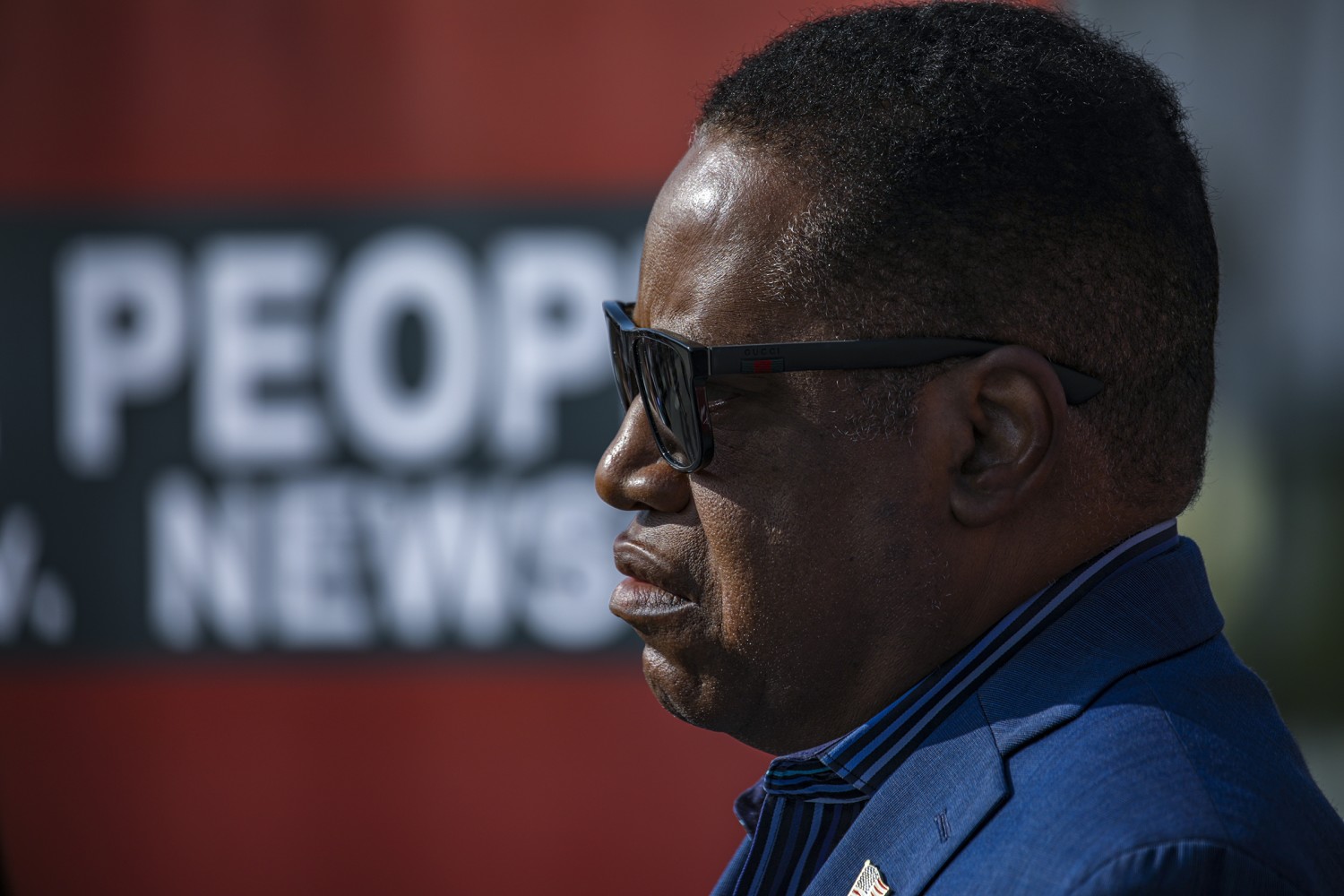 I was in the school carpool line, picking up my daughters in Chatsworth, when another mom called out to me. “Hey Sandy, you’re on the radio!” she said, gesturing excitedly toward her car radio. “It’s Larry Elder; turn it on!”

I smiled back at her, nodded and rolled my window up. I did not turn my radio on.

I knew I wasn’t on the radio; I was being talked about on the radio — lambasted, no doubt, by Elder, a Black talk show host whose life’s work seemed to focus on tearing down other Black people.

As a columnist for the Los Angeles Times, I didn’t take his criticism personally. I was just a prop to fill air time, a convenient straw man to misrepresent and then attack. I didn’t know what Elder was saying about me or my column, but I was sure it was something I did not want my children in the back seat to hear.

That afternoon was more than 20 years ago, but I still remember it — and how embarrassed I felt to think of the other carpool mothers listening to Elder try to shred my credibility.

Back then, Elder was already mining the sort of talking points that would land Donald Trump in the White House in 2016.

In Elder’s estimation Black folk were layabouts and criminals, prone to violence. Hispanics were turning good neighborhoods into gang-infested danger zones. Women were whining too much about sexism — especially the ugly ones.

Now that he’s courting votes, Elder seems to have sidelined his most offensive insults and softened his rhetoric a bit. He knows he can’t risk alienating voters by seeming unhinged. His campaign message has two basic two pillars: “personal freedom” (he’s in favor) and “government overreach” (he’s opposed).

I imagine that for the state’s 5 million Republicans, Elder must seem like a dream come true: a Black man — without Kanye West’s baggage — who is an unabashed conservative.

I wanted to interview Elder for this column. I tried, and was given a weekend slot. But a few days later, his people canceled, saying “rally and travel” had filled “his last sliver of availability.”

But here’s what I would have liked to talk to him about.

We hail from a similar demographic. Elder and I were born in the 1950s, a few years apart. We both grew up in working-class Black neighborhoods — mine in Cleveland and his in Los Angeles — with no-nonsense parents from the South, who valued hard work and education and passed that down to us. We were both honor students, in high schools where most of our classmates were more concerned with being cool.

Then, as now, there was a diversity of opinion among Black Americans on social and political concerns. I can still remember my parents arguing about which candidate — Richard Nixon or John F. Kennedy — won the 1960 presidential debates. Elder grew up in a divided household too; his father was a Republican and his mother a Democrat.

We came of age during a tumultuous time for race relations — you had to choose sides on a lot of issues if you were Black: Integrate or separate? Embrace the Afro or submit to the straightening comb? Make peace with an unfair system or try to dismantle it?

And there were always Larry Elders in the mix: Black people who desperately wanted to be liked and admired by white people, to stand outside the taint of stereotypes, to be deemed the exceptional ones. To distance themselves from the rest of us.

I don’t begrudge Elder his conservative ideals, but his hypocrisy is irritating. He rails against affirmative action but was admitted to his Ivy League university through an affirmative action program. He’s called fatherless homes “America’s biggest domestic problem,” yet he cut his own father out of his life, refusing to speak to him for 10 years.

Given all that, I wonder why he’s so obsessed with enumerating the failings of people who look like him. In his 2008 book “Stupid Black Men,” Elder declared that “the racist hard hearts and minds” of Americans are “a long gone thing of the past.” He clearly missed the mark on that, but he’s trying to make a point: Whatever problems Black people face today must be our own dumb fault.

Take his example of young Black men being followed around in stores as they shop. They ought not to be offended that shopkeepers are profiling them, he says. The store owner is right to be suspicious, when “three or four black kids come to [the] store with baggy pants.”

To Elder’s way of thinking, subjecting innocent boys to surveillance is an appropriate punishment for random bad acts by boys they don’t even know. Or, as Elder put it, “It’s Jamal, who stole a bag of Doritos the day before, who caused [the owner] to be paranoid about young Black men.”

That’s what Elder told former Times reporter John Mitchell 23 years ago, for a profile headlined “Larry Knows Best” that is well worth reading, no matter how you feel about Elder.

It’s easy to presume that Elder’s conservative agenda doesn’t stand a chance in California, where Joe Biden beat Donald Trump by almost 30 percentage points in November and where Democrats have controlled both houses of the state Legislature for decades.

Yet California voters are notoriously unpredictable.

As recently as 1994, Californians voted to bar immigrant children from public schools if they couldn’t document their legal status. And 13 years ago, we amended the state Constitution to outlaw same-sex marriage in California.

Ultimately those election results were overturned after being challenged in court on constitutional grounds. Still, they reflected a conservative strain among California voters that we still see today, in mask protests and anti-vaccine rallies and in grumbling about “those people” who are ruining everything.

It’s no wonder Elder’s rhetoric resonates for some Californians. These are dark times in the Golden State.

We’re stuck in a restrictive pandemic that shows no signs of ending. Entire communities are being erased by wildfire and drought. Businesses and farms are going under. Decent housing is out of reach for too many Californians. Every day, new homeless encampments sprout up on city and suburban streets.

But nothing Elder the candidate is saying would remedy any of that. His soundbites are tired clichés from old Republican playbooks, or perilous wishful thinking: Crack down on crime, fire more public school teachers, get government out of our business, and pretend that Covid19 doesn’t exist, so we can ditch those pesky masks and ignore annoying public health advice.

Elder’s spinning a yarn on the campaign trail much as he did for decades in the broadcast booth — and public scrutiny now is making his shortcomings easier to see. I may have shrunk from his criticism many years ago, but if he feels a need to upbraid me now, I will view that as a badge of honor.