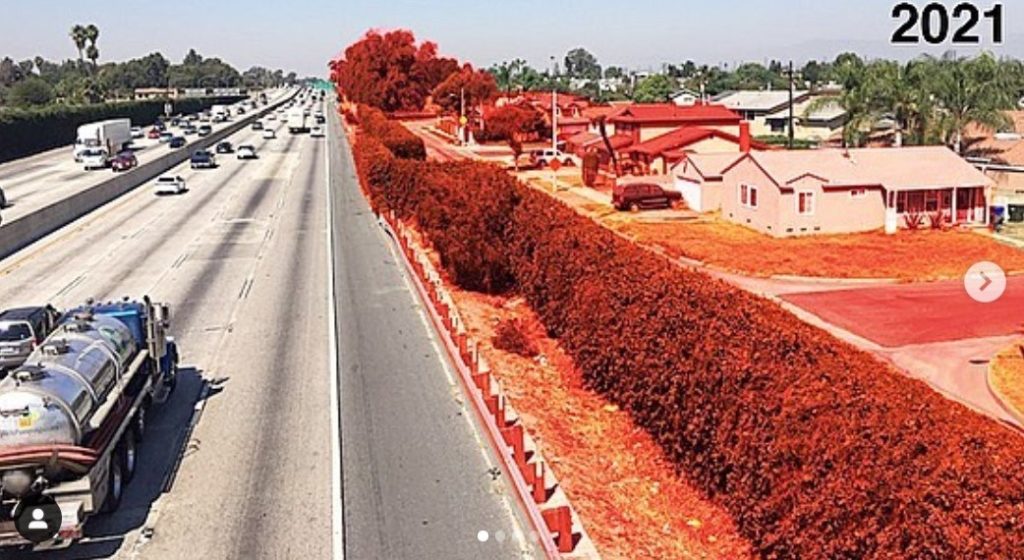 Last year, Metro announced that its 605 Freeway Corridor Improvement Project (CIP), which would widen the 605, 5, and other freeways, would take out hundreds of homes – mostly in the cities of Downey and Santa Fe Springs. Despite a Metro motion calling for a review of the project and less harmful alternatives, some representatives of cities near the project still support the freeway widenings, primarily because the project is seen as an investment in their area. Many of these representatives cite the myth that freeway widening will reduce traffic and congestion.

The I-5 Consortium Cities Joint Powers Authority (I-5 JPA) is a little-known governmental body whose mission is basically to widen the 5 Freeway between Orange County and the 710 Freeway. The I-5 JPA board consists of representatives from the cities along that corridor: Commerce, Downey, La Mirada, Norwalk, and Santa Fe Springs. Though the JPA’s purpose is freeway expansion, it is not as powerful or well-funded as the county’s freeway builder, Metro, or California’s freeway builder, Caltrans.

It is difficult to get freeway project information out of Metro and Caltrans, so the I-5 JPA meetings and documents are one way to track the 605CIP. The I-5 JPA doesn’t make much public information available on its one-page website, so Streetsblog recently requested and received some I-5 JPA public records. Last October, SBLA shared I-5 JPA public records on how Metro and Caltrans used non-urban roadway standards to “drastically” expand the 605CIP footprint.

On January 26, Metro shared some preliminary information on a new alternative proposal that would reduce 605CIP home demolitions somewhat.

The January 13 status report I-5 JPA from Executive Director/Authority Engineer Yvette Kirrin offers a few more details on the new Metro alternative and its impacts to homes. Metro decided “to no longer include a second HOV/HOT lane along I-5” and is eliminating “additional (proposed) right of way acquisitions via reductions standards, shortening on ramps (for example) where Metro/Caltrans feels they are defensible.” Per Kirrin, these design revisions meant that “right of way impacts have been reduced by nearly 70 properties in the City of Downey” and parcel impacts “within SFS [city of Santa Fe Springs] were only able to be moderately reduced… by 4 homes and some parking spaces along an apartment complex area.”

[Those early January numbers are somewhat smaller than what was shared in late January: a reduction of 77-82 parcels in Downey, and a 30 percent decrease in Santa Fe Springs, which would be 12-16 parcels. Apparently the plans, never shared publicly, keep changing.]

In January, on a 4-1 vote with Downey Mayor Claudia Frometa opposed, the JPA board approved submitting a letter to Metro CEO Phil Washington and Metro boardmembers rebuffing several instructions Metro had approved in October. The JPA letter, dated January 25, 2021, is signed by the JPA chair City of Commerce Councilmember John Soria, but largely repeats verbatim points Kirrin wrote in an earlier status report.

In a direct rejection of the Metro board motion that mandated a review of the 605CIP “purpose and need and its alignment with various local and state policies and plans related to equity, greenhouse gas emissions and vehicle miles traveled” the JPA letter asserts that equity and the environmental impacts do not apply to the project.

…regarding Metro’s recommendation for a holistic, equity based examination of the project regarding induced demand and greenhouse gas emissions reduction goals; we feel that this is an academic debate and that this approach needs to managed from a macro level (all types of Metro projects) rather than a micro (Highway) level meaning there needs to be a balance in the subregion, rather than singling out the highway program, when highway capacity projects inherently attract latent demand.

So… for an over $5 billion project that would tear down hundreds of homes to expand space for car traffic, the I-5 JPA feels that Metro somehow shouldn’t examine equity, induced travel, and greenhouse gas emissions? This is by no means “an academic debate” for the hundreds of families whose homes Metro and Caltrans are planning to tear down. This is not “singling out out the highway program”; Metro agency policies – including the Metro Equity Platform – apply to all Metro projects.

Maybe it doesn’t matter what the JPA “feels,” as the Metro board already approved doing this review. Ultimately, California and national environmental laws require all large projects to undergo environmental studies.

[Note that this is a double standard. Transportation agencies would never suggest that environmental examinations do not apply to transit or active transportation projects. For example, traffic engineers insist that rail projects study, and mitigate for, places where trains cross streets and slightly delay drivers. Even for bike and transit projects, where California law has changed to no longer require environmental studies, agencies insist on quantifying impacts to drivers. But somehow the JPA feels that highway mega-projects don’t merit scrutiny.]

The letter then repeats some tired, disproven myths about benefits that no highway project has ever delivered:

What is telling here is that the JPA doesn’t even trust its own arguments. The JPA asserts that freeways are good for air quality, but also asserts that Metro should not evaluate freeway project emissions. Aren’t those air-quality-improving emissions just going to show how beneficial this project is? (No.)

The JPA letter also makes the case that it doesn’t matter if the project has public support.

Last September, the JPA was part of the Gateway Cities Council of Governments (GCCOG) push for Metro to delay the completed 605CIP environmental impact report, to develop a “locally supported alternative.”  The October Metro motion picked up that language, directing Metro staff to come up with a “locally-supported alternative.” The January JPA letter changes that tune:

As was revealed in the February GCCOG Corridor Cities Committee meeting, so far this “collaborative effort” has been entirely in closed-door meetings, with no designs shown to the public and no public input. At the Corridor Cities meeting, public comment was unanimously in opposition to the new alternative.

In Kirrin’s January 25 status report, she further critiqued public process and public support, and rebuffed the Metro board’s direction which included to “engage with… community stakeholders” in developing a report on less harmful 605CIP alternatives. From Kirrin’s report:

The “locally collaborated” alternative was an engineering collaboration between the technical teams at Metro, Caltrans, Santa Fe Springs, Downey and the I-5 JPA. The purpose of the collaboration was to agree on a technical alternative that minimizes impacts. At this point, we all concur that any less impacts would make it difficult to provide capacity and congestion relief, which is the primary goal of the freeway project. From a planning perspective, we need to start at a technical point [that] meets the project goal subregionally and minimizes impacts to our communities, which is a balance.

It’s unfair to redefine “collaboration” as a public process prior to any concept being released in an environmental document. The EIR [Environmental Impact Report] is the public process where the option of either a “build” or “no build” alternative will be recommended.

It is telling that Kirrin has read the intent of 605CIP opponents, and openly alluded to by several Metro boardmembers last September: to kill the 605CIP.

To try to kill a project prior to a public process is unfair to all parties, which is why we will push to circulate the EIR document now that the technical collaboration has been deemed satisfactory to all of us.

Kirrin claims (and similar sentiments were stated by several city representatives at the February Corridor Cities meeting) that the EIR comment process would be the vehicle for the public to give input on the 605CIP. Note that last year when Metro announced they were opening the public comment process on the then-completed EIR, they announced that there would be one meeting for public comment. Recently Metro staff committed to a EIR input process that was “a little bit more robust than one meeting” this time around.

The difficulty in this is that environmental review is a formal legal process, often more like a hostage negotiation than a collaboration. Sure, there is a high stakes “build” or “no build” decision at the end of the process… but no public agency spends tens of millions of dollars (as of mid-2020 Metro had already spent $59 million on 605CIP design and environmental clearance) preparing environmental studies for a project it doesn’t want to build.

There’s no reason for the Metro board to waste money on a costly EIR process that doesn’t have any alternatives that meet the board’s goals (as made clear in their October motion).

The time for Metro to collaborate with stakeholders – with the public – is in shaping the alternatives that will be studied in the EIR. The last Metro 605CIP public input meetings were held in 2018, and the project has changed drastically since then.

Don’t think that the I-5 JPA is not concerned with what the public thinks, though.

At recent I-5 JPA meetings, including yesterday’s Administrative Entity meeting, the JPA is pursuing setting up a $30,000 “public outreach campaign.” The goal of the program is not to seek public input to shape the 605CIP, but to set up a website and a hotline that would control the public messaging around the project.

The “outreach” campaign is being contracted through the city of Santa Fe Springs (details at RFP), because if the JPA ran the campaign, it might be accused of self-dealing, as one of the likely consultants vying for the outreach contract would be South Star Engineering – where Kirrin is the CEO. Both the I-5 JPA and the GCCOG already contract with Kirrin/South Star to manage their efforts to expand capacity of the 5 Freeway.

Now that he [Dutra] represents us as a Metro boardmember, I think that we need to brief him on a recommendation to help us continue this [605CIP EIR] process, including the outreach plan that the CCC [Corridor Cities Committee] expects from Metro.

Then She again acknowledged the possibility that the Metro board could indeed kill the project:

It’s my understanding – I’m hearing from contacts that I have at Metro – that there is still concern, I’ll say, at the board level about this project moving forward at all – in terms of “why are we building freeways?” – from a very very very rudimentary standpoint – which is obviously in conflict with our position, our mission…