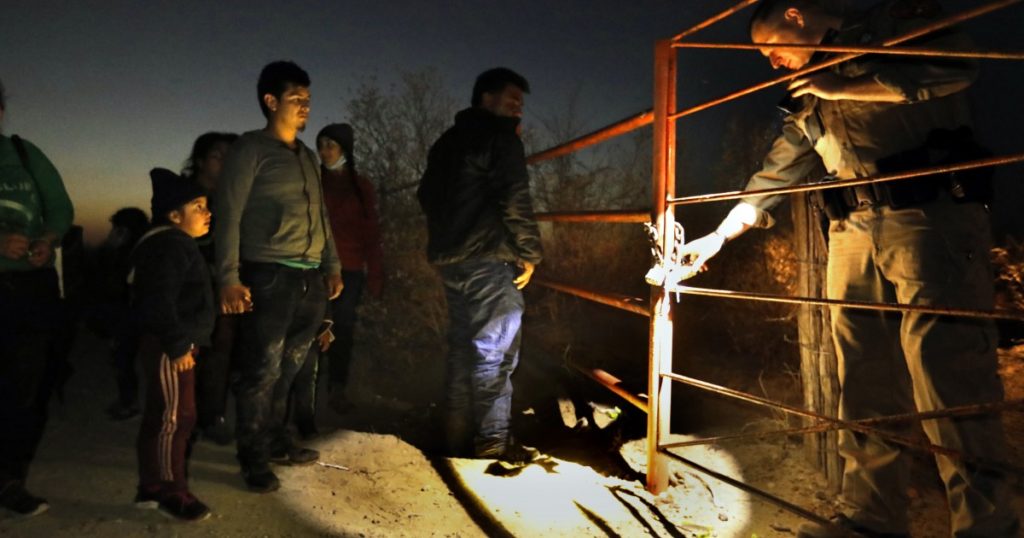 As darkness fell on the banks of the Rio Grande a few miles west of this small border town, cellphones glowed amid the reeds. Smugglers could be heard inflating rubber rafts they have been using to ferry hundreds of migrant families and youths to the U.S. along this one stretch of the river.

“Put it in the water,” they hissed at the migrants in Spanish. “Get inside!”

With border crossings from Mexico approaching a two-decade high, such scenes and sounds of migrants streaming across the water take place nightly in the Rio Grande Valley, epicenter of past migrant surges. More than 130,000 migrants have already been encountered there by U.S. Customs and Border Protection since October, more than the total for the entire previous 12-month period — 90,206.

At 8:25 p.m. Friday, the first raft of the night slid across the green river near Roma, a quick trip on still waters the length of a football field. Smugglers stopped about 10 feet offshore and began pushing a dozen migrants, some holding infants and babies, into the shallows.

Francisco Miguel Castellanos, 30, hopped out, then helped his wife to shore, carrying their 6-year-old daughter, Valeria. A trim, clean-shaven chef dressed in black and accustomed to issuing orders, Castellanos quickly took charge, leading the group up the bank and a nearby hillside, aiming for lights atop the hill he assumed were a city.

As the group picked their way through the brush, Castellanos explained why his family had left El Salvador. They were hoping to join his wife’s relatives in Los Angeles, where he knew he could earn as much in a week as he did in a month in San Salvador: $350. They were also fleeing gang violence, he said, specifically the 18th Street gang that had originated in Los Angeles and later exported violence to their homeland.

“We’re knocking on the door,” Castellanos said, hoping to enter the U.S.

The path they had chosen narrowed, hemmed in by thorny bushes, and the group had to duck low to avoid being snagged.

“Dad, this is the woods!” Valeria shouted, and begged to open her lollipop until her parents peeled off the wrapper, which they dropped in the dirt.

They also shed the plastic bracelets they had been issued by smugglers to signify they had paid for their passage. The brush around them was littered with scores of the bracelets, a sign of how many migrants have been crossing nightly.

Migrants had shed other possessions in the brush, too: empty wallets, cellphones, diaper bags, bottles, toddler shoes, powdered formula. Some items appeared to have been dropped by mistake, including Guatemalan identification cards, a teenager’s Salvadoran birth certificate and carefully folded notes wrapped in plastic with handwritten names and numbers of relatives in the U.S.

A flashlight gleamed from the bushes ahead of them, then another.

“Is that Border Patrol?” Castellanos asked. “Do we walk over to them?”

Several Texas state troopers approached, patrolling the river to assist U.S. Customs and Border Protection agents, processing the migrants atop the hill in a parking lot.

“Come on, Dad!” Valeria said as the group headed uphill.

At the parking lot, Border Patrol agents had the migrants form a line.

“Are there any youths who came alone? Any youths without parents, raise your hands,” the agents said in Spanish.

Two hands shot up. Agents asked for birth dates. One of the youths was 17, the other 13. Both were Salvadoran. As unaccompanied minors, they would be allowed to stay in the U.S. legally, placed first in federal shelters, then with relatives or other sponsors while their immigration cases were pending.

More youths would arrive later that night, including Josue Crespin Aquino, 16, who was traveling with his 17-year-old brother from San Salvador, fleeing gang recruitment so they could study to become a mechanic/pilot and chef.

“I didn’t come alone — I came with my brother,” he said, although both would be considered unaccompanied youths by Border Patrol.

The number of migrant youths crossing the border alone has spiked recently, overwhelming crowded holding areas on the border, especially in the Rio Grande Valley, where a Border Patrol tent facility intended to house 250 during the pandemic instead held nearly 4,000 migrants over the weekend, according to Border Patrol figures reviewed by The Times. At least 600 youths had been held by the agency for more than 10 days.

Rafts crossed the river all night and into the following morning, transporting 162 migrants, according to law enforcement patrolling the area on foot and with a drone that hummed steadily overhead.

“In 48 hrs, agents arrested 369 illegal aliens mainly consisting of family members and UACs in 4 separate groups. This year, agents have encountered 19 groups of 100 or more people illegally entering the US.”

Alejandro Mazanares, 16, said he persuaded his parents to let him migrate alone from Honduras to join his 30-year-old brother in Miami, who he said crossed the border illegally years ago.

“I decided for myself because the situation in Honduras now is so bad,” Mazanares said as he walked up from the riverbank after crossing on another raft. “My parents don’t have enough to eat. You can’t survive. I explained to them there’s no work there; there’s so much crime. They were sad, but they accepted it.”

Groups of youths as young as 12 traveling without adults said they had fled El Salvador to avoid being recruited by gangs. They hoped to join relatives in Houston, they said.

Some families brought babies as young as 8 months. A family who arrived with an 11-month-old and a 5-year-old hoping to join relatives in Los Angeles said they initially tried to cross the river without a smuggler, but smugglers caught and kidnapped them. They were held for three days without food, they said, with the smugglers sending photos of their baby girl to their family and friends back in Guatemala threatening to kill the baby first if they didn’t pay more than $7,300 for the family’s safe passage. A friend in Guatemala ultimately sent the money.

“Mexico is hell,” Rubi Hernandez Ramos, 22, said as she climbed the hill shortly before 1 a.m. to turn herself in to Border Patrol and seek asylum. “The criminals treat you like animals. They just want money.”

The number of migrant families crossing the border has increased in recent months, but not all families are allowed to stay in the U.S. Some are released with electronic ankle monitors and ordered to report to immigration court. Others are deported daily to Mexican border cities.

Since the start of the coronavirus pandemic, the U.S. has been deporting migrants without allowing them to apply for asylum in the U.S., a policy the Trump administration started and that President Biden has continued. For the last month, the Mexican state opposite the Rio Grande Valley, Tamaulipas, has refused to allow U.S. immigration officials to return many families with children under age 7. But it’s not a firm rule, migrant advocates said, and some are still deported.

On Sunday, Homeland Security officials released a statement saying that to speed processing, some migrant families who Mexico refused to allow back in were now being released in the Rio Grande Valley without immigration court paperwork. “All families, however, are screened at the Border Patrol station, including the collection of biographical and biometric information and criminal and national security records checks,” the statement said.

On Friday night, agents loaded migrants into vans and took them to a nearby station, where they issued children bracelets listing their ages. They stayed the night, and in the morning Castellanos and his group were loaded into vans again and dropped at the border bridge to Reynosa, Mexico.

They had been deported. No one told them why, he said. Other migrant families were already camped at the foot of the bridge and in a nearby park’s gazebo, having been deported during the last week.

Most families said they had paid about $6,000 each to be smuggled from their home countries across the U.S. border.

Castellanos wasn’t sure what to do. He didn’t know of any shelters in Reynosa, which is notorious for cartel violence, including migrant kidnappings, extortion and slayings.

By Sunday, he had vanished, no longer answering his phone.

By that afternoon, the crowd of deported migrants camped on the Mexican side of the Reynosa bridge had grown to several hundred. They were easy to spot, many still clutching plastic property bags labeled U.S. Customs and Border Protection. Most had children age 7 and over. Some were pregnant. Many were unfamiliar with Reynosa’s reputation as a cartel hub. But those who had been dropped there days before said they had learned fast: At least one woman had tried to take a taxi to a friend’s house, been kidnapped and raped, they said.

Delmiy Paz, 39, said that when the victim tried to report what had happened to Mexican immigration officials at the bridge, “They said she should go back to her country, and she left.”

Many of the migrants didn’t have money or phones — they had lost many of their belongings near the river. Some had not eaten in days or showered in a week, afraid to leave their makeshift camp. Some had children under age 7 at home, and said they would have brought them if they had known it would more likely allow them to stay in the U.S.

“If I bring my 3-year-old, will they let me cross again?” said Juana Nicolas, 35, a single mother of six who fled Guatemala with her eldest, 16-year-old Hilda, after the girl was threatened by local gangs.

Jenny Orejana, 28, was deported Sunday with her daughter Alicia the day after they crossed the river. They sat, dejected, near the bridge, Alicia still wearing the bracelet Border Patrol had issued her showing her age: 7.

Orejana had no money or phone. Instead of joining friends in Philadelphia, she was stuck, resigned to returning to Honduras, but unclear how she would get there. She said her friend who had migrated to the U.S. with her 4-year-old daughter had also been deported in the same week.

“We all came with dreams,” Orejana said.

Others wondered aloud about sending their children across the border alone. If they crossed alone, the U.S. would have to allow them to stay, the migrants knew. They had seen Border Patrol separate unaccompanied youths at the river.

Hermelindo Ak, 42, who was deported with his 16-year-old son, Alexander, last week, said he had sold his land to pay a smuggler and had to find a way to support his other nine children back in Guatemala. He had no plans to return home.

“Tell your president to open the door and give us an opportunity to enter,” he said.

During the last migrant surge in 2019, a similar cluster of migrants developed to the east in the border city of Matamoros. The tent camp of thousands lasted for years, to the chagrin of the Mexican government. Biden faulted Trump over the camp during a presidential debate, and last month the camp was closed after U.S. officials finally admitted many of the migrants.

Now, it appears deported migrant families are forming a new camp in Reynosa.