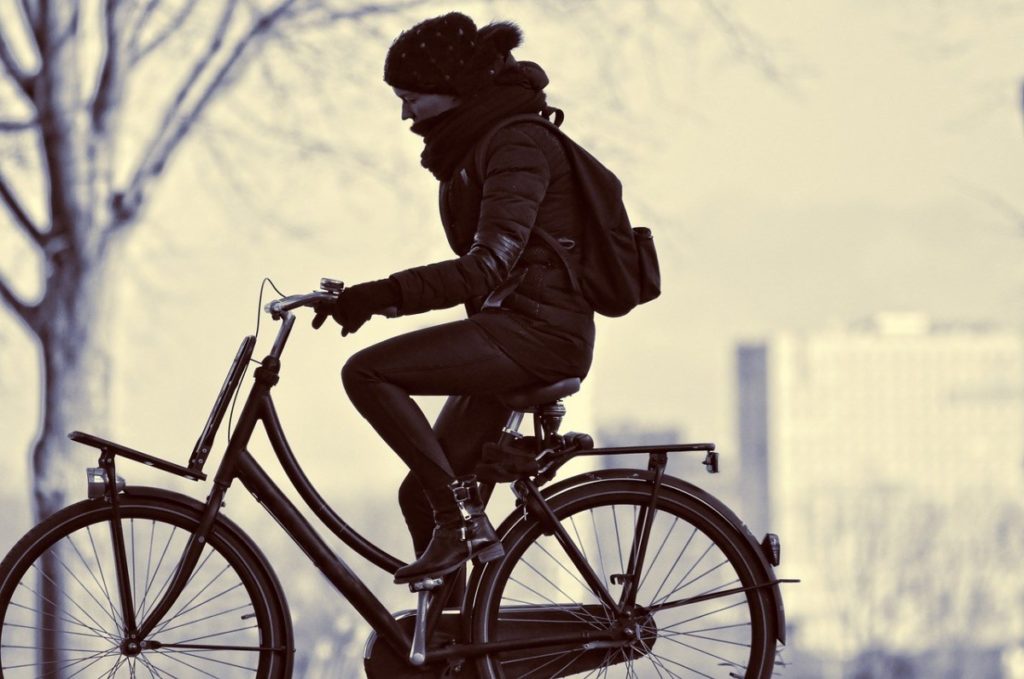 To keep pandemic-prompted cycling rates high through the winter, we need to think beyond the bike lane snowplow and start centering the needs of women and gender-variant riders, a recent panel of experts argued.

During a session at the 2021 Winter Cycling Conference, professionals and advocates from around the world called for policies and infrastructure with the needs of underserved riders in mind — especially when it starts getting cold and dark outside.

“There’s a tendency to assume that policy and planning are neutral,” said Angela van der Kloof, strategic adviser at the mobility firm Mobycon. “We count numbers of people on bikes, number of trips. … But behind these numbers are many assumptions. Are we planning for commuters, or for all kinds of trips? Are we planning for people who feel safe riding alone, or for families, or those who feel safer riding with a friend?”

Those questions have perhaps never been more urgent than during the COVID-19 pandemic, which has frightened commuters off buses and trains and ushered in an explosion of new riders on streets around the world — many of them women and nonbinary people who had never travelled on two wheels before. One presenter from the automated bike counting company Eco-Counter noted that U.S. cycling rates are were up 23 percent in December of 2020 compared to the same month in 2019, but municipalities have not always adjusted their infrastructure or policy goals to reflect the needs of those new riders.

During the long, cold nights of winter, those oversights can translate into even steeper barriers. The panelists reminded audiences that in addition to the near-universal fear of traffic violence, women and nonbinary cyclists in countries often fear sexual harassment, assault, or rape when they set out to ride— and planning and policy can play an important role in mitigating those dangers.

“My city is known internationally as a very bicycle-friendly place — and it is, if you look at things like traffic safety and bicycle parking spaces,” said Maartje de Goode, a social designer and researcher based in Utrecht, Netherlands. “But we have our fair share of dark and scary roads as well, and it’s not uncommon to hear stories in the news about lonely cyclists who were violently attacked. … Some people decide not to live in a certain area, miss out on social activities, or have to choose more expensive means of transport than the bike. Cycling alone in the dark is still a privilege.”

To help support women cyclists while learning about how to support them even better, de Goode and her colleague Lisa Strijbosch staged a demonstration project where they offered to aurally accompany female-presenting cyclists by talking to them on hands-free cell phones while they rode after dark. The effort, which the team called the “Ride-Along Phone Line,” doubled as a community engagement tool; instead of just chatting, they also interviewed each participant about how their city’s cycling network could better meet their needs.

“We don’t see it as an actual solution to the problem, of course, but a way to collect valuable information and start a conversation,” de Goode added.

When it comes to lasting solutions, several of the panelists highlighted that cities could better use the tools of infrastructure to support non-male cyclists, starting in the earliest days of the planning process. Planning bike networks around high-foot-traffic areas with lots of bystanders can make fearful riders safer, as can increasing street lighting and removing bushes near bike paths that can give cover to potential attackers.

For women with disabilities, dedicated infrastructure investments are urgent in other ways, too. Isabelle Clement of the disability-focused cycling nonprofit Wheels for Wellbeing in the United Kingdom told the story of how the COVID-19 lockdowns turned her into a year-round cyclist — but the bike paths in her hometown weren’t ideally configured to support her needs. The low profile of her hand-cycle made it hard to see potholes, especially in the dark, and bike paths weren’t always designed with the width of a cycling-adapted wheelchair in mind.

“Planners need to be thinking about the people who are the least likely cyclists: older people, the disabled, women, and children,” Clement said. “And if you think of disabled people first, in particular, you’ll often cover everybody’s needs.”

To accommodate women cyclists of all ability levels, several panelists emphasized the importance of thinking beyond pure transportation planning and reconsidering community design itself. Studies have shown that women-identified people are more likely to “trip-chain,”  or travel short distances within their own neighborhoods with multiple stops along the journey, which researchers suspect is because women are more likely to juggle unpaid care work like picking the kids up from school or handling the household errands with a traditional job. Building “15-minute cities” — and doing it specifically with the needs of people of oppressed genders in mind, can sometimes be just as helpful as building well-lit bike lanes to far-flung locations and keeping them clear when it snows.

“If you do the right types of planning, it prevents so many problems in so many ways,” said Esther van Garderen of the Dutch Cyclists Union.

The panelists were candid that they couldn’t speak to every need that women cyclists share in a single half-hour session — and it must be said the Winter Cycling Federation should have made a stronger effort to include women of color in its event. But they also emphasized that by thinking beyond our dominant gender-blind planning paradigm, cities can do far more to sustain and grow our global bike surge, especially in the coldest months.

“In order for the bike boom to continue, we have to include everyone, and that’s not just about snow clearance,” said panel moderator Becca Wolfe.