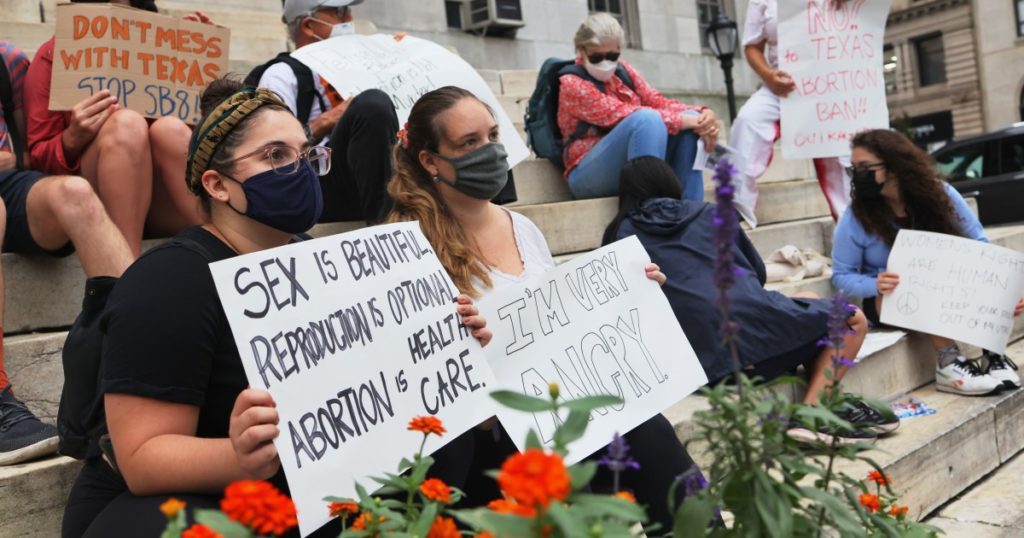 The momentous decision by the Supreme Court to allow a sweeping abortion ban in Texas to take effect has intensified one of the most fraught issues in American politics heading into the 2022 midterm election.

The shock could help Democrats motivate voters at a time the party is most worried about complacency after taking control of both houses of Congress and the presidency in the 2020 election cycle.

But it is a belated wake-up call to liberals who have been warned for years that a woman’s right to choose abortion was at risk every time Republicans captured the White House, Congress and state legislatures. And it will probably ramp up activist pressure on President Biden and Democrats to pursue more immediate action, such as overhauling the filibuster and expanding the Supreme Court.

Ever since the Supreme Court’s 1973 Roe vs. Wade decision, the abortion debate has been a political tinderbox. The ruling established a national right to abortion up until the fetus could survive outside the womb. On that basis, lower courts have halted many abortion bans passed by Republican-controlled states in recent years.

Weighing in late Wednesday just before midnight, the Supreme Court sidestepped the question of the constitutionality of Texas’ ban on abortions after six weeks of pregnancy but let the measure remain in place as procedural questions are resolved. That means that access to abortions is severely limited in the nation’s second-most populous state — and may signal further weakening of those protections to come when the court hears a case directly challenging Roe next year.

Penny Nance, president of the conservative group Concerned Women for America, said the Supreme Court’s action this week made her “cautiously optimistic” the court was willing to dismantle Roe. But she said antiabortion advocates were not yet ready to declare outright victory in the decades-long effort to roll back the decision.

“It’s not the answer to all of our prayers. Our goals are much more nuanced than changing the law. We need to change culture,” Nance said, adding she was eager for Roe to be undone so she could wage the fight to end abortion on a state-by-state basis.

Democrats painted the court’s decision as a de facto end to the protections afforded by Roe.

President Biden slammed the action as an “unprecedented assault on a woman’s constitutional rights,” vowing to launch a “whole-of-government effort” to see how his justice and health departments can ensure access to abortions in Texas, although it is unclear what administrative actions he could pursue.

The decision underscored the political consequences of another fight Democrats have been losing ground in: the battle for control of state legislatures, which will have tremendous power over abortion policy if Roe vs. Wade is overturned.

Republicans now have total control of 30 state legislatures; Democrats have control over 18. The parties share power in one state (Minnesota), and Nebraska has a nonpartisan, single-chamber Legislature.

“People a lot of time don’t think about state-level politics when it comes to abortion because Roe and the Supreme Court has been a backstop,” said Amy Fried, professor of political science at the University of Maine. “If that backstop is taken away, states can decide to prohibit abortion or limit it to a fairly large extent.”

Already, abortion has been catapulted to the forefront of the most competitive gubernatorial election of 2021. In Virginia, Democrat Terry McAuliffe had been trying to make his support for abortion rights a defining issue in his campaign against Republican Glenn Youngkin.

In a call with reporters Thursday, McAuliffe warned that GOP victories in the Legislature and in the governor’s race would mean “we could see Virginia go the way of Texas.”

Youngkin on Wednesday deflected direct questions about whether he backs the Texas ban. He pointed out that he supported exceptions to abortion bans not included in the Texas law — for cases involving rape, incest or when the mother’s life is in jeopardy.

The issue also spilled into California, where Gov. Gavin Newsom’s allies said they would use the Texas ban to motivate young people to vote against the effort to recall him. Larry Elder, the antiabortion Republican front-runner to replace Newsom if the recall succeeds, showed little appetite to draw attention to abortion rights, saying that there is “zero possibility” that California would restrict abortion access if the court toppled Roe.

Traditionally, Republicans have been more adept at using the abortion issue to galvanize their voters, although polling suggests that in recent years Democrats have increasingly been motivated to vote based on the issue. Support for abortion rights is strongest among voters with higher levels of education, and therefore resonates with college-educated women who have been crucial voters for Democrats in 2018 and 2020.

On Thursday, the asymmetrical reaction from the two parties — with Democrats in high dudgeon and Republicans relatively muted — hinted at how the two sides may approach the issue in the midterm campaign.

Corry Bliss, a veteran Republican campaign consultant, said that although abortion energizes both parties’ base, the issue will be a sideshow in a campaign the GOP wants to center on the “sheer incompetence” of the Biden administration.

“Sending a message about Biden will be the defining message of the midterms, just like in 2018, President Trump was leading the conversation,” Bliss said.

Geoff Garin, a Democratic pollster working for McAuliffe’s campaign, said the Texas law will help Democrats define the GOP as a party that is “off-the-reservation extreme in a way that makes voters, including moderate and swing voters, very reluctant to turn the keys of the Congress over to them.”

Antiabortion activists said they were undaunted by the prospect of electoral blowback.

“I would trade political wins any day to win and save the lives of unborn babies,” said Nance of Concerned Women for America. “People involved in the pro-life movement are true believers … and this is not about politics for us.”

Even if Democrats are able to use the issue to juice turnout in the midterm — an election that is typically unfriendly to the party that controls the White House — wins at the ballot box may have limited impact on the federal level, where conservatives maintain a majority on the Supreme Court and legislation to enshrine abortion rights into law would almost certainly be blocked by the filibuster.

Abortion rights groups have at times benefited from the rule that requires a 60-vote majority in the Senate; if not for the filibuster, the Senate in 2018 would have passed a federal ban on abortion after 20 weeks.

But the Supreme Court’s action this week escalated calls for expanding the number of justices on the court to counter the current conservative tilt or other changes, all of which would require an overhaul of the filibuster to be possible.

“The reality is that the threats to reproductive freedom haven’t been this dire since before Roe was decided,” said Kristin Ford, a spokeswoman for NARAL Pro-Choice America, “and it is past time to explore every bold idea and creative strategy to restore the legitimacy of the court and our democracy.”