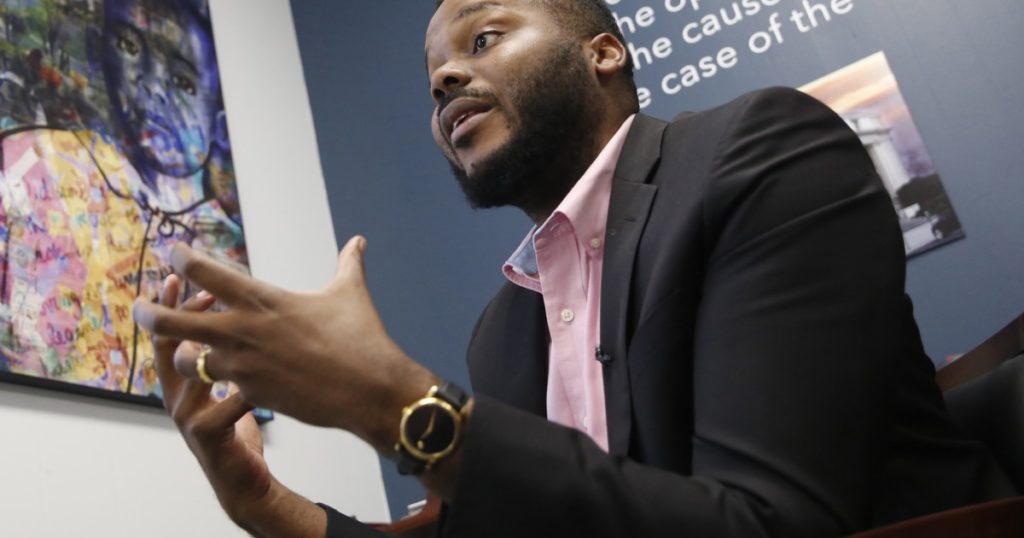 Speaking from the White House Rose Garden on Friday, President Biden took a moment to reflect on the true impact of his administration’s humongous $1.9-trillion coronavirus relief package, also known as the American Rescue Plan.

“It changes the paradigm for the first time in a long time,” he told reporters and Democratic lawmakers. “This bill puts working people in this nation first.”

Rejecting the trickle-down economics favored by Republicans since Ronald Reagan occupied the White House, Biden added: “It’s time that we build an economy that grows from the bottom up and the middle out. And this bill shows that when you do that, everybody does better.”

But what does “better” actually mean? What will happen when millions of American families teetering on the edge of financial oblivion suddenly get access to a steady stream of government money, no strings attached?

For clues, look to Stockton.

For two years starting in 2019, this Central Valley city ran one of the first and — at least, early on — one of the largest guaranteed income pilot programs in the country. The brainchild of Michael Tubbs, then the mayor and now an economic advisor to Gov. Gavin Newsom, the program randomly selected 125 residents to receive $500 a month.

There were no restrictions on how they could spend the money, which came from philanthropic sources. The only requirement of the Stockton Economic Empowerment Demonstration, or SEED, was that the participants had to live in a neighborhood in the city with a median household income of $46,000.

Fast-forward to this month. A pair of independent researchers following the program released data from the first year. Let’s just say what they found doesn’t match the absurd sky-is-falling warnings from Republicans about mass laziness and fictional welfare queens.

Turns out that most participants spent their $500 on the basics: food, clothes, shoes, utilities, auto repairs. Less than 1% of the money was spent on alcohol or tobacco.

Even more revealing, many went out and found full-time jobs, doing so at more than twice the rate of a control group of residents who didn’t receive monthly allotments. Participants also reported feeling less anxious and depressed, leading to “statistically significant” improvements in their emotional health and overall well-being, researchers found.

So, what does this have to do with the American Rescue Plan? Well, under it, the child tax credit has been revamped to work a lot like guaranteed income.

Parents who had been receiving $2,000 per child under the previous child tax credit will now get as much as $3,600 — and it will come in monthly allotments rather than as a once-a-year lump sum. More parents qualify for the credit too. And it doesn’t matter if they are employed or unemployed.

Experts say the expanded tax credit could cut the nation’s child poverty rate — now at 14% — in half.

Tubbs predicts it could do much more than that.

If the parents use their new windfall the same way Stockton residents used their guaranteed income, it might finally put to rest the long-held notion that providing money to people with no strings attached will remove the incentive to find work and lead to dependence on the government dole and more single-parent households.

Unsurprisingly, this is the exact argument Republicans have been using to try to skewer the American Rescue Plan — and have long used against guaranteed income even as more cities, from Gary, Ind., to Compton, have launched pilot programs.

Sen. Marco Rubio of Florida, who wants to tie the newly expanded child tax credit to a work requirement, has called the law “corrosive” and “not pro-family.”

“If pulling families out of poverty were as simple as handing moms and dads a check, we would have solved poverty a long time ago,” he wrote in a recent op-ed for the National Review.

Other Republicans, trying to figure out a way to assail a law that polls show is widely popular with Americans of all political persuasions, have been calling it a “massive expansion of the entitlement system” and “a socialist agenda.” House Minority Leader Kevin McCarthy of Bakersfield denounced it as “a liberal pipe dream that predates the pandemic.”

Or as Rubio also wrote: “A government check can never replace the ability to earn high wages and fulfill the American promise that if you work hard and live responsibly, you and your family will flourish.”

As if working hard is any guarantee of earning enough to flourish. On this, Tubbs and I agree.

“A lot of people talk about the dignity of work,” he said. “But I would argue that dignity is attached to one’s humanity before it’s attached to work because I just don’t think we treat people in dignified ways in the workplace.”

We’ve all known the stories of essential workers during the pandemic. Many live paycheck to paycheck and, for a year now, have put their lives at risk to work minimum-wage jobs where there is a constant threat of exposure to COVID-19.

Tubbs likes to talk about one participant in the Stockton Economic Empowerment Demonstration who was among those able to use money to take unpaid time off from his part-time job to interview and get a new, full-time job. What he valued wasn’t so much the higher salary but the freedom that came along with it to be a more present husband and parent.

“It’s so wild that people literally work themselves to death in this country. Work all day and have no time for the people they’re working for because they’re working and still can’t pay rent. Like that just is so bizarre to me,” he said. “And I hope guaranteed income is a way for us to evolve as a society into valuing what I think are the most important contributions we make as people — as a partner, as a parent or as a neighbor in our relationships with each other.”

The expansion of the child tax credit is temporary. But Democrats want to make it permanent in 2022.

That’s exactly the kind of paradigm shift we need.