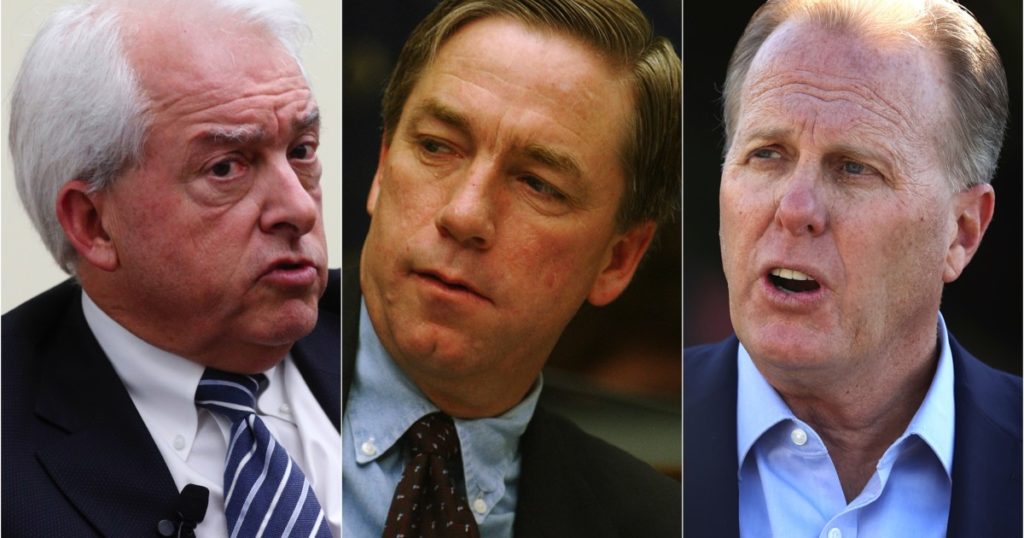 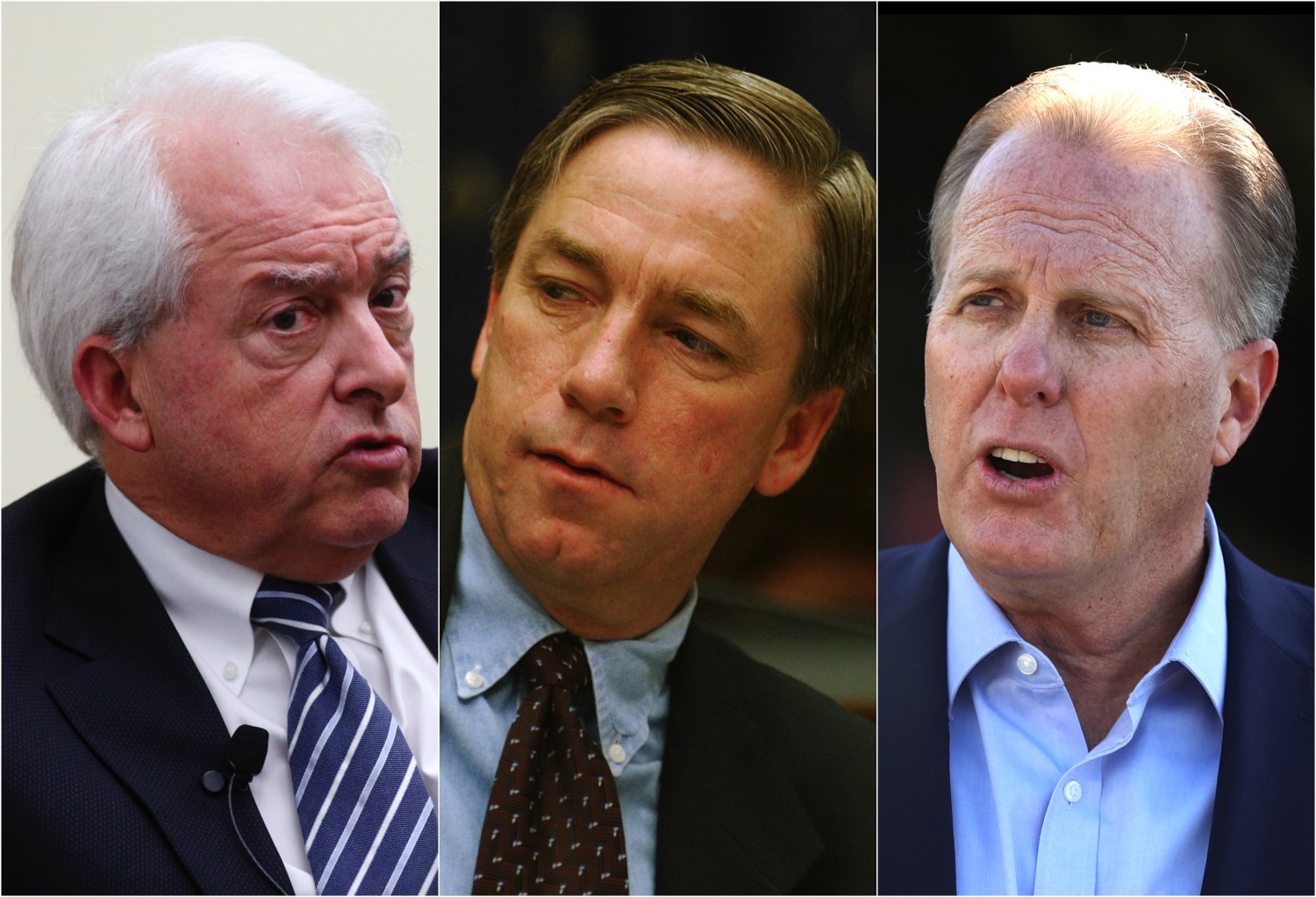 Even before the attempt to recall Gov. Gavin Newsom officially qualifies for the ballot, Republicans hoping to replace him are in full campaign mode.

The trio of notable Republicans running are not well known among the state’s voters so they are refining their message, raising money against an incumbent who will have limitless resources, figuring out how to deal with former President Trump and trying to define themselves in contrast to their GOP rivals while also focusing their fire at Newsom. Sometimes, that has devolved into sniping at one another.

“It’s perhaps the one shot Republicans actually have of winning the governorship in a while because of the structure of the recall,” said Jack Pitney, a political science professor at Claremont McKenna College.

The last GOP governor in California was Arnold Schwarzenegger, who was elected during a 2003 recall and then reelected in a general election in 2006. The three top Republicans who hope to follow his path to office are former San Diego Mayor Kevin Faulconer, former Rep. Doug Ose and businessman John Cox.

Though the bar is lower, winning the recall election is still complicated. A Republican candidate needs more than 50% of those casting ballots to vote to oust Newsom, and must consolidate the support of GOP voters while reaching out to center-left independents and Democrats.

Jon Fleischman, a conservative Orange County activist who is not aligned in the race, warned that candidates must be careful as they hone their message, calibrating how much to attack Newsom versus their fellow Republicans.

“I understand the need to differentiate yourself from another candidate. But at the end of the day, I think the Republican who fares best will be the one who demonstrates they can take on Newsom,” former state GOP official said. “The oldest rule is you’ve gotta build up yourself before you beat up other people.”

Democrats dominate politics in California, but the rules governing recall elections mean a candidate can be elected governor with far fewer votes than in a traditional election.

The recall is expected to qualify for the ballot after county elections officials finish validating signatures this month. Voters will be asked two questions: Do they want to recall Newsom, and if the governor is recalled, whom do they want to replace him? Newsom cannot appear on the replacement ballot.

All polling to date shows fewer than 50% of voters want to recall Newsom, making the second question moot. But the election is months away and anything is possible.

In a normal election, candidates compete in a jungle primary, with the top two vote-getters moving on to compete in the November general election. Then the candidate who receives more than 50% of the vote wins the seat.

That has become increasingly out of reach for Republicans as the state has grown more liberal in recent years. The last time the GOP won a statewide election was in 2006 for governor and state insurance commissioner. Democrats currently have a 22-percentage-point registration edge over Republicans.

In a recall election, however, the replacement could get picked with far less than 50% of the vote. That’s because it’s a one-step election that will probably attract scores of candidates, so the top vote-getter wins regardless of how few votes they earn.

Conservative San Diego radio host Carl DeMaio warned that the task ahead for Republicans is daunting.

“We’ve got to recruit volunteers and say, ‘Look, the signature drive was hard. That’s going to be a cakewalk compared to the next part,’” he said.

A Republican’s chance would be boosted if no prominent Democrat runs to replace Newsom. While there are reports of Democrats polling, calling donors and weighing their options, none has entered the race yet.

Among Republicans, Faulconer is trying to position himself as the presumptive front-runner, rolling out the longest list of endorsements, highlighting his ability to get elected in a Democratic city, publicly ignoring his GOP rivals and focusing his fire on Newsom.

Last week, he held an event in Bakersfield criticizing the state’s unemployment system, which Californians have struggled to access during the COVID-19 pandemic while billions of dollars have been stolen through fraudulent claims. Earlier, he criticized Newsom on his response to the pandemic, homelessness and school reopenings.

John Burke, a Faulconer spokesman, said the campaign is aimed at uniting GOP voters behind the former mayor.

“Our focus is on highlighting an alternative to Gavin Newsom’s failures, not on attacking fellow Republicans,” he said. “For this recall to succeed, we need to consolidate behind the only candidate who is capable of securing this historic opportunity for Californians demanding change.”

State GOP officials withdrew a proposal to modify their endorsement process earlier this year because party activists viewed it as a power grab designed to benefit Faulconer.

Faulconer’s establishment bona fides have faced criticism from fellow Republicans who argue he is not as conservative as he claims. DeMaio, a former San Diego City Council member, called Faulconer “Meg Whitman without the money and without the lipstick,” referring to the unsuccessful 2010 GOP gubernatorial nominee who spent a record-breaking $144 million of her own money on her run.

Businessman Cox, who badly lost the gubernatorial race to Newsom in 2018, kicked off his campaign attacking Faulconer.

Cox released a 30-second ad called “Gavin Faulconer” that paired allegations of Faulconer pushing a real estate deal that benefited a donor with news coverage about Newsom dining indoors with lobbyists at an exclusive restaurant as he urged Californians to avoid social gatherings because of the pandemic.

“Had enough of this?” Cox says. “I’m John Cox. I’m a businessman, not a politician.… It’s time for a fresh start.”

Cox recently lost several aides over disagreements about the campaign’s strategy. A GOP advisor familiar with Cox’s campaign said the split was partly because of Cox’s fixation — “almost an obsession” — on Faulconer.

“You can focus on the other opponents, but the fact is you also need to identify and define yourself to an electorate that doesn’t know you well and contrast that to Gavin Newsom,” said this strategist, who would discuss the campaign candidly only if given anonymity.

Cox took issue with the idea he was attacking Faulconer; he argues that he is merely pointing out that Faulconer, like Newsom, is an insider.

“I’m the outsider. I’m the guy that’s going to get things done,” Cox said, criticizing Newsom and Faulconer as beholden to their donors. “People are sick of that. They want an outsider. They want someone that’s actually going to address these issues.”

Former Rep. Ose is the most recent notable entrant in the race. He said he is still building his campaign team and plans to attack Newsom while contrasting himself with the other Republicans on the ballot.

“I think voters are looking for someone with a successful track record in both the private sector and the public sector, and I’m the only one who has that,” Ose said. “I think the entire recall is a referendum on Gavin Newsom, and it needs to focus on that. He has an abysmal record over the last two years that gives every Californian concern about where the state is going.”

Ose and Cox are independently wealthy. It’s unclear how much they will donate to their efforts. Cox has contributed $2 million of the nearly $2.5 million his campaign has reported raising to date. Faulconer has reported raising $1.4 million. Ose’s campaign committee has not yet had to file financial disclosures.

A looming question is whether Trump weighs in. While he is detested by California voters overall, he is extremely popular with the state’s GOP base. Although Trump lost the state in 2020 by more than 5 million votes, he did win the support of more than 6 million Californians.

All the GOP candidates supported the former president to varying degrees. Ose served as a state chair for Trump in 2016. Cox was endorsed by Trump in his 2018 gubernatorial bid. Faulconer spoke out against the president in 2016 but voted for him in 2020 and posed for a picture with Trump in the Oval Office.

The field could be upended if Richard Grenell, a member of Trump’s administration who is popular with the president’s supporters and donors, enters the race. He strongly hinted he is considering a bid during a speech at the Conservative Political Action Conference this year.

While Trump has not yet weighed in, his son made clear that a loyalty test is in play.

After Faulconer demurred when asked whether he wanted Trump’s endorsement in the race, Donald Trump Jr. tweeted, “I think it’s safe to say if he won’t say that he wants it that he likely doesn’t deserve it.”