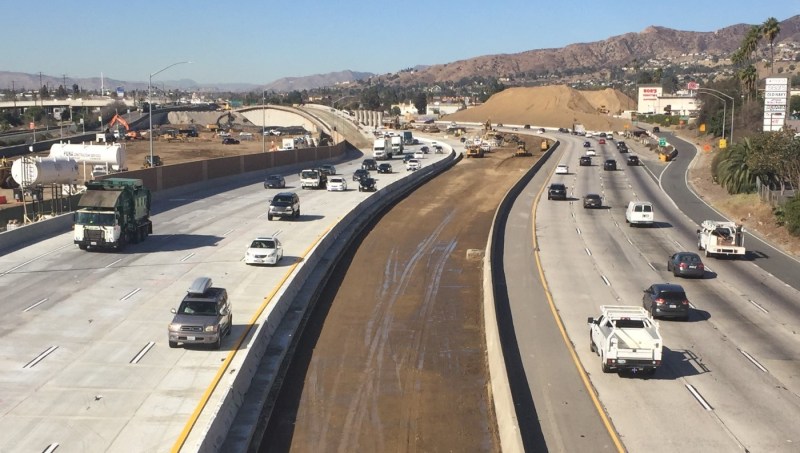 How many times have you heard a California transportation official say “we can’t keep widening freeways,” just before they talk about the latest “gap closure” or “ramp realignment” project they’re boosting, SPUR’s Nick Josefowitz asked of a panel on how state and local transportation agencies might finally kick the freeway widening habit. “And when are we going to stop seeing Environmental Impact Reports (EIR) where Caltrans claims widening brings relief from congestion reduction and Greenhouse Gas emissions?”

“There’s a long lead time of developing in transportation projects,” said panelist Darwin Moosavi with the California State Transportation Agency. “But you’re going to see EIRs that say that for a long time to come… However, moving forward, there will be a pretty major shift in what those EIRs look like.

The problem, said the panelists, is the entire government is wrapped around freeway construction–Caltrans, Metro in Los Angeles, MTC and the Alameda County Transportation Commission, are all intertwined with a massive bureaucracy geared towards freeway construction. So just knowing that freeway widening is pointless and destructive isn’t enough.

“Do we have the government structure to change? I don’t think so. Our government structure was built around the car,” said Hasan Ikhrata with the San Diego Association of Governments (SANDAG). “We really need to come to terms with the fact that adding capacity to freeways does not solve congestion. That’s been proven. Period. I’m shocked people still debate that.”

The way Ikhrata explained it, it’s going to require a huge political shift to realign these agencies to be more transit-focused. Otherwise, they’ll just continue to do freeway “realignments” or “fixing interchanges” even if they can be stopped from “widening.” The fundamental problem is, as he put it, that the state has so under-invested in transit and over-invested in freeways for so long that it’s now hard to convince people transit can ever be comparable. “A trip that takes 10 minutes in a car takes three hours on transit. You shouldn’t expect people to take it.”

Often it’s faster to bike than take transit. “My son he’s in college. He’s in the Bay Area for the summer, trying to find a job, and he only has a bike,” said Tess Lengyel, head of the Alameda County Transportation Commission (ACTC). “To get to that job would be an hour on the bus.” The bike would be much faster, she explained, but the ride doesn’t feel safe, thanks to poor bike lane connections.

Ikhrata said the state has to find a way to fund extremely high-quality transit so people want to use it and then want to fund more of it. “It has to be fast, clean, and electric,” and even underground, he said, all to assure transit is speed-competitive with the automobile.

But Lengyel reminded the panel that, in the Bay Area at least, the work to change that has been going on for some time–certainly longer than in L.A. or San Diego. “Building BART was really hard,” she said. “And I can’t imagine the Bay Area without BART.” BART is fast and reliable enough that people in the Bay Area can imagine desirable alternatives to driving. That also means they’re more willing to vote for and fund the expansion of such alternatives. “Let’s learn from the positive as well.”

Still, as Streetsblog pointed out in the Q&A, even in the Bay Area “gap closures” and other such euphemisms for freeway expansion continue. Take the one being designed by Lengyel’s own agency, along with Caltrans: the Oakland Alameda Access Project. That project is going to widen and lengthen the Oak Street off ramp of I-880 and realign other ramps to increase car capacity through the Webster and Posey tubes. The “access” project also includes the removal of a sidewalk between Chinatown and Jack London Square to make more room for cars. It does, however, have a few disjointed, mostly painted bike lanes and some funds for a study for a ped-bike bridge over the estuary thrown in to make it seem less like a freeway expansion project.

Lengyel said there’s a lot of opinions on that project, adding that they’ve “…been working over 20 years to get a project built.” She stressed that the removal of the Broadway off ramp through Chinatown (required as part of the ramp reconfiguration to increase car capacity between Alameda and I-880) is “…an important equity project through Chinatown.”