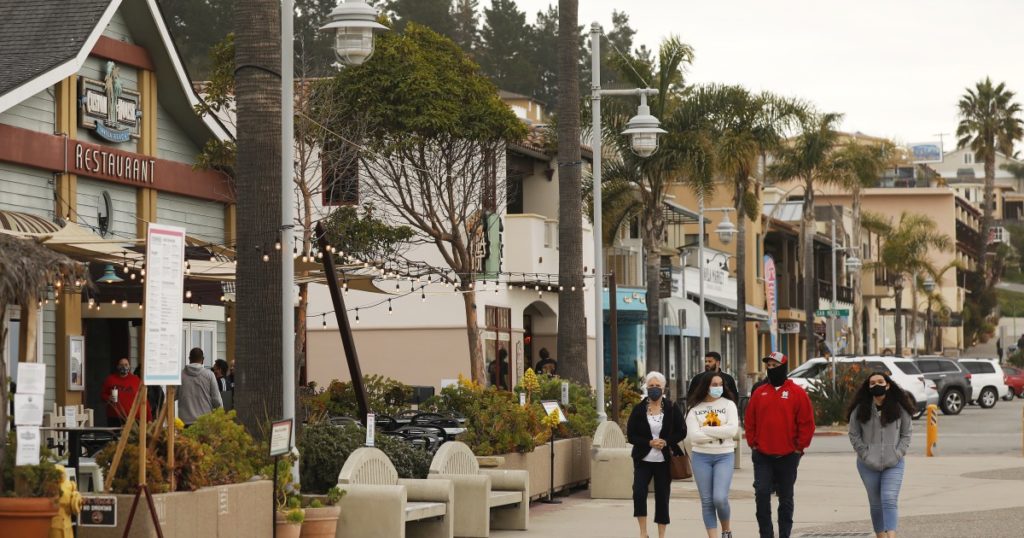 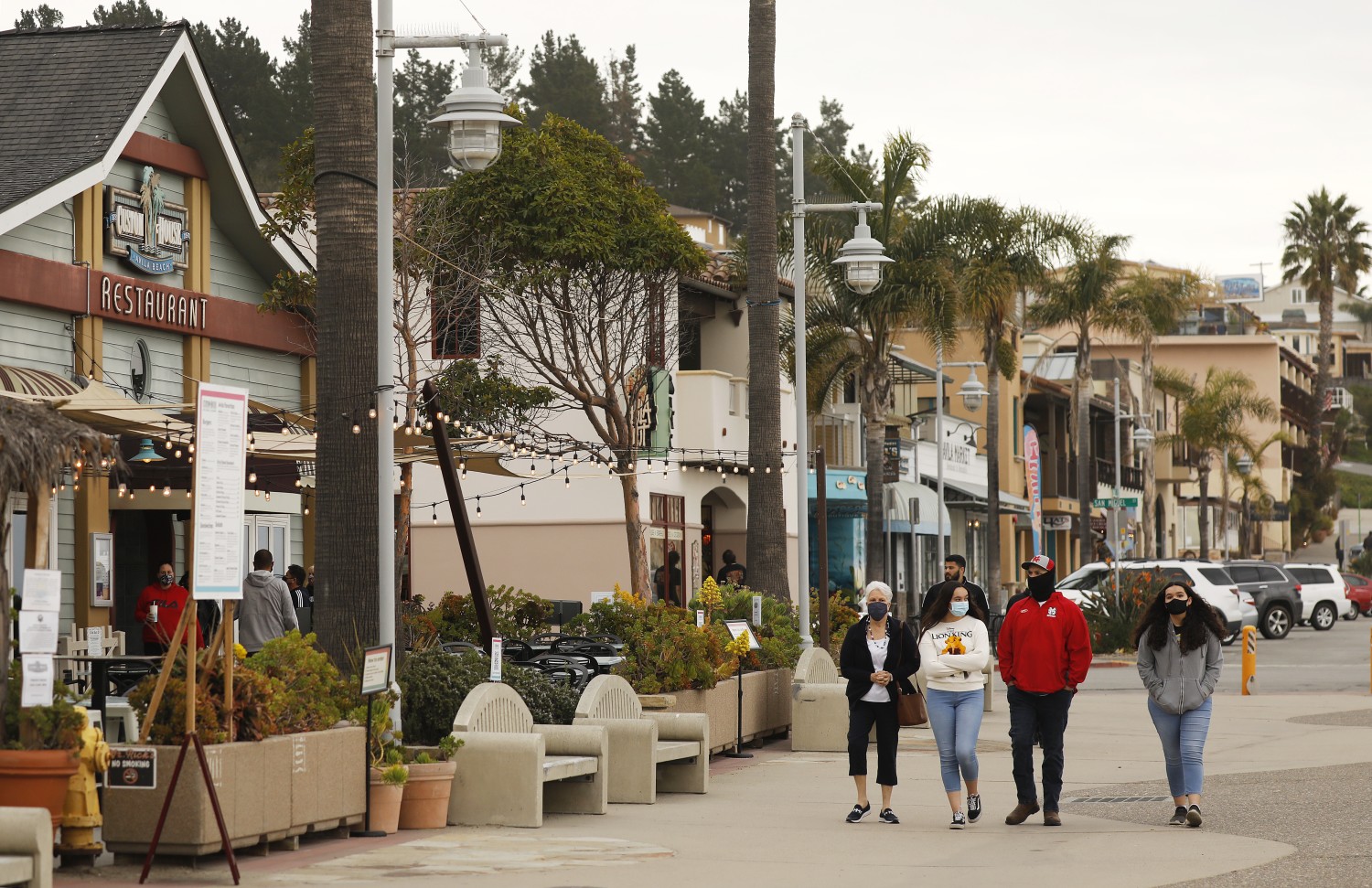 But despite personal gains, Pease couldn’t shake the feeling of guilt when talking to neighbors who struggled to run restaurants and small businesses throughout San Luis Obispo County. When the opportunity came to back a recall petition to oust Gov. Gavin Newsom, the lifelong Democrat signed his name.

“Our mindset here is, because we’re so isolated from other metropolitan areas, we take care of each other. We create our own economy,” said Pease, 37. “Even though I’m a Democrat and blue, we don’t like to be told what to do here.”

In a county where Democrats slightly outnumber Republicans — by about 6,000 voters, according to state data — residents delivered a sizable chunk of signatures to the statewide recall effort to oust the Democratic governor. Out of every 1,000 voters in San Luis Obispo County, 139 signed their names on the recall petition — for a total of 25,653 valid signatures, according to the secretary of state’s office. Recall backers gathered, in all, about 1.6 million signatures.

“I considered San Luis Obispo to be kind of a liberal stronghold. … But when you look at the population that signed the recall, you have to realize it wasn’t all Republicans who came out to sign the recall,” said Orrin Heatlie, leader of the statewide recall effort. “We have people from all walks of life, the entire political spectrum. … We have lifelong Democrats who voted for Newsom actually go the extra mile to get this.”

San Luis Obispo is a political mixed bag, with roughly 70,000 registered Democrats, 64,000 Republicans and 38,000 unaffiliated voters. In the 2020 election, voters in the county favored Joe Biden by 13 points over President Trump, but previous presidential race margins were decidedly slimmer for Democrats. The county last voted for a Republican president in 2004, when then-President George W. Bush won by 7 points.

Assemblyman Jordan Cunningham (R-Templeton) called his district “purple,” noting that Newsom eked out a 3-percentage-point win in the county over his Republican opponent, John Cox, in the 2018 gubernatorial election.

“SLO County voters, they’re educated. … They’re very smart voters; they’re going to figure it out and do the research,” he said, pointing to Newsom’s handling of the pandemic. “I think a lot of people just lost faith that this governor was making decisions actually based on science and with due regard to local circumstances. Once they lost faith in that, it’s very hard to go back.”

The recall effort, led by a trio of political novices, sprung from grass-roots origins. In San Luis Obispo County, a network of volunteers spread across more than 3,600 square miles banded together to round up signatures.

When Jennifer Grinager first began volunteering for the recall effort, she heard from many people who wanted to help but didn’t know where to go. Local organizers were running weekly sign-up booths, but they lacked an email list or cohesive social media effort, she said.

“It was just kind of … fly by the seat of your pants,” Grinager said. “They were doing everything they could, but the need was so overwhelming, and they didn’t really have enough people.”

Grinager, a registered Republican, previously showed minimal interest in politics, filling out her ballot with the help of a voter information guide. But she said she grew incensed by the governor when he signed an executive order instituting a moratorium on capital punishment, a move that appeared to contradict the will of California voters. And as a mother of a child with special needs, she was particularly upset by how long children were kept home from school. Toward the end of the year, Grinager made it her “singular focus” to rally for the recall, she said.

She set to work knocking on doors, running signing events, picking up petitions from local businesses and spending at least an hour a day on the recall effort — more on weekends. The campaign picked up steam, and at one weekend signing event, Grinager said she calculated that the volunteers had collected one signature per minute.

“We saw a governor who was behaving unconstitutionally as a dictator, and he needed to be stopped,” she said.

But a quieter, more moderate group of people makes up a portion of the movement’s ranks.

A self-described “right-leaning centrist,” Aaron Bergh watched previous recall attempts targeting Newsom but said he considered them extreme. The owner of Calwise Spirits Co. reluctantly complied with the March 2020 shutdown, thinking it would be temporary. When the pandemic continued, he adapted by setting up outdoor service.

Then, one day in late summer, as smoke from nearby wildfires and oppressive heat cloaked the county, Bergh received an email from the California Division of Occupational Safety and Health recommending not to work outside.

“I can’t be inside either — this is lunacy!” Bergh said. “I can’t keep my business fully closed.”

When a volunteer came by with a recall petition, he decided: “Now’s the time.” After signing it, he kept a stack of petitions behind the counter to hand to any customer who complained about being unable to sit inside.

“I always think, ‘What’s the solution?’” Bergh said. “If the customer’s not happy, what’s the solution…? Being open. How do we do that? Well, we recall the governor who is making decisions that don’t make sense.”

Several openings and closures later, Bergh had collected a couple of hundred signatures.

A turning point for many San Luis Obispo County residents came in December, when the state replaced the color-coded tier system for closures with a regional stay-at-home order, which was triggered when an area’s ICU bed availability dipped below 15%. The previous system allowed for counties to reopen based on their coronavirus case rates.

San Luis Obispo County was placed in the same region as 10 other counties, including more densely populated areas with higher case rates such as Los Angeles and Orange counties. Though Los Angeles hospitals quickly filled intensive care unit beds, there was only one COVID-19 patient in a San Luis Obispo ICU on Dec. 1.

“Why are we getting punished?” Bergh said. “We live three hours north of Los Angeles; this doesn’t seem fair.”

The decision frustrated so many business owners, Bergh said, that more than 100 organized in an attempt to reopen Paso Robles.

Central Coast coronavirus numbers eventually rose during the holiday surge — at its peak on Jan. 31, 19 COVID-19 patients were in county ICUs — but not before elected representatives from San Luis Obispo, Santa Barbara and Ventura counties begged the state for their own, separate region.

“There was a very urban county focus on the statewide orders, and there wasn’t enough consideration given by the state public health [department] and by Gov. Newsom of what the local conditions were in the more rural, remote counties,” said Cunningham, who introduced legislation to limit the governor’s ability to enact laws during a state of emergency. “We just weren’t facing the same kind of problems.”

After months of distancing himself from the recall effort, Cunningham publicly threw his support behind it in December. He has since endorsed Republican Kevin Faulconer, the former San Diego mayor who is running to replace Newsom.

“I get it; people are overwhelmed,” San Luis Obispo Mayor Heidi Harmon said. “I see this a lot at the local level too. People just want to be mad. That’s just COVID.”

Harmon, who has received a torrent of personal attacks and sexist criticism since being elected in 2016, said it was easier to blame the person in charge than to understand complex underlying issues driving policy decisions.

Though Harmon said she sympathized with voter frustrations over Newsom’s attendance at a birthday party held at the tony French Laundry restaurant in Napa Valley amid COVID-19 restrictions, she listed what she considered Newsom’s accomplishments: a budget surplus that could give some Californians tax rebates and California’s position as a state with one of the country’s lowest coronavirus case rates.

“You hear his opponents accusing him of being an ‘it boy,’ and I think a lot of those attacks are disappointing to hear,” she said. “That kind of almost objectification of the governor is such a shallow accusation to make at him when he’s done some really substantive things.”

Rita Casaverde, chair of the San Luis Obispo County Democratic Party, pointed to the area’s relatively low coronavirus numbers as a direct result of the shutdowns. Elected leaders were making the best decisions they could with the little developing science they had on hand, she said.

Casaverde brushed away the idea that Democrats supported the recall effort, saying they were probably misinformed, and pinned it on Republicans.

“It’s very typical [that] the Republican Party will not look back and accept that they were wrong. They will not accept that COVID-19 was an actual crisis,” Casaverde said. “They just continue on with their talking points.”

With restrictions lifting, Casaverde said she hopes voters will remember that the election is about not only the pandemic but also the environment, immigration and housing policies.

Now, “the million-dollar question,” as Bergh calls it, is whether the shutdown-fueled furor that led some to sign the recall petition dissipates by the time an election rolls around in the fall.

“The public in general has a relatively short-term memory,” Bergh said. “If the restrictions were removed, they might not remember when they go to the polls.”

For Pease, the recall effort has already reached its intended goal.

“Part of me signing it was just [that] I supported putting pressure on [Newsom] to consider how his policies during the shutdowns were really difficult on small businesses,” he said. “In the end, I don’t necessarily believe it would actually lead to him being removed from office.”