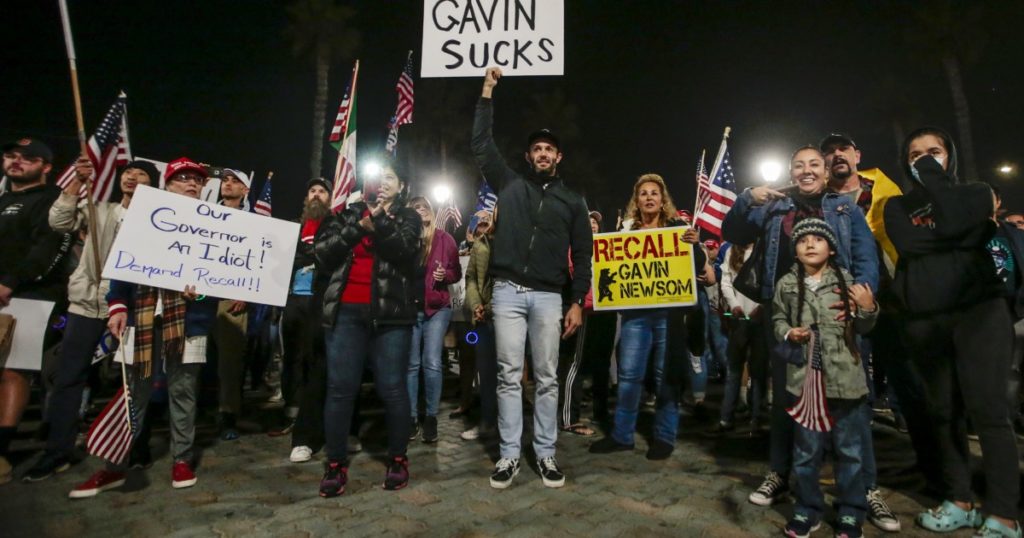 In this year, the lack of mask being worn and outright disbelief about the severity of coronavirus are hallmarks. In all years, the overwhelming whiteness of the crowd in an Orange County that has been majority minority for nearly a generation.

And anger, anger — so much anger.

The protests happen so much that the city’s tourism website should list them alongside surfing and volleyball under “Things to Do.”

But I still swung by on Sunday night to catch the latest one. The source of ire this time? A statewide mandatory 10 p.m. curfew issued to try and stave off more coronavirus infections. About 400 people showed up to the usual stomping grounds on Saturday night to protest and take back liberty from the man they call “Gruesome Newsom.”

I expected the same party on Sunday, but it was a far more subdued affair: No more than 40 bundled-up folks stood in the clear night to the approving honks of traffic on PCH. Equal numbers of Trump flags flapped alongside Old Glory flags and a solitary California flag that read, “Trump Country.”

There was even a sizable Latino presence.

The rallies have unsurprisingly drawn widespread attention and out-of-towners looking to join the fun. To clueless outsiders who think California is a sapphire of socialism, the Huntington Beach gatherings are surprising, even perplexing. How can such vivid displays of right-wing pique persist in such a blue state?

But even Californians can’t look away. Because we know they’re our doppelgangers.

Throughout our history, a significant chunk of the state’s residents have risen up as California inched leftward.

The anti-curfew protests that happened here over the weekend and across the state are a manifestation of the same tendencies that has seen Californians vote against gay marriage and housing desegregation in the past, and keep Proposition 13 — which keeps property taxes low for those who can afford property — and reject affirmative action this year.

Wearing a mask and acting for the common good during a pandemic, of course, should be a nonpartisan act. But in these polarized times of ours, our outgoing president and his followers see such common sense acts as lefty wimpiness.

In the past, it was the San Fernando Valley, San Diego and the Inland Empire that led the anti-lib revolt. Today, no place is more fertile for Golden State grievance politics than Huntington Beach.

Because, as always, participants think of themselves as guardians of the California Dream they fear is slipping away.

The story that locals like to broadcast to the world is a simple, even truthful one. Beaches and waves worthy of HB’s Surf City nickname. Largest Fourth of July parade west of the Mississippi. A haven for mixed-martial arts. One of the last places in Southern California with a healthy white working class.

But this veneer of gentility has always masked ugly truths. It remains a breeding ground for neo-Nazis, and has battled California Atty. Gen. Xavier Becerra so much over matters the rest of the state largely accepts — affordable housing policies, sanctuary state laws, coronavirus-provoked beach closures — that it should switch its nickname to Sue City.

Huntington Beach is the type of place where City Atty. Michael Gates can be so baldly partisan that he was a featured guest at a meet-and-greet for newly minted council member, mixed-martial artist and coronavirus truther Tito Ortiz. (Huntington is also the type of place that elects people like Ortiz).

It’s a city that riots every once in a while for surfing events, chaos that residents summarily blame on their cousins from Yucaipa. Where residents counter-protest anything that stinks of progressives, whether it was antiwar vigils during the Iraq war or a George Floyd solidarity gathering this summer. For that latter event, the city declared an 8 p.m. curfew that tellingly didn’t draw carloads of whining Trump Bros screaming tyranny.

All these traits have compounded on themselves to the point that the rest of Orange County now stereotypes HB residents as spittle-flecking, over-muscled, badly tattooed, ultra-tanned men and women whose idea of dressing up is matching Rainbow flip-flops with Oakley shades.

Yeah, HB has always been conservative — you can’t not be when voters kept sending Russian President Vladimir Putin’s favorite congressman, Dana Rohrabacher, back to Congress for decades. But as a lifelong Orange County resident, and someone who has kept an eye on Sore City for 20 years, I’ve seen the Huntington Beach ethos degrade from a hang-loose cheeriness into one of eternal anger.

Something seeped into the acai bowls and breakfast burritos these townies scarf down religiously, folks.

Gina Clayton-Tarvin has lived in Huntington Beach since 1993 and also remembers when the conservatives in town were more measured. She used to be one herself, and more than a few of them helped elect her in 2012 to the Ocean View School District Board of Trustees. But by then, said the sixth-grade schoolteacher, “people were starting to get upset because a Black man was in the White House.”

The election of Trump was like gasoline to this “vocal minority” of residents. But so was the reality of a changing city. People of color now make up nearly 40% of the population. Two progressive Democrats won council seats in the November election. And Clayton-Tarvin won reelection in 2016, ran unopposed this year, and is considering a City Council run in 2022.

Those demographic and political shifts, she says, have led to the spate of protests in recent years. But the ones surrounding the coronavirus are by far the dumbest.

“The level of cognitive dissonance that it takes to get out there at 10:01 and declare your freedom against this so-called tyranny is astounding,” Clayton-Tarvin said.

She placed direct blame on city leaders and Orange County law enforcement officials who have openly said they will not enforce curfews or mask mandates.

“If the City Council is not telling their police chief to enforce orders, then don’t you think that the general public will say, ‘Hey, that’s the place we should flock to’?” she said. “When children act out in my classroom, that’s what they do. They think, ‘I’m going to flaunt my ability to not follow the rules.’ And they do.”

That’s what I thought when I readied to leave the Sunday night shutdown. The protesters were in good spirits as they filed down Main Street toward the pier. They paid no attention to the homeless men settled in for the night in front of shuttered storefronts, or the restaurants that were cleaning up their tents.

Instead, a woman with a megaphone proclaimed, “We are the curfew breakers!” with all the glee of a playground dodgeball champion.