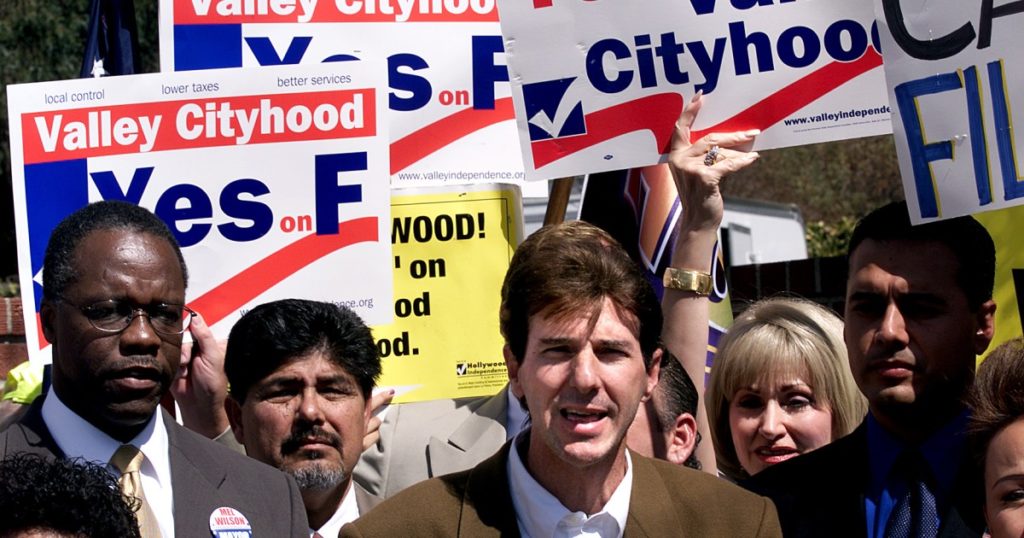 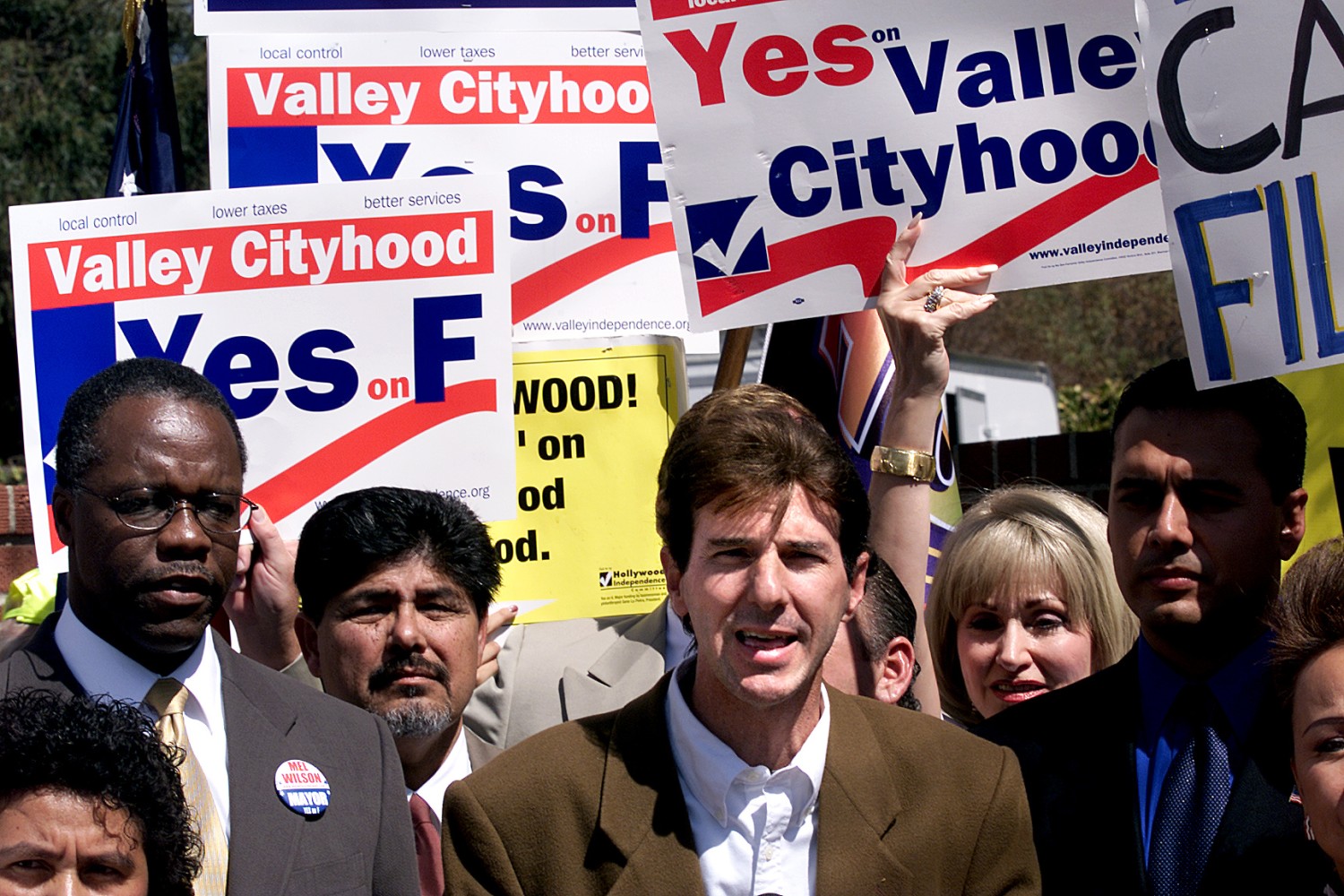 Jeff Brain knows a thing or two about tilting at the establishment. He did, after all, help lead the campaign that sought to create a city in the San Fernando Valley by breaking away about one third of Los Angeles’ population and nearly half of its land mass.

Now, the former leader of the Valley secession movement — which went down in defeat nearly two decades ago — is leading a different type of insurrection, this time in the social media sphere.

The 61-year-old Brain created CloutHub as an alternative to Twitter and Facebook, claiming that his startup will be more welcoming of diverse political views, less emotionally toxic and positioned to make money without selling the personal information of its members.

CloutHub has drawn a burst of media attention in recent weeks and a stream of new members, many of them refugees from Parler, the app where conservatives once congregated. Parler went dark last week after Apple and Google banned it from their app stores and Amazon removed it from its web platform for allegedly providing a haven for the violent extremism that exploded Jan. 6 at the U.S. Capitol.

The flight of some Parler-ites to CloutHub has bolstered Brain’s startup with new members, many of them offering paeans to the greatness of President Trump, recriminations about the allegedly “stolen” election, calls for “patriots” to fight back and QAnon-friendly fantasies about Trump remaining in power. One post Thursday, with 434 “likes,” depicted a 2016 conversation between the president of Ukraine and President-elect Joe Biden, featuring the comment “I hope they hang this bastard from the highest tree.”

Launched a little more than a year ago, CloutHub has set company records for new members each day this week. Since the start of the year, it has roughly matched the daily downloads of the video-sharing upstart Rumble; both drew about half the number of app downloads of another competitor, MeWe, according to the analytics firm Apptopia.

Still, the mobile fan base for CloutHub has a long way to go to catch up with more established competitors. Through Tuesday, it was approaching half a million downloads to online devices since the start of last year, compared with 2.6 million for Rumble, 6.9 million for MeWe and 11 million for the now-sidelined Parler, Apptopia reported. (The figures do not include customers who use the sites on computers.) Twitter claims well over 100 million active users.

But the CloutHub founder said the site’s burst of conservative momentum is merely a quirk of timing, created when those on the right became alienated by Twitter and Amazon’s actions against Trump and Parler. Brain said he welcomes people from across the ideological spectrum to CloutHub.

“It would be a failure if it was deemed to be only a conservative site,” Brain said. “I’m trying to bring people together to find common ground and solve problems.”

He promised that the tone of the site would become more ideologically balanced over time. And he said he has invited liberals — such as actor Richard Dreyfuss, who has a nonprofit that teaches young people civics — to come to CloutHub. (The Dreyfuss Civics Initiative didn’t immediately respond to a request for comment.)

Much as he did in pitching Valley cityhood in the late 1990s and early 2000s, Brain touts CloutHub with a populist refrain.

“There are many serious challenges facing us and we need a place where the people can organize and work together to reclaim control,” Brain said in a recent note to new members. The “control” he referred to ranges from citizens claiming their power to consumers getting more of what they want from social media services previously known for “invading our privacy and selling our data,” Brain said.

Author and future theorist Andrew Keen has long decried the fever swamp of lies and conspiracy-mongering on social media. He believes many of the outlets, old and new, will wear out their welcome and wither away. But he’s also concerned with big tech and government solutions that attempt to control content.

“Let the market decide,” Keen argued. “If you don’t like it, don’t buy into it.”

It has been a long and somewhat circuitous route that brought Brain from his Long Island roots through a period as a Los Angeles realtor and civic activist to his new incarnation as entrepreneur and resident of a gated community in the hills of south Orange County.

Among his community activities was the founding of the annual Sherman Oaks Street Fair. He went on to a failed run for the Los Angeles City Council. (Campaign buttons featured a cape-wearing superhero, “Brain Man.”) Community leaders chose him in the late 1990s to head Valley VOTE, the secession campaign.

“He was a person who got things done,” said Richard Close, another leader of the Valley cityhood crusade. “He was really persistent, just great at the day-to-day.”

His personal slip-ups — like failure to pay some taxes and registering with the American Independent Party, onetime home of segregationist George Wallace — became distractions during the campaign. Secessionists at the time accused The Times of raising those issues in a bid to thwart Valley cityhood. (Brain said he had been trying to choose no-party affiliation when he mistakenly registered with the Independent Party. And this week he said all his back taxes have “long since” been settled.)

“Jeff knew how to capitalize on an issue of the moment, and he was persistent on the things he was doing,” said Zev Yaroslavsky, a former city and county lawmaker who sometimes sparred with Brain but has not spoken to him in decades. “Jeff was a public relations whiz.”

Though cityhood failed in 2002, it was widely credited with spurring Los Angeles voters and leaders to rewrite the City Charter, which included the creation of neighborhood councils (now 99 in total) to represent the far-flung corners of the vast city.

Brain next veered in unexpected directions. First he helped run Smokey Robinson Foods, producing a line of frozen soul food trademarked with the name of the Motown legend. Then he spent nine years at Ciralight Global, a company that installs solar lighting systems.

“See, so I’m not only, just a conservative,” Brain said. “I actually do solar lighting.”

With his four children mostly grown, the man who had become synonymous with San Fernando Valley identity said he was ready for a change. He said he now lives comfortably in the gated Orange County enclave, having moved around 2012.

Brain declined to say who he supported in the presidential race or in the Republican effort to overturn President-elect Joe Biden’s victory.

“It doesn’t matter what my own view is. … I’m running a platform, and I’m neutral,” he said of CloutHub. “I think that’s a problem with Twitter and Facebook, that some people feel they’re imposing their views on their members.”

As an example of the kind of content that has been wrongly forbidden by other social media sites, he pointed to a video of doctors standing in front of the Supreme Court, claiming that the COVID-19 pandemic could be ended without facial masks and social shutdowns. He said voter fraud claims from the 2020 election also deserve an airing.

“If one dead person votes, is that fraud? Yeah, it is,” Brain said. “Did it affect the outcome of the election? Probably not, but it is fraud. … I think people are entitled to their feelings and their opinions.”

The site today teems with grievance, recriminations and conspiracy theories. Old falsehoods, such as President Obama’s alleged foreign birth, have been renewed. And new fantasies have emerged, such as a video claiming that House Speaker Nancy Pelosi’s laptop, seized during the Capitol Hill riot, proves that leftists committed the attack and that the U.S. military, loyal to Trump, will soon deploy to quell unrest in “blue cities.”

Another CloutHub member’s offering urged Trump followers to “stand down” on Inauguration Day, lest “the media and others” use further unrest as an excuse to “ban patriots.” That touched off a furious debate, with many commenters arguing for a showdown with the left.

“We stand down and it will only get worse, it’s time for us to bring the pain!!!!!” wrote one user. Another expletive-laden post echoed “Imagine if the founders stood down!” One charged that the “left weaponized the GHETTOS against WE, THE PEOPLE” and suggested that civil rights protesters would back down “if they got the s— shot out of them but good ONCE.”

He pledged that profane and threatening posts would be taken down as quickly as possible, asking members to help flag such violations. The site uses artificial intelligence to aid in that effort, but he acknowledged that — like many social media platforms that struggle to control hate speech and threats — CloutHub is in a “daily battle” to have moderation keep up with the sudden growth.

He vows that most CloutHub users will focus in the long run on the kind of local issues that were his métier during his days in the Valley.

“I don’t know if my neighbors are Democrat or Republican,” Brain said. “I just know that we are about our kids getting a good education and that our community is safe. I think that is where most people are.”

Brain said his site won’t bombard users with advertising. He expects about 10% of users to one day pay for premium services, such as politicians springing for special landing pages and commentators leasing spots for video channels.

The writer Keen said he empathizes with the dilemma of a 21st century audience — damned if it stays on social media, and damned if it flees.

“We have all been so ghettoized by all of these sites,” he said. “I don’t know many people who can escape. The ones who do, then they are lonely. They feel they don’t have any kind of community at all.”