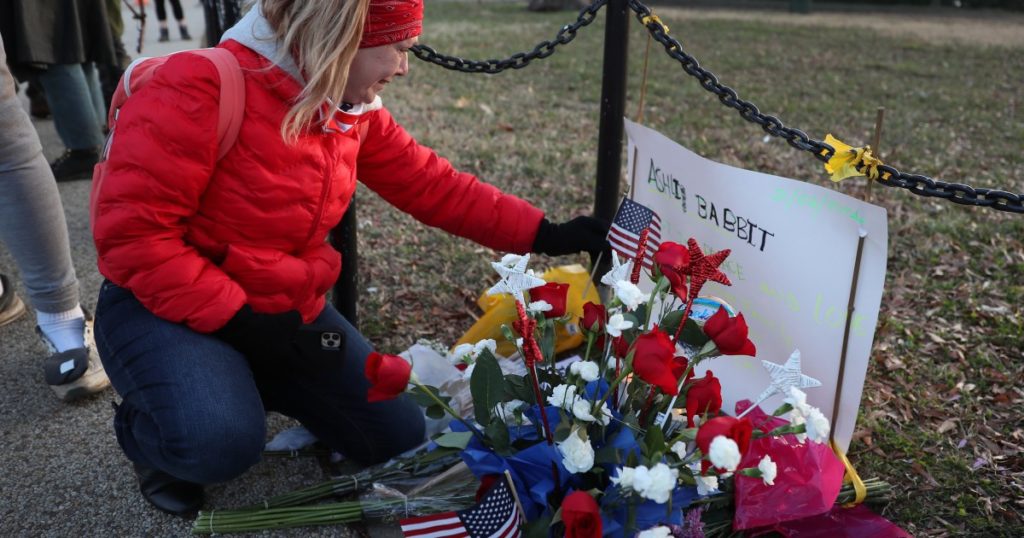 Ashli Babbitt — then named Ashli McEntee — was driving to the office when the anger inside her head hit a critical mark.

The San Diego County resident flipped on her cellphone and began to record.

“I’m like really heated, all of a sudden,” she began, turning her eyes from the road to look into the camera. I am so sick of these politicians in this goddamned state. I can’t take it anymore,” she said, her voice rising, her words pouring out so fast she barely had time to breathe. “They’re all worried about what Trump is doing. How about we worry about what the hell you’re doing!”

The source of her anger: border security, and so much more because of immigration. “California is suffering. Our homeless problem is out of control. Our drugs are out of control….

The November 2018 video carried a hint at the anger and mind-set that two years later drove the 35-year-old Air Force veteran to join Trump supporters in Washington and then push her way into the Capitol. Ashli Babbitt was shot and killed by Capitol Police on Wednesday while trying to climb through the broken glass of a barricaded door leading to the chamber where the House of Representatives was in the process of certifying Trump’s presidential defeat.

Family members identified her from social media video of the shooting long before authorities gave them official notification.

Her husband and family members made little public comment, but former husband Timothy McEntee, who was stationed with her at Eielson Air Force Base in Alaska, described Babbitt as “a wonderful woman with a big heart and a strong mind.”

He wrote: “She loved America with all her heart. It’s truly a sad day.”

The couple, both security specialists whose tasks included finding explosives, were featured in a 2008 base publication for the adoption of military working dog named Sorbon. Another military publication credited Babbitt with at least eight deployments between the Air Force and the Air National Guard, including in Iraq.

Public records show Babbitt, married in 2019, had since 2017 owned a San Diego-area swimming pool service. Court records show no criminal history, and civil suits were limited to a credit card collection against her husband and a lone business dispute. She featured pictures of herself and her husband, and support for the military, on her professional sites.

But Babbitt’s social media presence was entirely different, promoting not only messages of support for Trump but also hate against those who ordered COVID-19 restrictions, distrust of the mainstream media, and a buy-in for QAnon conspiracy theories, including that Disney harbored pedophiles and thousands of children were mysteriously missing, and — looming large above all else — the country she loved was in danger. She promoted tweets that characterized Black people as criminals, even as she supported fellow Trump supporters who are Black.

She wrote that Trump is “one of gods greatest warriors … leading the way for us patriots to rise without fear against all we are facing.”

The day before her death, facing the prospect of weather-canceled flights to the capital, Babbitt replied on Twitter, “Nothing will stop us….they can try and try and try but the storm is here and it is descending upon DC in less than 24 hours….dark to light!”

“Dark to light,” often mixed with Christian references, is an anthem for followers of QAnon, and by an Atlanta-based trial attorney of which Babbitt was a close follower, L. Lin Wood.

In early December, Babbitt retweeted Wood’s exhortation, “give me liberty or give me death,” alongside someone else’s post praising pro-Trump demonstrators kicking, punching and beating a masked anti-fascist demonstrator with the heavy wooden poles bearing their U.S. flags.

“Dark to light! Let freedom ring and god bless America! God knows, god sees and he is incoming! Nothing can stop what is happening,” Babbitt also Tweeted in December, in objection to Democrats who she said had sold their souls to Satan.

In 2012, Babbitt’s political causes were much milder. On Facebook, for instance, she supported Ron Paul’s Libertarian candidacy for president. By 2018, she was voicing opposition to all gun laws, and great concern over area crime she perceived as caused by incoming immigrants.

“I want politicians to start coming down here and telling me that my reality is a lie,” Babbitt said in a kitchen video. “The border is an absolute [mess]…. There’s riots, there’s arrests, there’s rapes, there’s drugs, there’s outcries, there are tons of issues, there are abandoned kids.”

When COVID-19 forced business closures and masking orders in San Diego, Babbitt’s often expletive-filled anger was directed at one of the sources of those requirements: Gov. Gavin Newsom.

A San Diego County organizer of a campaign to remove Newsom from office was surprised to learn that Babbitt was a local supporter of the cause, attending many of the same rallies in the area.

Stephanie Melvin, who works at a medical office but opposes masking orders, said she is struggling with COVID-19 orders that prevent her from evicting a tenant who refuses to pay rent. And Melvin is angered by what she sees as arrogance and elitism in political leaders, such as Newsom’s mask-free attendance at an exorbitant dinner with lobbyists in November. “Our beautiful state is burning to the ground because of him,” she said.

She also shared some of Babbitt’s mistrust of the media, including whether those on the political right were behind Wednesday’s mass siege of the Capitol.

“It’s the left that is consistently violent,” Melvin said.

Teri Figueroa and Alex Riggins of the San Diego Union-Tribune contributed to this report.