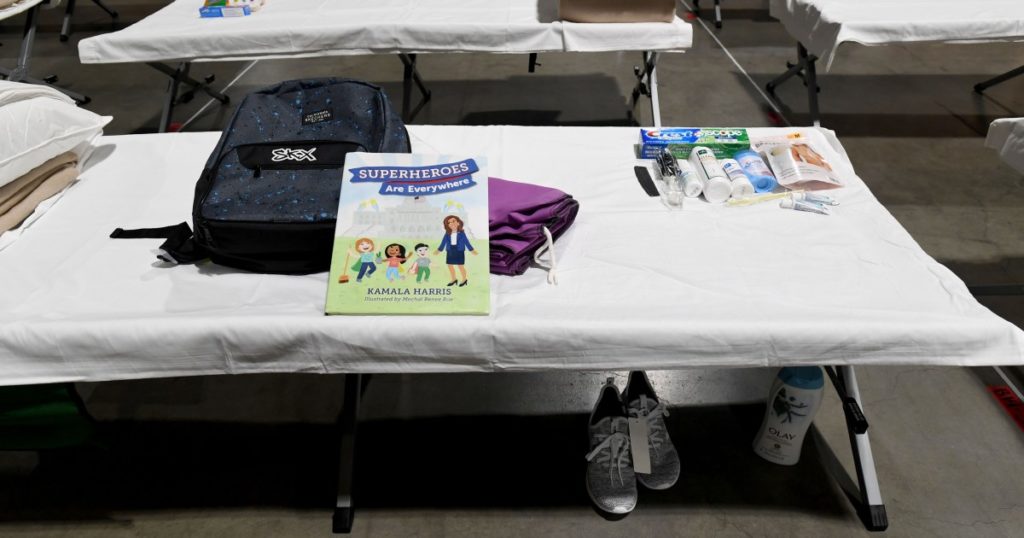 Last week, Long Beach announced it would repurpose its convention center to temporarily house up to 1,000 unaccompanied migrant children arriving at the U.S.-Mexico border.

Officials knew that wrangling that many children would be a tall order, so they launched a drive to fill a library with books for the children to read. Someone donated Vice President Kamala Harris’ 2019 children’s book “Superheroes Are Everywhere.”

That book was laid on a cot last Thursday and a news service photographer, who declined to comment to The Times, took a photo of it.

The New York Post wrote a front-page story reporting that federal officials were including the book as part of the “welcome kits” given to migrant children.

Harris “hasn’t been to the border to address a crisis she was tasked to help fix — but a children’s book she wrote is waiting there for young migrants who are being welcomed into the country,” the story originally read.

The Biden administration’s weakness caused a surge of illegal immigration.

Now they’re forcing taxpayers to buy Kamala Harris’s book to give to those illegal immigrants? https://t.co/pjpUmFRcnF

But no books, including the one in the photo, were included in welcome kits, Zhan Caplan, a spokesman for the Department of Health and Human Services, told The Times Wednesday.

“Children do not receive books as part of a welcome kit,” Caplan said in a statement. “No taxpayer dollars were used to purchase Vice President Harris’ book.”

After the Washington Post this week fact-checked the tabloid’s story, the New York paper reportedly deleted then amended its story, according to the Post.

Laura Italiano, the reporter whose byline was on the story, tweeted Tuesday that she had resigned from the publication. Italiano did not respond to requests for comment from the Times but tweeted she was “ordered” to write the story and “failed to push back hard enough.”

The Kamala Harris story — an incorrect story I was ordered to write and which I failed to push back hard enough against — was my breaking point.

While some online offered support, others questioned Italiano’s reporting on at least one other story.

The ongoing Long Beach book drive had more than 3,000 books donated, according to Kevin Lee, a city spokesman.

The kids “being able to make individual and personal choices on what they read, what they play with, what they wear and the like, is so important during these very challenging times for the children,” Lee told The Times in an email.