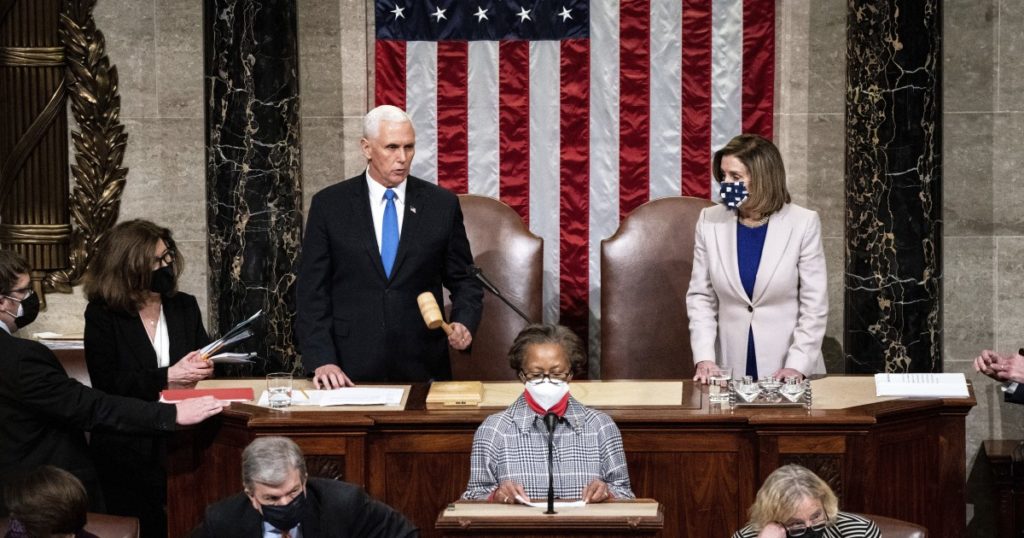 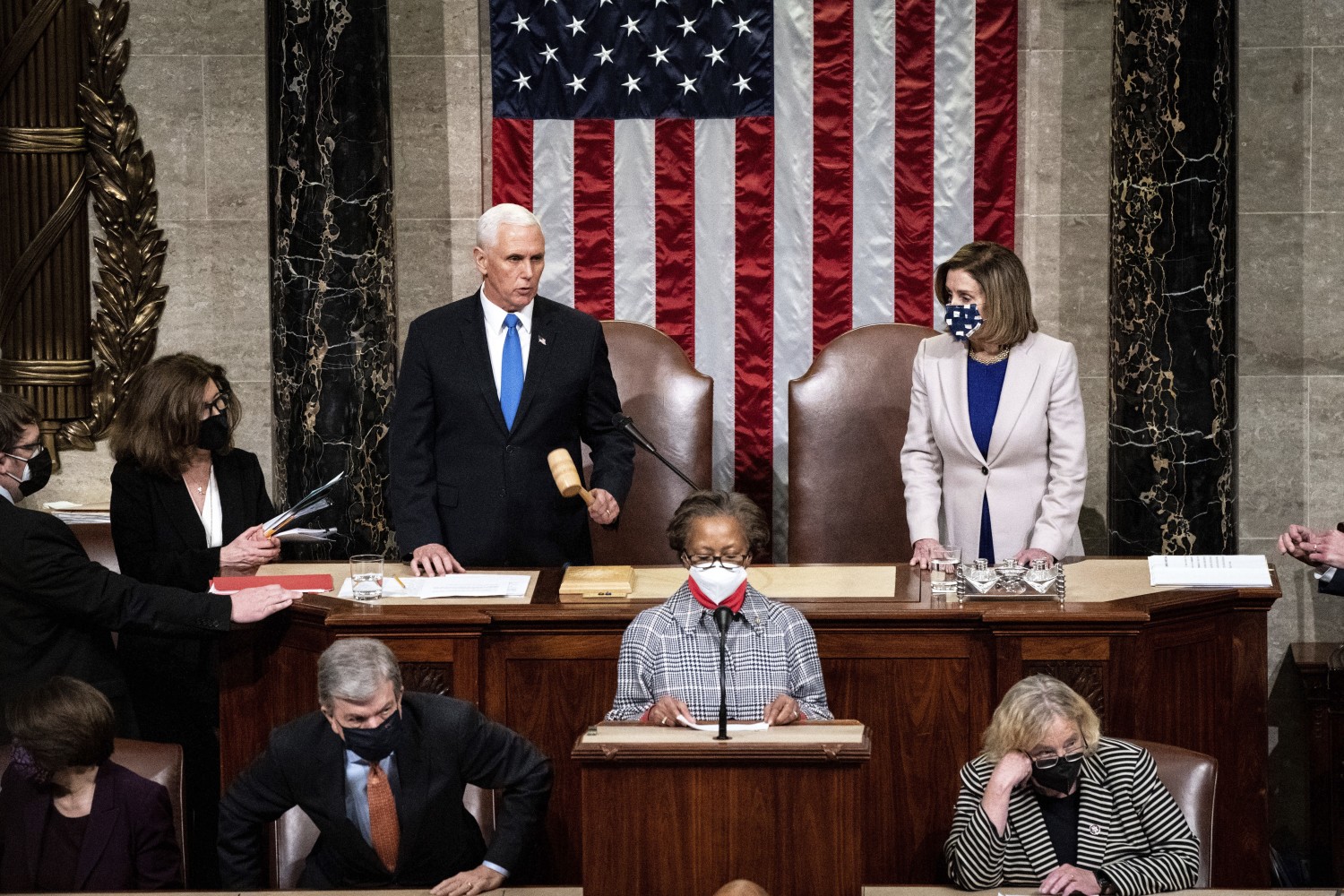 Citing President Trump’s “assault on our democracy,” Speaker Nancy Pelosi said Sunday for the first time that the House would move to impeach him in the wake of last week’s ransacking of the U.S. Capitol, unless Vice President Mike Pence and the Cabinet agree to remove him under the 25th Amendment.

Pelosi’s plan, disclosed in a letter to colleagues, came as a second Republican senator called on Trump to resign over his incitement of the mob that attacked the seat of Congress on Wednesday, marking an intensifying push by lawmakers to force Trump from power before his term ends at noon on Jan. 20.

“We are calling on the vice president to respond within 24 hours,” Pelosi wrote. “Next, we will proceed with bringing impeachment legislation to the floor. In protecting our Constitution and our democracy, we will act with urgency, because this president represents an imminent threat to both.”

With administration officials showing little appetite to remove Trump by invoking the 25th Amendment — and more than 210 Democrats already signed on to proposed articles of impeachment — Trump appears more likely to be impeached by the House for the second time, potentially making him the first U.S. president to hold that unwelcome distinction. He was impeached in 2019 for pressuring Ukrainian government officials to investigate then-presidential rival Joe Biden but later acquitted by the Senate.

Pelosi’s letter provided no timetable for an impeachment vote. Articles of impeachment are expected to be introduced in the House on Monday, with a vote possible as early as Wednesday. That would make it one of the fastest presidential impeachments ever conducted.

Pelosi last week had called on Pence to invoke the 25th Amendment — which sets out the procedure for removing an unfit president — and raised the prospect of impeachment, but the new deadline for action aims to force the vice president’s hand.

Earlier Sunday, Republican Sen. Patrick J. Toomey of Pennsylvania told NBC’s “Meet the Press” that the president should “resign and go away as soon as possible.” He became the second GOP senator, after Sen. Lisa Murkowski (R-Alaska), to tell the president that it was time to go.

But although Toomey agreed that the president’s actions were impeachable, he demurred when asked whether he would vote to convict Trump in the Senate.

“I don’t know, as a practical matter, that it is actually even possible to do an impeachment in the number, in the handful, of days that are left,” the senator said on CNN.

With Trump’s term ending in just 10 days, Toomey and several other Republicans argued that if the House impeached the president, a Senate trial would not occur until after Trump had already left office and was a private citizen. Outgoing Senate Majority Leader Mitch McConnell (R-Ky.) has said all 100 senators would have to consent to fast-tracking a trial or any business of substance before Inauguration Day, an unlikely prospect.

Democrats say impeachment is still vital because it signals that Trump’s behavior is deeply unacceptable, and could also result in barring him from running for office again, as he has hinted he might.

Before voting on impeachment, Pelosi said that the House would try on Monday to pass by unanimous consent a resolution calling for administration officials to invoke the 25th Amendment. It is unlikely that measure will pass, so Pelosi said she would then bring the resolution to a vote on Tuesday.

Rep. Ted Lieu (D-Torrance) said the resolution votes provide Trump and the GOP with a chance to avoid another impeachment drama. “This sequencing by @SpeakerPelosi is correct,” he tweeted. “Impeachment is one of the gravest powers of Congress. It should always be our last option. If @POTUS doesn’t resign or if @VP doesn’t invoke the 25th Amendment, then we will Impeach.”

In response to concerns that pursuing impeachment would distract the new Congress and the nation from coping with the pandemic and supporting President-elect Biden’s agenda, House Majority Whip James E. Clyburn of South Carolina raised the possibility of delaying the Senate trial for up to several months.

He said even that if the House impeached Trump this week, Pelosi (D-San Francisco) could refrain from immediately sending the articles of impeachment to the Senate for trial. That would allow Biden to deal with crucial early business, such as securing confirmation for key Cabinet nominees and taking steps to rein in the coronavirus that is killing Americans at a record pace.

Last week, the number of daily deaths from COVID-19 reached 4,000 for the first time, pushing the national toll to nearly 375,000.

“Let’s give President-elect Biden the 100 days he needs to get his agenda off and running,” Clyburn said on CNN’s “State of the Union.”

Four days after the Capitol was broken into and ransacked, many lawmakers still seemed to struggle for words to describe an event unprecedented in modern American history. The violence — which left five dead, including a Capitol police officer — forced lawmakers to flee and temporarily delayed their formal counting and announcement of electoral votes in Biden’s victory, as required by the Constitution.

Incoming Senate Majority Leader Charles E. Schumer (D-N.Y.) said Sunday he had urged FBI Director Christopher Wray a day earlier to “relentlessly pursue” the Capitol attackers, about 100 of whom have been arrested and charged.

Sen. Chris Coons (D-Del.) appearing Sunday on CBS’ “Face the Nation,” urged authorities to “flood the zone around the Capitol with federal resources” for the inauguration.

Although the president has yet to publicly express any remorse over Wednesday’s mob attack, his most ardent defenders, including Rep. Devin Nunes (R-Tulare), pivoted swiftly to grievances over the permanent termination of Trump’s personal account on Twitter, his favorite social media platform.

Sen. Roy Blunt (R-Mo.) suggested — as some other senators did after Trump’s first impeachment last year — that the president had learned his lesson.

“My personal view is that the president touched the hot stove on Wednesday and is unlikely to touch it again,” said Blunt, interviewed on “Face the Nation.” He said Trump should serve out the remainder of his term.

“Every second, every minute, every hour that Donald Trump remains in office presents a danger to the American people,” Jeffries said on “Meet the Press.” Trump, he said, “may be in the Twitter penalty box, but he still has access to the nuclear codes.”

Many Democrats have characterized the Capitol attack as a logical culmination of Trump’s years of hateful rhetoric, demonizing opponents and undermining democratic principles. But although some longtime Trump loyalists broke with him over the violent episode, many insisted at the same time that it was a departure from the overall trajectory of his presidency.

“Wednesday was a fundamental threat to the United States,” former White House Chief of Staff Mick Mulvaney, who resigned his position as a special envoy to Northern Ireland in the aftermath of the Capitol attack, said on NBC. But he defended Trump’s previous record, as did Toomey.

A few elected Republicans, including Maryland’s Gov. Larry Hogan, faulted both Trump and the members of Congress who backed his falsehood that the election was stolen.

“There is no question in my mind that he was responsible for inciting this riotous mob,” Hogan, interviewed on CNN, said of Trump. He also said he was “embarrassed and ashamed” of lawmakers who voted to contest the election results even after the attack, though he declined to call explicitly for their expulsion.

“I think history will decide how they’re remembered,” he said.